Anyone who knows a bit about Christian theology and church history knows that any biblical truth can be distorted, twisted or pushed to an unbiblical extreme. Heretical groups and cults both routinely operate this way: they will take one biblical teaching and push it much further than it was meant to be, and/or ignore other vital biblical truths in the process.

The other extreme (affirming his deity while denying or diminishing his humanity) is also to be avoided like the plague, and is found in such heresies as Docetism and Apollinarianism. The biblically balanced view (Jesus was both fully divine and fully human) was affirmed in the Athanasian Creed and at the Council of Chalcedon.

Students of the early creeds and councils would know all about this. But such things happen all the time in church history. There are major theological pendulum swings always occurring. One group goes to one unbiblical extreme, and in order to counter that, another group goes to another, opposite, unbiblical extreme. Both groups miss the biblical balance.

Plenty of examples occur even today. As one example, if some groups go way too far in seeking the miraculous, and claiming everyone can always be healed at any time if they just have enough faith, then the opposite error arises which states that miracles basically cannot happen today and we should be wary of any healings, etc.

Both extremes in my books need to be avoided. Similarly, the prosperity gospel insists that we can all live like kings and only a lack of faith keeps us from being filthy rich. The other extreme is to insist that all wealth is wrong and we all must live in abject poverty if we want to be Christ’s disciples. 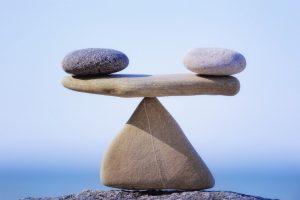 As always, getting the biblical balance right is essential. If we don’t, we easily veer into heresy or the cults. Francis Schaeffer often use to picture this as follows: in our desire to back away from some menacing dragon in front of us, if we are not careful, we may go too far backwards and end up falling off a cliff.

Both dangers must be avoided. I say all this because I have been revisiting one of C. S. Lewis’ most important books, Mere Christianity. This volume originally began as a set of radio broadcasts which were published in three separate books in 1942, 1943 and 1944.

The last one, “Beyond personality” became part four of the fuller version of the book most folks have today. There are 11 sections to this, and I want to quote from several of them. He begins part four with these words:

Everyone has warned me not to tell you what I am going to tell you in this last book. They all say “the ordinary reader does not want Theology; give him plain practical religion.” I have rejected their advice. I do not think the ordinary reader is such a fool. Theology means “the science of God,” and I think any man who wants to think about God at all would like to have the clearest and most accurate ideas about Him which are available. You are not children: why should you be treated like children?

In the section “Two Notes” he speaks about various extremes to avoid. He discusses rugged individualism on the one hand, and crushing totalitarianism on the other. He then goes on to say this:

I feel a strong desire to tell you – and I expect you feel a strong desire to tell me – which of these two errors is the worse. That is the devil getting at us. He always sends errors into the world in pairs – pairs of opposites. And he always encourages us to spend a lot of time thinking which is the worse. You see why, of course? He relies on your extra dislike of the one error to draw you gradually into the opposite one. But do not let us be fooled. We have to keep our eyes on the goal and go straight through between both errors. We have no other concern than that with either of them.

In the next few sections he looks at various pairs of opposites – or what seems to be paradoxical truths about Christianity. In one section he asks, “Is Christianity Hard or Easy?” The short answer is this: it is both. If we insist that it is a piece of cake, we will get into all sorts of strife. But if we insist it is far too difficult, we will also get into trouble.

Obviously if you think you can live the Christian life by your own efforts you are only kidding yourself. It can’t be done. But the promised indwelling Holy Spirit makes the impossible possible. Thus just trying to ‘be good’ won’t cut it. Says Lewis:

The Christian way is different: harder, and easier. Christ says ‘Give me All. I don’t want so much of your time and so much of your money and so much of your work: I want You. I have not come to torment your natural self, but to kill it. No half-measures are any good. I don’t want to cut off a branch here and a branch there, I want to have the whole tree down. I don’t want to drill the tooth, or crown it, or stop it, but to have it out. Hand over the whole natural self, all the desires which you think innocent as well as the ones you think wicked – the whole outfit. I will give you a new self instead. In fact, I will give you Myself: my own will shall become yours.’
Both harder and easier than what we are all trying to do. You have noticed, I expect, that Christ Himself sometimes describes the Christian way as very hard, sometimes as very easy. He says, ‘Take up your Cross’ – in other words, it is like going to be beaten to death in a concentration camp. Next minute he says, ‘My yoke is easy and my burden light.’ He means both. And one can just see why both are true.

The terrible thing, the almost impossible thing, is to hand over your whole self – all your wishes and precautions – to Christ. But it is far easier than what we are all trying to do instead. For what we are trying to do is to remain what we call ‘ourselves’, to keep personal happiness as our great aim in life, and yet at the same time be ‘good’. We are all trying to let our mind and heart go their own way – centred on money or pleasure or ambition – and hoping, in spite of this, to behave honestly and chastely and humbly. And that is exactly what Christ warned us you could not do. As He said, a thistle cannot produce figs. If I am a field that contains nothing but grass-seed, I cannot produce wheat. Cutting the grass may keep it short: but I shall still produce grass and no wheat. If I want to produce wheat, the change must go deeper than the surface. I must be ploughed up and re-sown….
He never talked vague, idealistic gas. When He said, ‘Be perfect,’ He meant it. He meant that we must go in for the full treatment. It is hard; but the sort of compromise we are all hankering after is harder – in fact, it is impossible. “It may be hard for an egg to turn into a bird: it would be a jolly sight harder for it to learn to fly while remaining an egg. We are like eggs at present. And you cannot go on indefinitely being just an ordinary, decent egg. We must be hatched or go bad.

In the next section, “Counting the Cost” he continues this theme. He says this:

The practical upshot is this. On the one hand, God’s demand for perfection need not discourage you in the least in your present attempts to be good, or even in your present failures. Each time you fall He will pick you up again. And He knows perfectly well that your own efforts are never going to bring you anywhere near perfection. On the other hand, you must realise from the outset that the goal towards which He is beginning to guide you is absolute perfection; and no power in the whole universe, except you yourself, can prevent Him from taking you to that goal. That is what you are in for. And it is very important to realise that. If we do not, then we are very likely to start pulling back and resisting Him after a certain point….
Here is another way of putting the two sides of the truth. On the one hand we must never imagine that our own unaided efforts can be relied on to carry us even through the next twenty-four hours as “decent” people. If He does not support us, not one of us is safe from some gross sin. On the other hand, no possible degree of holiness or heroism which has ever been recorded of the greatest saints is beyond what He is determined to produce in every one of us in the end. The job will not be completed in this life: but He means to get us as far as possible before death.

Plenty more such quotes could be pulled from this classic work. If you have not yet read Mere Christianity you are missing out big time. And if you read it before, it may be time to read it again. It is one of the great works of Christianity of the past century, and it always pays handsome dividends for any re-reading.

So let us go on to Christian maturity, striving to get the biblical balance right in all areas, and avoiding unbiblical extremes. It may be difficult to always achieve this, but we must nonetheless strive for it.