Um, how many times do we have to say, “We told you so”? Pro-family activists have been warning for decades now that when we tamper with marriage and family, we end up on a dangerous slippery slope where anything goes. Everything once illegal and immoral now becomes legal and moral.

We have been through the whole gamut on this: heterosexual marriage which was once recognised and honoured in law as the sole legitimate place for human sexuality and child rearing has been chipped away at over the decades and is now all but destroyed.

First cohabiting couples were allowed into the legal mix. Many of us at the time warned that legalised homosexuality and homosexual marriage would be next. We were of course viciously ridiculed and mocked for offering such warnings, but of course we were proven to be completely correct. 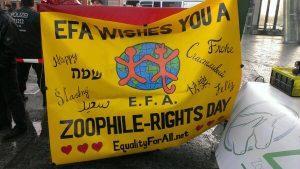 Then we warned that as all things homosexual were being recognised and legalised, the slope would just get a whole lot more slippery. Group sex and marriage, incest, and even bestiality would be next. We were again howled down and treated with derision. But sure enough, we are well down the path with all three of these new “rights”.

Consider this shocking news item just out of Canada. The headline is real creepy: “Most bestiality is legal, declares Canada’s Supreme Court”. The article begins:

Sex acts with animals are legal in Canada, so long as there is no penetration involved, according to a surprise ruling issued by the Supreme Court. The determination stemmed from a case involving a British Columbia man convicted of 13 counts sexually assaulting his stepdaughters – including one count of bestiality. But the man, identified only as “DLW”, was acquitted of the bestiality count with the new ruling.
DLW’s attorneys argued that bestiality linked to “buggery” – or sodomy – with animals beginning with an 1892 criminal code. Bestiality was first used in a 1955 code, but still was not defined to encompass every sex act with animals. “Although bestiality was often subsumed in terms such as sodomy or buggery, penetration was the essence – ‘the defining act’ – of the offence,” the court said. Thus, the court ruled by a 7–1 majority that bestiality required penetration.

Justice Rosalie Abella was the lone dissenter, and had suggested that the court deny the appeal. “Acts with animals that have a sexual purpose are inherently exploitative whether or not penetration occurs,” she wrote. Representatives for Animal Justice, who brought the case to the Supreme Court, said the ruling should encourage Parliament to act on changing “outdated” laws that fail to protect the country’s animals.
“As of today, Canadian law gives animal abusers license to use animals for their own sexual gratification,” executive director of Animal Justice Camille Labchuk told The Independent via emailed statement. “This is completely unacceptable, contrary to societal expectations, and cannot be allowed to continue.”
Animal Justice implored Parliament to pass the Modernizing Animal Protections Act. “This much-needed bill updates the animal offences in the Criminal Code,” Ms Labchuk added, “and closes this dangerous loophole to make it crystal clear that all forms of sexual activity between a person and an animal are unacceptable.”

Yes, animal welfare is important, but I would have thought the complete destruction of Western culture is even more important. By taking such a cavalier view of bestiality, the Canadian courts are simply contributing to the moral and spiritual sinkhole that Canada has now become.

One commentary on this news item rightly stated:

The question is a troublesome one here in the U.S. as well, dividing liberals and serving as a watchword to conservatives. Recently, for instance, animal rights activists in Ohio were rallying for the legislature to make it more explicit that sex between humans and animals is forbidden by state law.
In April, animal advocates were seen protesting at the state capital in Columbus to raise awareness that Ohio has no law outlawing sexual exploitation of animals after a 61-year-old man was arrested for committing sex acts with dogs. Ohio is one of only eleven U.S. states that don’t have any bestiality laws on the books, advocates say.
The U.S. and Canada are no outliers in having a mixed record when dealing with bestiality. A recent article from the Daily Mail lamented the troubling new trend of “animal brothels” rising in Germany as many humans are claiming sex with animals is just another “lifestyle choice.”

Sadly there are also many calling for the legalisation of bestiality, or zoophilia. Yes, there is even a “scientific” name now assigned to those who want to enjoy “equal love” with animals. And these are not just a few cranks and misfits. Sadly we have academics, educational institutions, and plenty of other respectable type groups calling for this. Indeed, simply google the euphemistic term “zoophilia”. When I last did this some 1.2 million hits came up. There are all sorts of zoophilia sites, organisations, groups, societies and advocates out there seriously promoting all this.
In fact, there is far too much material here for me to do proper justice to it, so let me just select a few representative examples. Let’s begin with this headline: “Those Who Practice Bestiality Say They’re Part of the Next Sexual Rights Movement.” The headline alone says it all: If the homosexual lobby can get their way with full recognition and legalisation, then why can’t we?
The article speaks of a Cody Beck who is quite serious in seeing his “rights” recognised: “Being a ‘zoophile’ in modern American society, Beck says, is ‘like being gay in the 1950s. You feel like you have to hide, that if you say it out loud, people will look at you like a freak.’ Now Beck believes he and other members of this minority sexual orientation, who often call themselves ‘zoos,’ can follow the same path as the gay rights movement. Most researchers believe 2 to 8 percent of the population harbors forbidden desires toward animals, and Beck hopes this minority group can begin appealing to the open-minded for acceptance.”

I concluded that section as follows:

It may not be welcome to hear some of us saying these words, but we told you so. We really did warn you. But most of our warnings have fallen on deaf ears. Thus the slope is now basically beyond repair.

9 Replies to “This Slippery Slope is Going to the Dogs”