I am reading through the Psalms once again. One thing that stands out like a sore thumb is how often David or the psalmist speaks about enemies. It is a constant theme throughout all 150 psalms, and when something is spoken of so often and so repeatedly, we had better sit up and take notice. 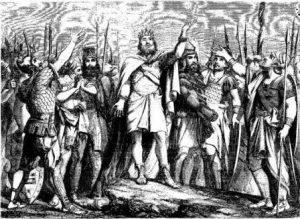 Sometimes a prayer for protection from one’s enemies is also coupled with a call for a divine curse on these enemies. Indeed, often there are calls by the psalmist for divine judgment, revenge, vindication and destruction of these enemies.

But despite all the various permutations and combinations, the concept of enemies is found throughout the psalter. If one simply looks at the various terms used, we see just how widespread this theme is. If you look for terms like enemy, foe, the wicked, or phrases about those who oppose the psalmist, barely a psalm is found free of such language and imagery.

I have just gone through the first 30 psalms, and written down every reference I could find to enemies and the like, and I found a whopping 90 per cent of them (27 out of 30) contained such language or thoughts. Only three psalms did not seem to contain any of this, at least directly (Ps. 19, 24, 29).

That is quite amazing. And this would basically carry through the entire psalter. Let me briefly offer just some of these passages here:

Ps 3:7 Arise, Lord!
Deliver me, my God!
Strike all my enemies on the jaw;
break the teeth of the wicked.

Ps 6:10 All my enemies will be overwhelmed with shame and anguish;
they will turn back and suddenly be put to shame.

Ps 7:6 Arise, LORD, in your anger;
rise up against the rage of my enemies.
Awake, my God; decree justice.

Ps 8:2 Through the praise of children and infants
you have established a stronghold against your enemies,
to silence the foe and the avenger.

Ps 13:2 How long must I wrestle with my thoughts and day after day have sorrow in my heart? How long will my enemy triumph over me?

Ps 18:37-43 I pursued my enemies and overtook them;
I did not turn back till they were destroyed.
I crushed them so that they could not rise;
they fell beneath my feet.
You armed me with strength for battle;
you humbled my adversaries before me.
You made my enemies turn their backs in flight,
and I destroyed my foes.
They cried for help, but there was no one to save them—
to the Lord, but he did not answer.
I beat them as fine as windblown dust;
I trampled them like mud in the streets.
You have delivered me from the attacks of the people;
you have made me the head of nations.

Ps 25:2 I trust in you;
do not let me be put to shame,
nor let my enemies triumph over me.

Ps 25:19-20 See how numerous are my enemies
and how fiercely they hate me!
Guard my life and rescue me;
do not let me be put to shame,
for I take refuge in you.

Ps 30:1 I will exalt you, Lord,
for you lifted me out of the depths
and did not let my enemies gloat over me.

And even the famous 23rd Psalm discusses this:

Ps 23:5 You prepare a table before me
in the presence of my enemies.

Figurative language can be used as well, describing the enemies in terms of beasts. For example, in Ps 22 we read about the psalmist (and Christ himself as the New Testament appropriates this), being scorned, mocked, and surrounded by bulls, dogs, lions, and wild oxen. Verse 16 makes it clear that these are human beings: “Dogs surround me, a band of evil men encircles me; they pierce my hands and my feet.”

Indeed, we find all the same military, fighting and warfare imagery in the NT. Sure, this is often about our spiritual foes and our battles in the heavenlies, but such spiritual warfare is manifest on planet earth. We fight against Satan and evil powers of darkness, but these can well involve cultural, legal, social and political battles.

We have opposition as Christians – not only demonic opposition but enemies of flesh and blood. There are those who oppose us, hate us, and want us silenced. There are groups and individuals and ideologies which all war against the faith and against the believer. We dare not be naïve about all this.

For example, if you are preaching the gospel on a street corner, and an angry atheist comes up to you and spits in your face, this is an attack of a physical enemy (who we must pray for and seek to win to Christ) as well as an obvious attack of a spiritual enemy – Satan is using such people to do his evil bidding.

So the Christian will have opposition, enemies and persecution. Jesus and the disciples often warned us about this. And how we respond to such enemies is important. I have discussed elsewhere how there can even be a place for NT believers to pray as the psalmists did, even asking for vindication and seeing the enemies routed:

Another point to make is the psalms were of course songs used in corporate worship for Israel. So as they praised and worshiped God, they were not at all shy about speaking about their foes, about asking for protection, and seeking God’s righteous judgment on their enemies.

If that was good enough for David and others, it should be good enough for us. The normal Christian life is to have opposition. The real disciple of Christ will have enemies. This is to be expected, and if you find yourself completely free of opposition or enemies, then you may need to ask yourself some hard questions about your Christian commitment.

By the way, some of you may have noticed that my title comes from Winston Churchill. He once famously quipped: “You have enemies? Good. That means you’ve stood up for something, sometime in your life.” That is certainly how I find things.

Whenever you stand strong for Jesus Christ – especially in public – you will get plenty of opposition and make plenty of enemies. Sorry, but this simply goes with the territory. As I say, it is the normal Christian life. This shows the folly of seeking at all costs to be men-pleasers and trying to keep everyone happy.

It just does not work that way. We either seek to please God or we seek to please men, but we cannot have it both ways. Of course we seek to be wise, tactful and careful as we represent Christ to a hostile world. But no matter how gracious and winsome we may be in this, we will still provoke strong negative reactions.

And how can this not be the case? Jesus was the most loving and gracious person to walk the earth, yet he made enemies all the time – so much so that they eventually crucified him. That was the norm for him, and it will be of necessity the norm for us.

So let me repeat the wise words of Churchill: “You have enemies? Good. That means you’ve stood up for something, sometime in your life.” Or, if you prefer, two words from two great saints:

“I fear much for many professing Christians. I see no sign of fighting in them, much less of victory. They never strike one stroke on the side of Christ. They are at peace with His enemies. They have no quarrel with sin. I warn you, this is not Christianity. This is not the way to heaven.” J C Ryle

“Though you and I have stepped from the kingdom of darkness into the kingdom of God’s dear son, we are still surrounded by a culture controlled by God’s great enemy, satan. We must live in it from the moment we accept Christ as our saviour until judgement falls. We, too, are encompassed by one who was once our king, but is now our enemy. It is just plain stupid for a Christian not to expect spiritual warfare while he lives in enemy territory.” Francis A Schaeffer

6 Replies to “You Have Enemies? Good”