Sometimes you can learn something from watching a bit of television. And sometimes you might even find some spiritual truths being illustrated there. Hey, I will take truth wherever I can find it – at least for the most part. So let me present a few biblical truths as exemplified in some current TV shows.

There seems to be one recent genre of shows involving an expert coming along to rescue a failing business. These can be restaurants or hotels or even bakeries, but they are all struggling and unless something is done and done soon, the business will likely go bust. 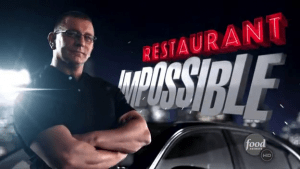 A restaurant may be in a real bad way, so an expert cook and problem solver and his team will come along and seek to do a radical transformation. Often they have just a few days to do this, with limited funds. So they will revamp the menu, redecorate the place – usually inside and out – and do a pretty radical transformation.

Often the business owners will at first be a bit resistant and opposed to such hardcore changes. They think and hope that cosmetic changes might suffice, when the experts know that unless something really radical takes place, they are just dreaming and the business will go belly-up.

So the experts will exercise what they will call tough love. They care about the business and the owners, and they know that unless real tough decisions are made with no nonsense, they will be wasting their time. Thus these experts will not mess around: they will be very blunt and forthright.

If the food on the menu stinks, they will say so. If the place looks hideous, they will say it. If the staff are doing a lousy job, they will not be afraid to chew them out and make some ultimatums. If the managers are not really being managers, they will certainly get that message.

So the expert will pull no punches. He or she will tell it like it is, and will have zero patience for cheap excuses, carelessness, game-playing, apathy or anything else. If these folks want their business to succeed, they must make drastic changes and be willing to pay the price to make it work.

And many times these experts end up being counsellors as well. Often a place may be owned by a family or a couple who are not getting along very well, and their conflicts can be a major part of the problem. So unless they learn to get along and deal with their differences and show some forgiveness, it is useless to make other changes, such as a new menu.

By the end of the show a new venue is unveiled, a new menu or whatever is showcased, and sometimes a new staff, and new roles, are on hand, and success usually occurs. Business gets better and a disaster avoided. It all makes for entertaining viewing, but it is the spiritual parallels that strike me the most.

I do not know if any of these experts on the TV shows are Christians, but they seem to present Christian principles quite a lot as they deal with others. The truth is, tough love is often part and parcel of the Christian walk as well, both in terms of reaching the lost and in terms of dealing with other believers.

As to non-Christians, we have a message which is pretty radical. If we love the lost, we must tell them truth. And that truth involves the bad news that we are all sinners, we are all under the wrath of God, we are all headed to a lost eternity, and we all need radical surgery to make things right.

And it is very radical surgery indeed. The expert fixer-upper in this case – Jesus – deals only in tough love. He does not pussyfoot around, he does not try to give us an easy way out, and he does not wink at our predicament. He makes it crystal clear that there is only one solution to our dilemma: death to self.

We must deny ourselves, repent, and give ourselves totally over to him. Nothing less than complete surrender will do. We cannot reform ourselves. We cannot lift ourselves up by our own bootstraps. We cannot extricate ourselves from the deep pit we are in.

As C. S. Lewis put it in Mere Christianity: “Fallen man is not simply an imperfect creature who needs improvement: he is a rebel who must lay down his arms.” These are the tough truths we must share with the lost. If we love them, we want to see them rescued from their sin and dead-end trajectory. That will mean telling them the hard truths of the gospel. That is called tough love.

And it is the same with Christians dealing with other Christians. When it comes to sin in the camp, the same tough love approach is needed. When a brother is engaged in persistent, unrepented of sin, then he needs some hard biblical truths. It is because we love wayward brethren and want them to get back in right relationship with God that we must speak truth into their lives.

If we do not warn the brother living in known sin about his precarious position, we are showing a lack of love, a lack of concern. They need to be told that radical spiritual surgery is their only hope. Just mollycoddling them in their sin is obviously not at all helpful.

Pretending they can go on in known rebellion and defiance of a holy God is not loving them but hating them. We need to warn them, or their blood will be on our hands. As we read in James 5:19-20: “My brothers and sisters, if one of you should wander from the truth and someone should bring that person back, remember this: Whoever turns a sinner from the error of their way will save them from death and cover over a multitude of sins.”

Once again this is a case of tough love. It is because we love that we sometimes must be tough: no mere pleasantries, no winking at sin, no making excuses for rebellion, and no seeking to please men rather than God. In both cases – the unconverted or the sinning brother – there is far more than just a failed business at risk if radical change does not occur.

A failed life in a lost eternity is the risk. So the stakes are high. People in such places need some tough love. They do not need a restaurant restoration but a soul restoration. And that comes about by loving people enough to tell them the truth – no matter how painful that truth may be.