I had various opportunities to hear an American lay preacher and student of revival, Harry Conn last century. He often bemoaned modern evangelicalism and the watered down gospel it offered. He would discuss how our contemporary evangelistic meetings were often emotion-based, with no real solid commitment.

He would say that too many folks at these meetings ‘would sing ten choruses of “Just As I Am” and leave just as they were’. That line always got a good laugh but it contained some real truth. Simply putting up your hand or going down to the altar after an emotionally charged gospel meeting is no guarantee that a genuine conversion has taken place. 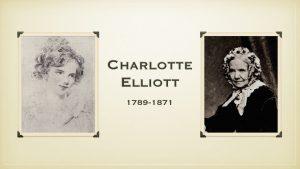 So Conn was quite right in all this. However it should be pointed out that the hymn itself which he referred to is not a call to shallow commitment or superficial discipleship. Indeed, the story behind it is quite interesting so it is worth recounting some of it here.

Just As I Am is a well-known hymn, written by Charlotte Elliott (1789-1871) in 1835. Elliott had grown up in a devout evangelical Anglican family (her grandfather was a noted evangelical preacher) in Clapham, England. Her early years were spent in somewhat more non-religious pursuits: she was a gifted artist and wrote popular humorous verse.

But in her early thirties she came down with a serious illness which left her disabled and depressed. Dr César Malan, a noted Swiss minister who had known her paid her a visit one day. When he noted her depression, he asked her if she had peace with God. Elliott was not interested and sent him on his way.

However a short time later she contacted him and apologised. She said she had need of getting some things cleaned up before she could become a Christian. But Malan told her to simply “come just as you are”. And that she did, and she became a Christian that day.

She now used her giftings and talents to serve the Lord, and she became an avid hymn writer. Some 14 years after this event with Malan she penned her famous hymn which we still sing today. Here is the hymn:

Just as I am, without one plea,
But that Thy blood was shed for me,
And that Thou bid’st me come to Thee,
O Lamb of God, I come, I come.

Just as I am, and waiting not
To rid my soul of one dark blot;
To Thee whose blood can cleanse each spot,
O Lamb of God, I come, I come!

Just as I am, though tossed about
With many a conflict, many a doubt;
Fightings within, and fears without,
O Lamb of God, I come, I come!

Just as I am, poor, wretched, blind;
Sight, riches, healing of the mind;
Yes, all I need, in Thee to find,
O Lamb of God, I come, I come!

Just as I am, Thou wilt receive,
Wilt welcome, pardon, cleanse, relieve;
Because Thy promise I believe,
O Lamb of God, I come, I come!

Just as I am, Thy love unknown
Has broken every barrier down;
Now, to be Thine, yea, Thine alone,
O Lamb of God, I come, I come!

Just as I am, of that free love
the breadth, length, depth, and height to prove,
here for a season, then above:
O Lamb of God, I come, I come.

There is no cheap grace here or easy believism, but simply solid, biblical truth. We cannot save ourselves, and there is nothing we can offer of our own to achieve our own salvation. We have nothing to bring. How can we? We are “dead in our trespasses and sins” as Paul says in Ephesians 2:1, and all our “righteousness is as filthy rags” as Isaiah wrote (64:6).

All we can do is appeal to the mercy of God as we come to him in faith and repentance. We certainly cannot demand his justice – if we did that, we would all be goners. We do not need his justice as condemned sinner, but we need his mercy and forgiveness. So there is no negotiating or bargaining with God.

Instead, all we can do is come to God just as we are. But the good news is, if we repent of our sins and cast ourselves upon him, we do not remain as we were. We are “new creatures in Christ” (2 Corinthians 5:17). We were once lost, but now we are found. Once we were dead, but now we are alive through Christ Jesus.

Although Elliott spent the last half century of her life suffering from crippling fatigue and exhaustion, she became a great ambassador for Christ. She went on to pen some 150 hymns and numerous poems, with Just As I Am probably her best-known hymn. Evangelist Billy Graham said that the Graham team used this hymn in almost every one of their crusades. He said it presented “the strongest possible Biblical basis for the call of Christ.”

After long being concerned about her spiritual condition in her earlier years, she finally found assurance when she realised she could bring nothing to God but empty hands. Christ filled those hands, and that restless heart, and she became a tremendous witness for Christ the rest of her life.

Thank God that we can come to him just as we are, and that he promises to make us into a completely new person in Christ.

One contemporary version of the hymn can be found here: www.youtube.com/watch?v=GfXnKlfHPjs