Go to any well-attended church today in the West and chances are good you will hear a constant, continuing message which is entirely positive with nothing negative. You will hear good words, nice words, pleasing words, feel-good words and soothing words.

You will likely not hear anything to make you feel uncomfortable or unhappy or cause you to squirm in your seat. None of this is all that surprising however if we have managed to turn the gospel into being all about us – instead of a holy and righteous God with whom we have to do.

Who wants to hear anything negative when we think the gospel is about me, me, me? So our gospel message becomes one exclusively about God being for us, liking us, cheering us on, supporting us, and so on. He becomes our biggest fan – our cheer squad.

Now, does God love us and want the best for us? Yes of course. But when you take some biblical truths while ignoring other biblical truths you end up with half-truths at best and false teaching or heresy at worst. That God is for us is true, but it is also true that at times God is against us. When we find this in the Bible we had better pay careful attention.

“I Am Against You.” There are many frightening words in Scripture, and this is certainly one of them. No one wants to be in a situation where God is against you. Yet that happens often, especially in regards to nations, but also to individuals. As I have been reading through the prophets again of late, I have noticed this phrase regularly appearing.

Consider how we find this phrase used in the prophetic books. Often it is used in relation to pagan nations. Here are a few such examples:

-Jeremiah 50:31 “See, I am against you, you arrogant one,” declares the Lord, the Lord Almighty, “for your day has come, the time for you to be punished.” (Speaking of Babylon)

-Jeremiah 51:25 “I am against you, you destroying mountain, you who destroy the whole earth,” declares the Lord. “I will stretch out my hand against you, roll you off the cliffs, and make you a burned-out mountain.” (Babylon)

-Ezekiel 26:3 therefore this is what the Sovereign Lord says: I am against you, Tyre, and I will bring many nations against you, like the sea casting up its waves.

-Ezekiel 28:22 and say: ‘This is what the Sovereign Lord says: “‘I am against you, Sidon, and among you I will display my glory. You will know that I am the Lord, when I inflict punishment on you and within you am proved to be holy’.”

-Ezekiel 29:3 Speak to him and say: ‘This is what the Sovereign Lord says: “‘I am against you, Pharaoh king of Egypt, you great monster lying among your streams. You say, “The Nile belongs to me; I made it for myself.”’

-Ezekiel 38:3 and say: ‘This is what the Sovereign Lord says: I am against you, Gog, chief prince of Meshek and Tubal.

-Nahum 2:13 “I am against you,” declares the Lord Almighty. “I will burn up your chariots in smoke, and the sword will devour your young lions. I will leave you no prey on the earth. The voices of your messengers will no longer be heard.” (Ninevah)

But also, and even more frightening, are the times when this phrase is used by Yahweh against his own covenant people. Consider these passages for example:

-Jeremiah 21:13 I am against you, Jerusalem, you who live above this valley on the rocky plateau, declares the Lord— you who say, “Who can come against us? Who can enter our refuge?”

-Ezekiel 21:2-3 “Son of man, set your face against Jerusalem and preach against the sanctuary. Prophesy against the land of Israel and say to her: ‘This is what the Lord says: I am against you. I will draw my sword from its sheath and cut off from you both the righteous and the wicked’.” 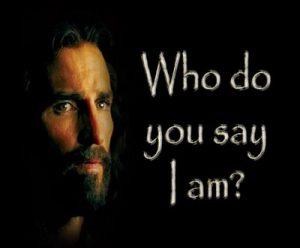 But I can hear the protests already: “Ah yes, but that is the Old Testament. God was mean and judgmental and not very loving back then, but we live in New Testament times where we have a loving and compassionate and kind Jesus. Jesus would never be against anyone.”

Um, no. One cannot read the Bible carefully and ever come away with that greatly distorted notion. God has not changed, and he is the same God in both Testaments. He was a loving and gracious God yet a holy and just God in the Old Testament, and he still is in the New.

Nothing has changed. Indeed, where did we ever get this image of Jesus as some pacifist hippy who would never harm a fly? Certainly not from the Bible! This was the Jesus who deliberately formed a whip and used it, while knocking over tables and expressing his holy anger at a sinful people who claimed to be his own.

What, Jesus angry? Um, yep. Jesus is fully God, so all the attributes of God we read about in the Old Testament we fully find in Jesus. As we read in Psalm 7:11 for example, “God is a just judge, and God is angry with the wicked every day.” This is true of Jesus in NT times as well.

-Revelation 2:4 Yet I hold this against you: You have forsaken the love you had at first. (Ephesus)

-Revelation 2:14 Nevertheless, I have a few things against you: There are some among you who hold to the teaching of Balaam, who taught Balak to entice the Israelites to sin so that they ate food sacrificed to idols and committed sexual immorality. (Pergamum)

-Revelation 2:20 Nevertheless, I have this against you: You tolerate that woman Jezebel, who calls herself a prophet. By her teaching she misleads my servants into sexual immorality and the eating of food sacrificed to idols. (Thyatira)

Hmm, Jesus has things against his people. He is not always all for them, he is not always happy clappy and cheery about his people and how they are getting on. All the churches are warned, most are rebuked and told to repent, and some are told that Christ has something against them.

This is not the happy go lucky sentimental syrupy Jesus that we hear about so often in most of our churches today. This is a Jesus who is fully holy, who is fully just, who does not and cannot tolerate sin, and who will act to preserve his glory when his people get it wrong.

He does not sit in heaven smiling a lot, winking at our sin, and pretending he does not care about our rebellion and disobedience. He takes it 100 per cent seriously, and so should we. Sure, there is wonderful grace and mercy to those who do acknowledge their sin, repent, and turn from it.

That is the greatest news we can ever hear – both for the sinner in need of salvation, and for the child of God who needs to get back into right relationship with Christ. No greater news exists than that. Our God is gracious, he is loving, he is ready to forgive. He does want to be for us.

But all this makes no sense whatsoever without first speaking about his holiness, his purity, his anger with evil, his judgement, and his willingness to act against sin. So yes, let us rejoice in a God who forgives and who shows mercy. But that is only understandable when we first speak about our condition, our sin, our rebellion, and our need of a saviour.

And also of our need of a heavenly father who disciplines and chastises his children. He would not be a loving father if he did not do this as we read about in Hebrews 12:3-11. So yes, God can and does often have things against us. Thankfully if we come to Christ the penalty for our sin has been placed on him, and we can know peace with God and reconciliation via the Son.

But let us always keep in front of us the whole Christ, not a partial Christ. Not a Christ made in our own image or to our own liking. Only the full, biblical Christ will do. And that is a Christ who is for people at times, but who is also against people at other times.