The world had one of those frozen-in time-moments 15 years ago as hijacked planes flew into the Twin Towers and elsewhere in America. The world stood still as we were all transfixed, watching our television screens as Islamic terrorists committed mayhem and carnage on such a massive scale.

With 3000 people killed and another 6000 injured, it was the deadliest terror attack on American soil. And while American and other Western leaders talked tough at the time about a war on terror, one has to ask a few hard questions: Have we in fact learned anything in the past 15 years? Are we any safer now? Are things any better? Are we more secure? Have the jihadists been effectively checked? It seems the answer to all these questions is no.

Indeed, in many respects we can make the case that things are even worse now, 15 years on from that tragic day. One way to measure all this is a very helpful website, The Religion of Peace, which has performed a very useful service in monitoring ongoing Islamic terror attacks since that fateful day.

The numbers alone are utterly shocking. Since September 11, 2001 there have been 29,197 deadly terror attacks from the political ideology that seeks to portray itself as the religion of peace. Let’s do some rough maths here: 15 years at 365 days equals a total of 5,475 days. That means there have been over 5 such attacks every single day since 9/11. 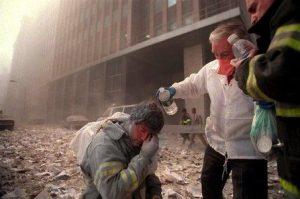 Consider just the month of August 2016. According to TROP, there were 203 attacks in 33 different countries, killing 1637 people and injuring 1734 others. Not bad for the religion of peace. I would hate to imagine what the numbers might look like if we were dealing with the religion of war.

So the attacks keep on coming. But how has the West responded? Have we learned our lessons, identified the enemy, taken active measures to protect ourselves and go after those who have sworn to kill us? Um, basically no. We have tended to do the complete opposite.

While Islamic jihad attacks have become more brazen and frequent in the West, much of our leadership, media, intellectuals and elites have done everything they can to make excuses for these attacks. They have actually defended Islam while attacking the West.

This is called dhimmitude, wherein non-Muslims bow submissively to Islam and do its bidding. These folks are the ‘useful idiots’ Lenin referred to in relation to communism. These Western dupes side with their enemies while doing all they can to destabilise the West.

As Mark Steyn put it, “Back then 9/11 was ‘the day everything changed’. With hindsight, very little changed, with the exception of Muslim immigration, which accelerated.” When a nation decides to protect and defend its enemies while tearing down itself, you know we are basically finished. And the evidence of this is all around us. It has become formulaic:

-Another Islamic jihad attack takes place.
-Westerners grovel in guilt as they make excuses for their attackers.
-We are told by the experts that this has nothing to do with Islam.
-It was just some lone wolf attacker.
-He likely had mental health problems.
-It is actually all our own fault anyway.
-Islamophobia is the root cause of all this.
-We must change and we must appease our enemies.
-More jihad attacks occur – repeat the formula.

On and on it goes. Sane and sensible leaders would take seriously a threat to our existence. They would stand up and take notice when a political ideology swears to kill us all and/or enslave us. They would do what it takes to protect Western freedoms and democracy and resist creeping sharia.

But almost none of this is happening. It is all about dhimmitude, appeasement and surrender. We obviously have so much self-loathing that we actually make excuses for our enemies as they try to wipe us out. That is a very bad place to be in my friends.

Let me offer just a small sampling of vignettes being played out in the West as we speak in relation to 9/11, 15 years on:

-A Muslim group in New York wants the phrase “Islamic terrorists” erased from the 9/11 memorial, claiming the words are hateful to Muslims and portray them in a negative light.

-Earlier this week purple-haired history professor Margot Lovett of Saddleback College in California was caught pulling down 9/11 memorial posters from around the campus.

-A bill which has been passed by both houses of Congress, the “Justice Against Sponsors of Terrorism Act”, which would give the victims’ families of the 9/11 attacks the right to sue Saudi Arabia, is likely to be vetoed by President Obama.

– The New York City Police Department has said that it will be on high alert this weekend as the terror attacks are commemorated.

-Various American NFL players will be wearing 9/11 tribute shoes this weekend, but the NFL has said they will fine the players if they do. Thankfully the police union has said that they will pay all the fines if this happens.

-In his weekly radio address Obama continued to push the line of moral equivalence and appeasement: “We cannot give in to those who would divide us. We cannot react in ways that erode the fabric of our society. It’s our diversity, our welcoming of all talent, our treating of everybody fairly no matter their race, gender, ethnicity, or faith that’s part of what makes our country great. It’s what makes us resilient.”

-Medical examiners are still working to identify remains of the World Trade Center victims, and families of 1,113 of the 2,753 who died still have no biological confirmation of death.

-Terror attacks of course continue unabated around the world, with two suicide bombings killing forty people at a shopping mall in Iraq just two days ago.

-And two days ago three woman were arrested in Paris over a terrorist plot at Notre Dame Cathedral. Their car was found with seven gas cylinders and three cans of diesel. One of the women stabbed a police officer during the arrest.

-Also overseas, the Taliban have stormed into the capital of Afghanistan’s southern Uruzgan province, resulting in government officials and U.S. trained forces fleeing the city.

Andrew C. McCarthy has just written on this same issue, and his closing words will suffice for my closing words:

Fifteen years after 9/11, al-Qaeda has revived. Its breakaway faction, the Islamic State (formerly, al-Qaeda in Iraq) is our current obsession — and there are some understandable reasons for that, since the Islamic State controls major swaths of territory in the Middle East and projects terror into the West. But al-Qaeda is resurgent and as much a threat to America as it was in the late Nineties.
After 9/11, the American people seemed resolved to defeat jihadist terror. Today, the United States government is a major financial benefactor of Iran, the world’s leading state sponsor of terrorism — a regime that regards our country as its mortal enemy. Iran has a longstanding practice of abetting al-Qaeda. The Obama administration now has a practice of supplying Iran with plane loads of untraceable cash.
A threat can be repelled only by seeing it for what it is, understanding what it wants to accomplish, and exhibiting the will to deny it, however long that takes. Erasure is not a strategy. Fifteen years ago, we seemed to know that.

8 Replies to “September 11 Fifteen Years On”