When Jesus warned his disciples that they would be dragged before local councils, magistrates, rulers and authorities (see eg., Mark 13:9; Luke 12:11-12), he made it clear that the world hates him, and the world will hate his followers. Persecution and opposition are always the mark of the true disciple.

For many decades now in the West a comfortable Christianity has cosied up to a more or less tolerant pagan culture. But things are now again heating up with many Western jurisdictions declaring war on Christ, Christians and the gospel. Increasingly we are finding radical secular rulers cracking down on Christian activities, including sharing the gospel in public. 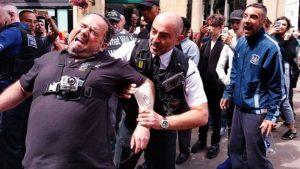 Street preaching goes way back of course – back to the first century. Jesus and the disciples went all over the place preaching and teaching. Of course that resulted in plenty of opposition, hostility and hate. But that is the way it is when biblical truth confronts secular lies.

I have written repeatedly of contemporary examples of this occurring in the West. We of course expect it in Muslim majority countries and in hellholes like North Korea. But the real worry is we now find this happening more and more in what were once free and democratic nations.

One of the most recent – and worrying – cases comes from the UK where several street preachers in Bristol were found guilty of public order offences, with fines imposed. Details of the story are found in various places, including this report from the Bristol Times: http://www.bristolpost.co.uk/live-verdicts-expected-after-bristol-street-preachers-arrested-in-front-of-cheering-crowd/story-30168142-detail/story.html

The preachers proclaimed basic biblical truths, including on homosexuality, and also entered into dialogue with Muslims and others who were present. The four-day trial resulted in guilty verdicts for two of the Christians involved. One report says this:

Two street preachers have been convicted of public order offences, after a public prosecutor claimed that quoting parts of the King James Bible in the context of modern British society “must be considered to be abusive and is a criminal matter”. The prosecutor had argued that free speech must yield to multicultural reality in modern Britain, and that there was a clear threat to violence due to the words of the preachers and the criticism of Islam.
Michael Overd and Michael Stockwell were convicted today (28 FEB) at Bristol Magistrates’ Court. On Friday (25 FEB) the court dismissed the case against a third man, Adrian Clark, ruling that there was no case to answer. The men were found guilty under Section 31 of the Crime and Disorder Act 1998, for using “threatening or abusive words or behaviour or disorderly behaviour within the hearing or sight of a person likely to be caused harassment, alarm or distress, thereby, and the offence was religiously aggravated.”

A magistrates court in Bristol has convicted two Christian preachers charged with public order offences. The case against two other men collapsed. Justices of the Peace Mr Robert Stacey (Chairman), Mr Gerry McDermot and Mrs Josephine Ramsden gave judgment on Tuesday 28th February 2017. The justices rode roughshod over principles of freedom of speech set out in a catalogue of previous cases. They imposed a fine and costs on each convicted totalling £2016.
The case arose over an outreach in Bristol city centre last July (2016). Four preachers were setting out the Gospel in front of John Wesley’s Chapel in Broadmead. Out of the four, Don Karns had charges laid and then withdrawn. Having heard the prosecution case against Adrian Clark, their worships decided he had no case to answer. That left Michael Overd and Michael Stockwell who were found guilty today.

There are plenty of problems with this trial and the outcome but perhaps the biggest shocker of all was when the government prosecutor actually said this: “To say to someone that Jesus is the only God is not a matter of truth. To the extent that they are saying that the only way to God is through Jesus, that cannot be a truth.”

Wow, now we have a (presumably) pagan legal eagle weighing in on theological and philosophical questions, pontificating on the nature of metaphysical truth! Of course two millennia ago another big cheese leader cross-examined Jesus on the same matter, asking him the question, “What is truth?”

Sadly it seems he did not stick around to hear the answer. Given that this was one of the most important questions a person could ask, and it was asked of the most important person on earth, what a missed opportunity. But this modern day Pilate has decided that he already knows the answer, and that the gospel truth claims cannot be right.

So this was really a theological trial. The gospel was on trial here, and the state decided that Christianity is false, Jesus is wrong, and Christians must not proclaim the very heart of their faith. That is mind-boggling. This was a heresy trial in other words.

Others have commented on this deplorable show trial. Andrea Williams, chief executive of the Christian Legal Centre, which is supporting the street preachers, said this:

The Bible and its teachings are the foundation of our society and provided many of the freedoms and protections that we still enjoy today. So it is extraordinary that the prosecution, speaking on behalf of the state, could say that the Bible contains abusive words which, when spoken in public, constitute a criminal offence. Today’s ruling, in effect, states that the Bible is offensive and contains illegal speech which should not be shared in public. This is a very serious state of affairs and the men will be considering next steps to challenge this decision.
‘Offence’ is a very subjective thing and is easily manipulated to shut down viewpoints that people simply don’t like. Any suggestion that there is a right not to be offended must be strongly resisted. In today’s democracy, we need the freedom to debate, challenge and disagree.
Mike Overd and Michael Stockwell were saying nothing that wouldn’t be heard at speakers’ corner in Hyde Park – presenting the claims of the Bible, answering the crowd’s questions and objections and responding calmly to abuse which was hurled at them. For a court to rule that this breaks the law is extraordinary.

This case is not unique by any means. We are seeing plenty of similar cases taking place. The words of Jesus I quoted above may seem to be for a faraway people of a faraway time. But what he warned about is happening right here and right now.

Perhaps the only good thing about this overt persecution and anti-Christian bigotry is it will help to separate the sheep from the goats. Only real-deal Christians are willing to pay the price for staying true to Christ and his Word, while fake Christians will simply slither away and hide in the background, refusing to open their mouths for Christ.

And Jesus had a few words to say about those folks as well: “If anyone is ashamed of me and my words in this adulterous and sinful generation, the Son of Man will be ashamed of them when he comes in his Father’s glory with the holy angels” (Mark 8:38).

17 Replies to “The Ongoing War on the Gospel”