Lessons from who? OK, I never heard of Hachi either until last night when I watched a few minutes of a movie on television. Hachi: A Dog’s Tale is a 2009 film starring Richard Gere. It is based on a true story of a dog whose loyalty to his master, even long after he died, has amazed so many.

I did not watch it all for at least two reasons: one, life is busy and I don’t often watch entire movies, and two, it was a real tear-jerker. I am not sure about others, but I at least got quite choked up about it for some reason. It was too painful to think about a dog so loyal to his master that he spent the next ten years after his death waiting every day for him to return at a train station.

Whether rain or snow or hail or sun, the dog was there every day, waiting patiently for his beloved master. While we can tell an adult or even a child about the death of someone, we cannot reason with a dog. So it was a heart-breaking story of a fiercely loyal dog who eventually died while waiting for his owner to get off the next train.

It is based on a real life dog Hachiko in Japan. Here is part of his story:

In 1924, Hidesaburo Ueno, a professor in the agriculture department at the University of Tokyo, took Hachiko, a golden brown Akita, as a pet. Ueno would commute daily to work, and Hachiko would leave the house to greet him at the end of each day at the nearby Shibuya Station. The pair continued the daily routine until May 1925, when Ueno did not return. The professor had suffered a cerebral hemorrhage, while he was giving a lecture, and died without ever returning to the train station in which Hachiko would wait.
Each day, for the next nine years, nine months and fifteen days, Hachiko awaited Ueno’s return, appearing precisely when the train was due at the station…
Hachiko died on March 8, 1935 at the age of 11 based on his date of birth. He was found on a street in Shibuya. In March 2011, scientists finally settled the cause of death of Hachiko: the dog had both terminal cancer and a filaria infection. 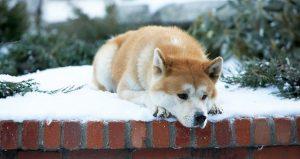 The 2009 film offers a modern American twist to the tale, but the same pathos and emotion are fully on display. I for one got quite teary about it for some reason. Indeed, call me a sentimental old fool if you like – even now as I write about this story tears are welling up in my eyes.

But there are some obvious spiritual lessons that can be gleaned from this story. Two main lessons of course can be offered here. The first is about us and our relationship to God. Are we as loyal and faithful to our Lord as this dog was to his owner?

Do we pine after God not just once in a while but on a daily basis? Do we miss God greatly when we are away from him? Does our heart break when God seems absent? Do we start going to pieces when a day goes by without communion with our heavenly master?

I would say Hachiko puts most Christians to shame when it comes to dogged determination (pun intended), fierce loyalty and daily devotion. Through thick and thin, through snow, hail, sleet and rain, this dog went to the station every day in hopes of seeing his beloved master.

The second obvious spiritual lesson to be drawn from this story may be even more important. God is even more devoted to us, his beloved. He too longs for us, yearns for us, craves to spend time with us, and desires the best for us. He so very much seeks a love relationship with us, but we so seldom feel the same way.

I would say that the Parable of the Prodigal Son is a terrific illustration of all this. We know the father saw his prodigal son from a distance, and then ran to meet him. But how long did the heartbroken father have to wait for that day? How many days, weeks, months or perhaps even years did he have to wait?

Every day he would have looked down the road, hoping and praying for his long-lost son to return. Every day his heart would be broken as he waited patiently for any sign of his wayward son. Thankfully in his case the son did finally return.

As we find in Luke 15:20: “But while he was still a long way off, his father saw him and was filled with compassion for him; he ran to his son, threw his arms around him and kissed him.” What a day of rejoicing that must have been. And so it is when any prodigal comes back to God.

But for poor Hachiko that day never came. He died waiting in vain for his beloved owner to return. That God’s heart breaks for the lost is found throughout Scripture. The prodigal son story is just one example of this. The story of Jesus weeping over Jerusalem is another.

But as he came closer to Jerusalem and saw the city ahead, he began to weep. “How I wish today that you of all people would understand the way to peace. But now it is too late, and peace is hidden from your eyes. Before long your enemies will build ramparts against your walls and encircle you and close in on you from every side. They will crush you into the ground, and your children with you. Your enemies will not leave a single stone in place, because you did not recognize it when God visited you.”

And again in Luke 13:34: “Jerusalem, Jerusalem, you who kill the prophets and stone those sent to you, how often I have longed to gather your children together, as a hen gathers her chicks under her wings, and you were not willing.”

So three groups of people can take heart from the story of Hachiko. Those who are not yet reconciled to God through Christ still have time to do so. God waits with open arms as did the father waiting for his lost son. The same with those who were believers but have drifted away. You too can return and find the father’s embrace.

And those who are believers must rekindle their love for God. They need to ask themselves just how much they love their Lord, how loyal they are to him, how much they pine for him every day. Let the life of one faithful and committed dog teach us some very important spiritual lessons here.

5 Replies to “Lessons from Hachi”