Indulge me please with this little thought experiment. If Christians wanted to take over the Middle East and turn all Muslim nations there and elsewhere into Christian nations, how might they go about it? What could they do to radically transform the Muslim world and turn it into a Christian one?

It seems to me that there are at least two main ways they could go about all this. The first way is in fact the normal Christian way, one that has been practiced for centuries: pray for Muslims, befriend them, evangelise them, and lead them to Jesus Christ. But consider another option. 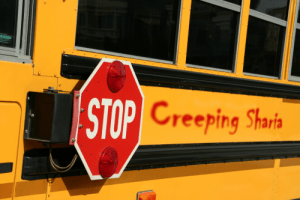 A second way they might go about doing this – although it ain’t gonna happen in Muslim-majority countries – is to flood these countries with countless Christians; fill their lands with Christian migrants; and appeal to the good will of these nations to take all these people in and grant them full citizenship rights – with no questions asked.

Once in, the Christians could get to work. They could set up churches on every block; they would demand the right to evangelise everywhere; they would insist on sharing in religious services at mosques, including praying and giving messages there.

They would insist that Muslims worship the same God as Christians do; they would demand interfaith services and full ecumenical cooperation; they would seek to convince their Muslim hosts that Christianity is an Abrahamic faith just like Islam; and they would seek to play down any differences between the two faiths.

They would demand that anything that they find offensive be removed or censored. Thus they will ask that crescents be taken down; women be allowed to go around in public without burkas; noisy prayer times in public be silenced; and alcohol be allowed to be consumed anywhere, along with nice pork dinners.

And of course these Muslim nations would fully comply with all these demands. After all, they want to be seen as tolerant and compassionate and into diversity and pluralism. They do not want to be regarded as racist, so they will bend over backwards to fully accommodate the new Christian arrivals.

They would have plenty of “Christianity appreciation” days. They would open the doors of their mosques and let all Christians – including Christian women – come in and do as they please. They would not even have to remove their shoes or kneel on a prayer mat.

Of course Islamic laws would have to be replaced with Christian laws. If that is a bit too much at first, then at least the Christians would start setting up parallel legal systems, including family law, financial law, and so on. And the Muslim nations would happily go along with all this.

In addition, Muslims would be forced to finance Christian activities overseas. For example, there would be a tax imposed on most foods and the fees collected by the accreditation bodies would be used to finance overseas Christian mission work, the building of churches, and the teaching of Christianity.

They would flagellate themselves with guilt for how unloving and uncharitable they have been to their Christian neighbours. They would voluntarily denigrate their own faith while elevating and honouring the Christian faith. They would do all they can to make Christianity the supreme religion of the land, while working overtime to dismantle Islam.

If any Muslim objected to all this, the leaders and elites of the land, along with those in the academy and media, would strongly denounce these people as not being true Muslims, as being extremists, and as being a blight on the faith. They would berate them and say, “This is not what we do here. That is not how we operate. This is not who we are.”

Indeed, any Muslim who digs his heels in on this would be condemned as Christianophobic. Seminars, media events and public rallies would regularly be held to stamp out this ugly Christianityophobia, and force all recalcitrants to repent of their unloving attitudes toward their Christian brethren.

After running with all this for a number of years, the results will be finally realised. All these Muslim nations will have become Christian nations. Muslims will now be in the minority, and they will have few hard choices: either convert to Christianity, be killed, or live as a second class citizen.

And of course on an international scale all this would be celebrated and promoted. The former Muslim nations which are now mainly Christian will be given plumb positions at the UN and other globalist bodies. They would be given preferential treatment, while all remaining Muslim nations would be excluded or marginalised.

This, my friends, is how Muslim nations could be taken over from within and transformed into Christian nations. This is an ingenious plan for the total transfiguration of Islamic lands. Now, if all this sounds vaguely familiar, there just might be a reason for this.

No, there are no Christian moves like this afoot anywhere in the Muslim world. But unless you have been asleep for the past half century, this is becoming the standard MO for Muslims as they work on subverting Christian nations from within by means of creeping sharia and stealth jihad.

Everything mentioned above is of course now happening in the West – except it is Muslims doing it in Christian countries. And they have been very successful thus far. That is why I and others keep warning about sharia creep and the slow transformation of the West.

Well, I do, and I will keep resisting it with all my might. I suggest you do the same, before we lose it all.