In yet another terror attack in the West, a bomb has exploded at a pop concert in Manchester, with 19 confirmed dead and 59 injured so far. The blast went off at an Ariana Grande concert, and police are saying it clearly seems to be a terrorist attack.

The American pop singer had been performing her final song for the night when the blast went off. Around 21,000 fans were there, mostly children and teenage girls, along with some parents. The suicide bomber detonated his device just outside the arena, and it seems to have been a nail bomb.

Here are some accounts of the carnage and chaos: 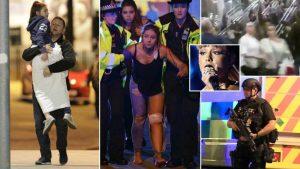 Six hospitals in the greater Manchester area are treating the many injured and the entire area has been cordoned off. Already world leaders are offering their condolences. The singer was not injured in the attack, but she may cancel or postpone the rest of her tour.

Electioneering in the UK will likely be put off for at least a day or two as well. This is yet again a case of a nation in mourning over more innocent men, women and children being slaughtered in our cities. And in this case it seems to have been overwhelmingly female children and female teens.

While officials are now quite open about calling this a terrorist attack, thus far there is no further word about who or which group is responsible. While no one has yet claimed responsibility, there is little doubt as to which ideology is behind this.

Indeed, security and terrorism experts are already saying this has all the hallmarks of an ISIS terror attack. And they also tell us that normally in a case of a suicide bombing, other people were involved in the making of the bomb. So time will tell.

But I have no problem saying already that this is likely Islam at work once again. If I am proved wrong in the hours and days to come, then I got it wrong. But I really have very little doubt as to what this is: yet another Islamic jihad attack designed to produce maximum death, damage and destruction.

Shoulda been done long ago. But we will continue to have apologists for evil making excuses for this. We will hear yet again about mental illness, lone wolves, and a perversion of a great religion, etc. I for one have had a gutful of all this dhimmitude and delusion.

The West is in many respects responsible for all these attacks and all these deaths by refusing to be honest about the nature of the enemy we face. By refusing to get real about those who have sworn to kill us and enslave us, our leaders also have blood on their hands.

Indeed, it is not just faraway Manchester that is experiencing this. Australia has had its fair share of Islamic terror, and just moments ago we had this headline posted: “SA Police and Australian Federal Police arrest SA woman and charge her with terrorism offence”.

The article opens: “A South Australian woman has been charged with a terrorism offence. Details are scarce but SA Police and the Australian Federal Police will hold a press conference at 2pm today.” That press conference has now just been held, and the 22-year-old woman of Somali origin had pledged her allegiance to Islamic State. Hmm, I really didn’t think that she would turn out to be a Quaker or a Buddhist.

To understand just what we are up against here, all we need to do is look at some hard numbers. These are utterly shocking numbers, and they need to be shared far and wide. Since 9/11 there have been 30,862 deadly Islamic terror attacks. Let those numbers sink in.

This is a case of devout Muslims carefully following the teachings and example of their beloved prophet Muhammad. And there seems to be no sign of this stopping any time soon, and that is mainly because most Western leaders, media elites and “experts” refuse to mention the “I” word or the “M” word.

As long as they refuse to admit that we have an enemy which has declared its intention to destroy us, we will just see more of these terror attacks, and more dead children, and more blood on our streets.