It seems every time another Islamic jihad attack takes place in the West, the broken record of dhimmi responses is played – over and over again. You know how it goes: 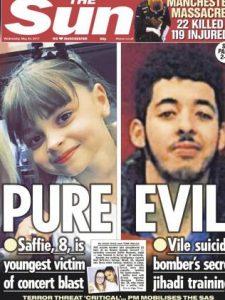 On and on it goes. Our Western leaders, elites, mainstream media, and commentariat refuse to call Islam out for what it is: a blood-soaked political ideology which has been involved in murder and mayhem for 1400 years now. The West is committing suicide by refusing to acknowledge that there are actual enemies out there who have sworn to destroy us.

As long as we ignore reality we will be victims of it. We will keep seeing more blood on the streets of Western cities, and we will see more slaughtered men, women and children. The attack in Manchester is yet another case in point. Simply listening to the MSM about this horrific massacre shows how out of touch and how deep into dhimmitude they are.

They kept talking about lone wolves, about trying to figure out why anyone would do something like this, etc. Now we know what any sensible person suspected all along: yep, another Muslim acting out his faith, just like their prophet Muhammad did.

And we are learning that he was everything most of us expected he would be: he was a “devout” Muslim who even attended a “moderate” mosque! Consider what we now know about the jihadist suicide bomber: Salman Abedi. As one news report states:

Abedi was born in 1994, in Manchester, the son of Libyan parents who had fled the Gaddafi regime and, like many refugees fleeing to the UK, ended up being placed in the city….
Salman was said to have attended Didsbury Mosque, where Ismail volunteered and his father, Ramadan Abedi, used to perform the call to prayer. The mosque, also known as the Manchester Islamic Centre, is described by trustee Fawaz Haffar as “moderate and modern”.
Mr Haffar said he remembered seeing Abedi’s father praying. He said: “I see him praying but I don’t know really who he is. I see him sometimes raising the azan, or call to prayer, but that was a long time ago. As far as I knew he went back to Libya when things were much better over there, to work over there. That’s all I know about him. He was devout as far as I know.”

Yep, here we have a devout Muslim, and one who went to a moderate mosque. Nothing to fear here! Another news item says this:

The 22-year-old attacker, an abrasive, tall, skinny young man who was often seen in traditional Islamic clothing according to neighbours, was heard ‘chanting prayers loudly in the street’ outside his home in the south of the city.
Abedi is the third of four children by Libyan refugees who came to the UK to escape the Gaddafi regime. They are believed to have lived in the Fallowfield area of south Manchester for at least ten years.

And how is it that these guys are always “lone wolves” when plenty of arrests of others are made immediately after such incidents? For example, a 23-year-old man was arrested soon after the concert bombing, and police raided numerous properties in the greater Manchester area soon thereafter.

And of course we have long known what a hotbed of radicalism this area is. So there should be no surprises here. As one report mentions:

Manchester has long been a hotbed of Islamic extremism, with dozens or more Muslim-born radicals and converts known to have gone to fight for Islamic State and, security officials fear, in some cases secretly returned to continue their jihad in Britain.
Children as young as 11 in the greater Manchester region have been reported at risk of radicalisation, with 350 under-18s flagged by authorities since 2007.
A Manchester-born and bred jihadi who blew himself up for Islamic State in a suicide attack during the battle for the Iraqi city of Mosul in February, Jamal al-Harith, grew up as Ronald Fiddler in what was described as a “normal Jamaican family” before converting to Islam.
He spent two years imprisoned in Guantanamo Bay after being captured by US special forces in Afghanistan in 2002 on suspicion of association with the Taliban. Harith came from a pocket of Manchester called Moss Side, long known for gang hooliganism which has morphed into Islamic radicalisation.
An investigation by Britain’s The Guardian revealed that 16 convicted or dead terrorists have lived within 4km of al-Harith’s home address. The Guardian reported they were part of a radical network and some of them prayed at the same mosque.

We are still learning more about this latest jihadi outrage, but nothing that we have learned so far should be at all surprising. This is Islam at work. This is how this political ideology operates. Yet the West is filled with clueless wonders – or worse – who refuse to face reality, who refuse to name our enemy.

And of course our brainless celebrities and Hollyweirdians – widely known as experts on foreign affairs and international relations – also insist on chipping in, sharing their wit and wisdom. As but one example, pop star Katy Perry offered us some real gems on how to proceed here.

She said in an interview, “I think that the greatest thing we can do is just unite and love on each other. No barriers, no borders, we all just need to co-exist.” Um yep, that should do the trick. Thanks for that Katy. Let’s just love on them – that will solve all our problems.

Why didn’t we think of that when the Nazis were killing millions and enslaving the world? Let’s just coexist! Love ‘em a lot! Brilliant. If only those recalcitrant Jews had thought like Katy, everything would just have been peaches and cream back then.

This is the world we live in: clueless clowns – be they politicians, commentators or celebs – who are bringing about our destruction by being utterly in the dark as to the war we are in. Good grief. No wonder we keep losing over and over again. No wonder Islam keeps moving forward all over the globe.

Thankfully not everyone is a blubbering idiot when it comes to such serious matters. Brendan O’Neill has just written about the need for some hard-headed realism here. And part of that is a bit of righteous indignation, instead of all the useless “platitudes. And the hashtags. And the candlelit vigils.” He writes in part:

The post-terror cultivation of passivity speaks to a profound crisis of – and fear of – the active citizen. It diminishes us as citizens to reduce us to hashtaggers and candle-holders in the wake of serious, disorientating acts of violence against our society. It decommissions the hard thinking and deep feeling citizens ought to pursue after terror attacks. Indeed, in some ways this official post-terror narrative is the unwitting cousin of the terror attack itself. Where terrorism pursues a war of attrition against our social fabric, seeking to rip away bit by bit our confidence and openness and sense of ourselves as free citizens, officialdom and the media diminish our individuality and our social role, through instructing us on what we may feel and think and say about national atrocities and discouraging us from taking responsibility for confronting these atrocities and the ideological and violent rot behind them. The terrorist seeks to weaken our resolve, the powers-that-be want to sedate our emotions, retire our anger, reduce us to wet-eyed performers in their post-terror play. It’s a dual assault on the individual and society.

Stop and think about how strange it is, how perverse it is, that more than 20 of our citizens have been butchered and we are basically saying: ‘Everyone calm down. Love is the answer.’ Where’s the rage? If the massacre of children and their parents on a fun night out doesn’t make you feel rage, nothing will. The terrorist has defeated you. You are dead already.