With it being just a few days past the 500th anniversary of Luther’s posting of the 95 theses, it is worth looking at a particular aspect of Luther’s theology. Just six months after his famous theses were posted, he took part in a disputation (discussion) at Heidelberg.

At this meeting on April 25, 1518, Luther offered 28 theses (these theological theses were followed by 12 more philosophical ones). It is here that his famous “theology of the cross” was formulated. The 28 theses can be viewed here: bookofconcord.org/heidelberg.php 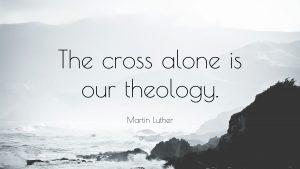 While I will spend a bit of time looking at them, it is one aspect of this that I especially want to dwell on: Luther’s understanding of divine love, as opposed to human love. But let me quickly touch on his theologia crucis. He distinguished the theology of the cross from the theology of glory.

The latter had to do with the human attempt to comprehend God and get right with God, while that former had to do with admitting to our complete inability to know and please God with our own fleshly efforts. It is at the cross that the true revelation of God is found, and there every bit of human pride is shattered.

We either come to God on his terms – via a crucified saviour – or we attempt to come to him in our fallen and spiritually dead condition. Only one avenue works. Luther delighted in the cross of Christ and all that it symbolised: humility, suffering and death.

Because that is the only way to get right with God. It does away with all pretences of human greatness, wisdom and ability. It equalises us all as lost sinners who can only look to Christ on the cross for any hope. There can be only these two alternatives when it comes to salvation and right standing with God.

Luther rejected the theological position current at the time which he saw as those who glory in themselves, their own efforts, their own human reason, and their own achievements, even if combined with God’s grace. He offered instead a position that brings glory to God alone, showing fallen mankind their utter hopelessness apart from Christ and the cross.

As Eric Metaxas writes in his brand new biography of Luther (Viking, 2017), “At some point, we come to an end and are stuck. It is at this point that we must stand and wait for God’s revelation to come to us. God must condescend to speak to us. If he does not, we have no hope. We are alone at the end of all human capability and logic, looking up.”

Or as Mark Mattes summarises in the just released Dictionary of Luther and the Lutheran Tradition (Timothy Wengert, ed., Baker, 2017):

The theology of the cross is God’s program to unbelieving sinners who ultimately must despair of themselves (thesis 18). To remake such sinners into people of faith, God destroys one’s most treasured defenses and the convictions that sustain human self-righteousness before God. Hence, God reveals himself, but only paradoxically, as concealed in the cross: God’s wisdom is granted in foolishness, his power in weakness, his glory in lowliness, and his life in the death of his Son (cf. 1 Cor. 1:18-25).

This became the heart of Luther’s theology, and much of the Protestant Reformation. And it is this position which he begins to enunciate and expand upon in these 28 theses. While all 28 theses are important contributions to the development of medieval theology, it is his final one that I wish to focus on.

Thesis 28 says this: “The love of God does not find, but creates, that which is pleasing to it. The love of man comes into being through that which is pleasing to it.” This short but powerful statement deserves careful attention. It especially nicely counters the mushy and unbiblical emphasis found in so many churches today that God absolutely is thrilled to bits with us just as we are, and that is why he acts on our behalf.

The opposite is in fact the case. We are not at all lovely. We are instead sinners fully deserving the wrath of God. But in his grace he reaches into our hopeless situation, and offers salvation to those who cannot save themselves. This is the real love of God.

Sinners are lovely because they are loved; they are not loved because they are lovely. That is why the love of man avoids sinners and evil persons. But Christ says: I came not to call the righteous, but sinners (Matt. 9:13). And this is the love of the cross, born of the cross, which betakes itself, not where it may find something good to enjoy but where it may confer good upon the poor and the needy; for it is more blessed to give than to receive, says the apostle (Acts 20: 35).

A very helpful summary of Luther’s thoughts – albeit a brief one – is found in Carl Trueman’s 2015 book, Luther on the Christian Life (Crossway). The following is found on pages 66-67:

Luther’s radical redefinition of theological vocabulary demanded by the cross involves nothing short of a virtual inversion of meaning. This is most evident in the last of the theological theses. In fact, while the distinction between the two kinds of theologians has tended to grip the imagination of subsequent generations, the greatest thesis, the capstone of the whole Heidelberg theology, is arguably thesis 28: “The love of God does not find, but creates, that which is pleasing to it. The love of man comes into being through that which is pleasing to it.” Immediately prior to this, theses 25 and 26 adumbrate Luther’s mature understanding of justification by faith: the doing of the law is seen as woefully inadequate as a means of being right with God and is contrasted with simply resting on God’s Word by faith. This is followed by thesis 27, which states that Christ’s work is an active work, and our work in salvation should therefore be regarded as a passive, accomplished work. This then provides the platform for the thesis on God’s love.
Here the glory-cross antithesis undergirds the distinction between human and divine love. Human love, Luther claims, is reactive: it responds to something intrinsically attractive in an object, which consequently draws it out. In other words, human love is attracted to what it first finds lovely. When a husband recalls the moment he fell in love with his wife, he remembers that he saw something intrinsically attractive within her—perhaps her physical beauty or her charming personality—and his heart was moved to love her. There was something in the object of his love that existed prior to his love and drew him toward her. This is the basic dynamic of human love; but we must remember that the revelation of God on the cross inverts such human logic.
Thus, divine love, by contrast, is not reactive but creative: God does not find that which is lovely and then move out in love toward it; something is made lovely by the fact that God first sets his love upon it. He does not look at sinful human beings and see among the mass of people some who are intrinsically more righteous or holy than others and thus find himself attracted to them. Rather, the lesson of the cross is that God chooses that which is unlovely and repulsive, unrighteous and with no redeeming quality, and lavishes his saving love in Christ upon it.
It is arguable that Luther never wrote a more profound or beautiful sentence than the first part of thesis 28. A moment of reflection indicates that it contains in embryonic form much of his mature Reformation theology. For example, given his position (already stated in earlier theses) on the impotence of the human will, it is theologically necessary that God take the sovereign, unilateral initiative in salvation. This thesis defines the content of the love of God in precisely such anti-Pelagian terms. Theologians often express God’s sovereignty and predestination in somewhat abstract terms. Here, Luther articulates a doctrine of God’s love that provides a framework for both with accents on the personal.

Simply meditating on this divine love will do each believer a world of good. God loves the unlovely. God reaches out to us when we all held our fists to his face in wilful, defiant rebellion. He did not love us because we were first so very lovely. We were not.

But when we receive that love, turn from our sins, and renew a relationship with him, he actually begins to make us lovely. We are transformed by his love. What an incredible transaction. What an amazing God we serve. One need not agree with everything Luther wrote, or everything that the Reformation was all about to appreciate these glorious truths.

This meditation on divine love is one that we will all greatly benefit from as we think about it, meditate on it, wonder about it, and worship God as a result. As Charles Wesley put it in the first verse of his hymn “And can it be that I should gain”:

Or as the Apostle Paul put it in Romans 5:6-8: “You see, at just the right time, when we were still powerless, Christ died for the ungodly. Very rarely will anyone die for a righteous person, though for a good person someone might possibly dare to die. But God demonstrates his own love for us in this: While we were still sinners, Christ died for us.”

Gerhard Forde, On Being a Theologian of the Cross. Eerdmans, 1997.
Alister McGrath, Luther’s Theology of the Cross. Blackwell, 1985.

6 Replies to “Luther, the Cross, and Divine Love”