Place: London
Date: October 30, 1817
Occasion: Interview with the London Times
Subject: Should the church take a stand on slavery?

Here is how the newspaper began with this story:

“Hill Christian Church is seen as this hip, progressive church that’s drawn huge crowds, but it’s still evangelical,” co-author Sara Haines stated to Pastor Carl during the Oct. 30 interview. “So, where do you stand on social issues that young people are particularly passionate about, like slavery? Like, how do you address those types of things?”
“I think our job is still to help people—not necessarily change how they think—but try to point them to what God has said, what we believe the Bible [has] to say,” Pastor Carl replied. “We believe that God is good, that God loves everybody, that Jesus was here to set people free, and that’s still the good news of the gospel.”
He said that he tries to allow everyone who would like to hear the message to come to Hill Christian Church because sometimes evangelicals and others shut out those who disagree on the issues.
Bringing Carl back around to the question, co-author Joy Bahar then asked, “So, it’s not a sin in your church to have slaves?”
“Um, that’s the kind of conversation we would have—finding out your story, where you’re from, what you believe,” Carl replied.
“Work through it,” Haines interjected. “Like, talk about things.”
“Yeah, I mean, God’s the judge,” Carl answered. “People have to live with their own convictions, and I think if I have to tell you…”
His response drew applause from the listening audience.
“That’s such a broad question to me. I’m going higher,” Carl said. “I want to sit with somebody and say, ‘What do you believe?’”
“So, it’s not an open-and-shut case with you,” Bahar observed.
“Some people would say it is,” Carl replied. “I think, to me, I’m trying to teach people who Jesus is first [and] find out their story. Before I start picking and choosing what is sin in your life, I’d like to know your name.” 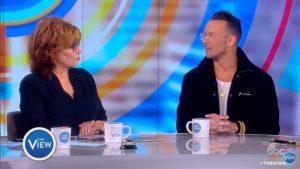 The above story is fictional. But if you change just a few words, you have a perfectly true story that just took place. Simply replace these words:
‘Hill Christian Church’ with ‘Hillsong New York’
‘Pastor Carl’ with ‘Carl Lentz’
‘Slavery’ with ‘abortion’
‘The London Times’ with ‘ABC’s “The View”’

With those few changes you have an actual interview that has now been published far and wide. You can read all about it here: christiannews.net/2017/11/02/god-is-the-judge-hillsongs-carl-lentz-tells-the-view-when-asked-whether-or-not-abortion-is-sin/

If Christians today would be a bit bothered and upset that an evangelical pastor 200 years ago was so utterly weak and wishy-washy on the issue of slavery, how much more today on the issue of abortion? With vitally important social issues, should not Christian leaders be speaking out clearly and unashamedly?

The parallels between the two times and the two issues are very close indeed. Sure, back then there were folks who called themselves Christians who either were weak as water on the issue of slavery, or worse yet, supported the slave trade. Christian champions like abolitionist William Wilberforce would be appalled of course.

In the same way, today there are Christian leaders who refuse to give an unambiguous signal on the issue of abortion, or far worse, will seek to justify and condone it somehow. And in my books, what we had Carl Lentz doing was pretty much a blatant example of the former: refusing to speak clearly and solidly on this issue, but just equivocate and try to keep everyone happy.

Now before Hillsong groupies want to burn me at the stake, let me say that I have done many hundreds of interviews over the years with the secular media. I know full well how hard it can be, and I know that you have to walk carefully in such interviews.

And I would have done plenty on the hardcore issues like abortion and homosexuality. And that is exactly what co-host Sara Haines asked Lentz about: “So, where do you stand on social issues that young people are particularly passionate about, like gay marriage [and] abortion? Like, how do you address those types of things?”

I fully get trying to be wise, diplomatic, and cautious in such interviews. As I said, I have done heaps of these over the years. But fudging on the issue, seeking to evade a direct question, or trying to water down important social issues like this is NOT how a Christian leader should proceed.

I would not have done that, neither would so many other Christian leaders, be they a Franklin Graham, an Al Mohler or a Ben Carson. An opportunity like this is not to be missed, and a thoroughly biblical Christian would have spoken clearly and decisively on such issues, and not evade the question or try to talk around it.

Yes, pastors need to know their own flock and hear their stories and extend open arms where possible. But that is never something to be done without also clearly affirming basic Christian teachings on the hot potato social and ethical issues of the day. A Christian church should be known for what it believes and what it affirms.

Such matters should be clearly stated from the pulpit, so that when a non-Christian comes in, or a new Christian, they can sense that church people are there to reach out to them, but that the church also has certain standards and values that are non-negotiable.

Thus if you have been going to a church for 4-5 years, and have no clue as to where they stand on things like abortion or homosexuality, then that church has not been doing its job. It has NOT been proclaiming biblical truth, but has simply sought to please men and not rock the boat.

This is not what the church of Jesus Christ should look like. The church should be known as a place where sinners are loved and cared for, but also where truth is unflinchingly proclaimed – both doctrinal and moral truth. And when a Christian leader has a perfect opportunity to share such truth on national television, it is appalling when they do not do so.

Again, I am not just picking on Hillsong here. Plenty of other megachurches are doing exactly the same thing. Many are refusing to speak out on the vital issues of the day, and many Christian leaders seem far more interested in keeping people happy than in proclaiming the whole counsel of God.

Lentz himself has been guilty of this before. See these pieces for example where we find Lentz being a serial offender in this regard:

Whether it is cosying up to New Age guru Oprah Winfrey or refusing to offer a biblical stance on the issue of homosexuality, this has been happening far too often I am afraid. And as I said, he is not alone in this. But since he and Hillsong are so extremely influential and so very public, we have an obligation to call this out when we find it occurring.

I realise that for doing this many Christians will hate on me and want nothing to do with me. Well, what can I say? Sadly, some believers are far more concerned to defend to the death a particular church or leader than they are Christ and Scripture.

Sorry, but I must always side with the latter. Human leaders will get it wrong at times. They will easily be swayed by the crowds, and the pressure will always be on to water things down, to never rock the boat, and to keep people pouring into their churches.

Thus we must pray for Lentz and other such leaders. Those in the megachurches can especially be prone to these sorts of temptations, so they need a lot of prayer support to stand strong and affirm all of God’s truth, especially when given a chance to do so on a silver platter, as Lentz just was.

We must always stand with God and his truth, and never let the fear of man or the desire to please men become our main mode of operation. Indeed, just compare Lentz with an Elijah, or a Jeremiah, or even Jesus. Did Elijah have a “conversation” with the Baalists, or Jeremiah with the idolaters, or Jesus with the Pharisees?

Why do I suspect that if roles were reversed, John the Baptist for example would never have chewed out Herod for his sexual sin, but would instead have sought to have a friendly “conversation”? Why do I suspect many church leaders today would find their confrontational and direct style to be unloving and even un-Christlike?

Let me conclude with some wise words on this issue. A. W. Tozer once put it in this way:

The desire to please may be commendable enough under certain circumstances, but when pleasing men means displeasing God it is an unqualified evil and should have no place in the Christian’s heart. To be right with God has often meant to be in trouble with men.

Or as Spurgeon rightly said:

You and I cannot be useful if we want to be sweet as honey in the mouths of men. God will never bless us if we wish to please men, that they may think well of us. Are you willing to tell them what will break your own heart in the telling and break theirs in the hearing? If not, you are not fit to serve the Lord. You must be willing to go and speak for God, though you will be rejected.

And Martyn Lloyd-Jones speaks to the extreme version of this, but his words must be taken seriously:

That is the only way to understand rightly this picture of the false prophets. The false prophet is a man who has no `strait gate’ or `narrow way’ in his gospel. He has nothing which is offensive to the natural man; he pleases all. He is in ‘sheep’s clothing’, so attractive, so pleasant, so nice to look at. He has such a nice and comfortable and comforting message. He pleases everybody and everybody speaks well of him. He is never persecuted for his preaching, he is never criticized severely.

The actual interview is found here (from 20- to 30-minute mark roughly): www.youtube.com/watch?v=zOaJR2pA2M8