Often great achievements in history are accomplished by individuals, not by groups. Sometimes the solitary figure does more to turn the course of history than an entire nation. Examples of this are many. In the early centuries of the Christian church one man stood strong for biblical orthodoxy while so many turned away.

The fourth century bishop of Alexandria and church father Athanasius often stood alone against the Arian heresy, and he paid a heavy price for it, being exiled five times from his homeland. But in the end orthodoxy prevailed, and we now refer to him as Athanasius Contra Mundum (Athanasius Against the World). 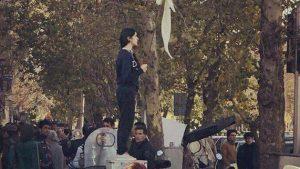 Much more recent examples come to mind, such as the brave man who stood in front of a column of tanks in Tiananmen Square in Beijing, defying the Communist authorities in the 1989 protests. Another individual is now making the news, in another act of protest against an oppressive government.

An unnamed woman has defied the hard-line Islamic authorities in Iran, removed her head covering, and waved it as an act of protest. For a week now protests have taken place around the country, and this woman with her courage and daring has again caught the attention of the watching world.

Now being referred to as the ‘Hijabless Woman,’ she has stood alone and resolute, a symbol of resistance to an authoritarian regime which has been so oppressive of human rights and women’s rights. These brave protestors have challenged the powers that be, voicing their anger at the Islamic Republic of Iran and its supreme leader, Ayatollah Ali Khamenei.

But the crackdown is now coming, and Iran’s elite Revolutionary Guards have been deployed to squash eruptions of anti-government protests throughout the land. Already some 22 have died, and some 500 people have been arrested. How this all turns out remains to be seen.

But the photos and the videos of this brave, nameless woman standing on a concrete box in a crowded Tehran city street waving her head covering on a pole are an inspiration to millions, not only in Iran, but around the world. Whether she has been arrested or not by now is unclear.

The irony of all this is the silence – yet again – of Western feminists. They should be at the forefront of supporting this woman and supporting her cause. Yet we once again have silence. Worse yet, we have utterly clueless Western women wearing the hijab in “solidarity” with their Muslim sisters.

How bizarre. As one female columnist put it in today’s Australian:

The rapid spread of the protests, which began with economic concerns and spread to other causes, suggests that while some women in the West promote and celebrate a woman’s right to wear the hijab, many Iranian women can’t wait to get rid of the head-covering, and other trappings of sharia.
US ambassador to the UN Nikki Haley yesterday praised the courage of the Iranian protesters, saying: “This is the precise picture of a long oppressed peoples rising up against their dictators.” US President Donald Trump, who has tweeted support for the protesters daily, wrote: “The people of Iran are finally acting against the brutal and corrupt Iranian regime.”

I have written before about how liberalism and feminism have actually betrayed women as they promote all things Islamic, no matter how misogynist and oppressive Islam is. See for example this piece; billmuehlenberg.com/2013/05/30/islam-who-will-stand-up-for-women/

In that article I cited one brave Pakistani woman who is standing up for women, and denouncing Western liberals for failing to do so. As I said in the piece:

Sabatina James is one brave warrior. She knows she is taking her life in her hands here. She is really up against it: not just against all the anti-women sentiments and ideology in Muslim nations, but the “useful idiots” in the West who incredibly side with Islam and against the needs and aspirations of women seeking freedom and equal rights. Go figure.

I could finish my article here, leaving these brave individuals for your consideration and prayers. But there is one more aspect to the Iranian upheaval that most of the media is not covering. While these protests of course have to do with political and economic realities in Iran, there is more going on here than just these aspects.

There is also a spiritual revolution taking place in Iran right now, and this is the most significant part of all this. As I have often written about, the number of Muslims coming to Christ in the past century is quite amazing – more than in the previous 1300 years.

A brand-new column by Michael Brown states some of these important truths and is well worth quoting from. He deals with the shoddy Western reporting on this, and then states:

But there’s something else going on in Iran that could well be playing an important role in the rising Iranian discontent. It’s something that has been building and growing under the surface and behind closed doors. And it remains one of the best kept secrets in the world, despite occasional media reports in the last few years: Iranian Muslims are converting to Christianity at an unprecedented pace.
I’ve heard this firsthand from Iranian converts. I’ve heard it firsthand from Christian leaders who have worked with these converts inside and outside of Iran. And I’ve heard it from missiologists whose job it is to track such things.

When it comes to Iran, already in 2006, Reza Safa could write a book titled The Coming Fall of Islam in Iran: Thousands of Muslims Find Christ in the Midst of Persecution. The website of Safa, himself a former Iranian, Shiite Muslim but now an evangelical pastor, declares, “Despite severe persecution by the Iranian government against underground churches, God’s Word is spreading like a wildfire all over Iran. Pastor Safa believes that Iran will be the first Islamic nation to convert to Christianity.”

Something powerful is happening in Iran, despite the intense persecution Christians are facing. My sources have been telling me that: 1) it’s only a matter of time before the number of these conversions reaches a critical mass, allowing these new Christians to emerge from the underground into the public eye; and 2) it is the Iranian regime that is our enemy, not the Iranian people, many of whom love America and hate what the radical Islamic leadership has done to their country.
We should pray for these courageous Christians, and, more broadly, stand with these Iranian protesters. It could well be that there are many secret converts among them. And we should applaud our government for letting Iran know that we are watching them carefully right now. It could be time for this great, hidden story to be known to the whole world.

Absolutely. Keep praying. And keep alerting others to the amazing things solitary individuals can do to change the course of history. God often works through individuals to achieve his purposes, and courageous women like this may well be his chosen vessels for such a time as this.

You can see a short video of the brave female protestor in Iran here: edition.cnn.com/videos/world/2017/12/31/woman-waves-white-shawl-iran-protests-newday.cnn

3 Replies to “Faith, Freedom and the Power of One”