We have so watered down biblical truth that this may surprise many folks – even many Christians. But the New Testament is full of this sort of radical language. We must die in order that we might live. As Jesus put it in John 12:24, “Truly, truly, I say to you, unless a grain of wheat falls into the earth and dies, it remains alone; but if it dies, it bears much fruit.”

Such radical measures are the only ones Scripture knows of. Everywhere we read about putting the old man to death, denying self, and giving up everything to follow Christ. There are so many more passages one can appeal to here. Let me just offer a few: 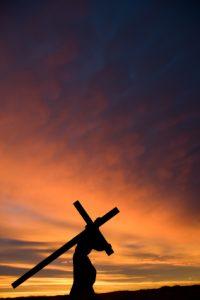 -Matthew 10:38 And he who does not take his cross and follow after Me is not worthy of Me.
-Romans 6:6-8 knowing this, that our old self was crucified with Him, in order that our body of sin might be done away with, so that we would no longer be slaves to sin; for he who has died is freed from sin. Now if we have died with Christ, we believe that we shall also live with Him,
-Galatians 2:20 I have been crucified with Christ; and it is no longer I who live, but Christ lives in me; and the life which I now live in the flesh I live by faith in the Son of God, who loved me and gave Himself up for me.
-Galatians 6:14 But may it never be that I would boast, except in the cross of our Lord Jesus Christ, through which the world has been crucified to me, and I to the world.
-Philippians 3:8 More than that, I count all things to be loss in view of the surpassing value of knowing Christ Jesus my Lord, for whom I have suffered the loss of all things, and count them but rubbish so that I may gain Christ,
-Colossians 3:5 Put to death, therefore, whatever belongs to your earthly nature: sexual immorality, impurity, lust, evil desires and greed, which is idolatry.

There is nothing half-hearted about these passages. This is all or nothing stuff. The Christian life begins this way, and the Christian life continues this way. And all the great Christians have known these truths. Two quotes come to mind here.

In terms of coming to Christ, C. S. Lewis put it this way, “Fallen man is not simply an imperfect creature who needs improvement: he is a rebel who must lay down his arms.” And again, “Nothing that has not died will be resurrected.”

Dietrich Bonhoeffer, who was killed by the Nazis for taking his faith seriously, reminds us of the cruciform life that all believers are called to. As he wrote in The Cost of Discipleship:

The cross is laid on every Christian. The first Christ-suffering which every man must experience is the call to abandon the attachments of this world. It is that dying of the old man which is the result of his encounter with Christ. As we embark upon discipleship we surrender ourselves to Christ in union with his death—we give over our lives to death. Thus it begins; the cross is not the terrible end to an otherwise god-fearing and happy life, but it meets us at the beginning of our communion with Christ. When Christ calls a man, he bids him come and die. It may be a death like that of the first disciples who had to leave home and work to follow him, or it may be a death like Luther’s, who had to leave the monastery and go out into the world. But it is the same death every time—death in Jesus Christ, the death of the old man at his call.

All this can be put under the biblical rubric of holiness. The root of the term has to do with being set apart, to be separate. Here I want to share more thoughts on this from a volume I recently just acquired, but am finding quite useful. The book has actually been out for two decades now.

The author is Sinclair Ferguson, a seasoned pastor and theologian. I have a number of his books, many of which I only recently bought. The book in question is called A Heart for God (Banner of Truth, 1997, 2017). Although a brief book, it is a very important book, given its subject matter. It is about God, and the knowledge of God. He begins his slim volume with these words:

“What is the most important thing in the world to every Christian? It is to grow in the knowledge of God. The knowledge of God is the heart of salvation and of all true spiritual experience. Knowing Him is what we were created for. It will occupy us throughout all eternity. In Scripture, it is almost equivalent to salvation.”

Chapter 8 of his book deals with the vitally important issue, “The Holy One of Israel”. While the whole of Scripture deals with this, Ferguson reminds us of this: “Nowhere is the holiness of God more fully expounded than in the teaching and preaching of the prophet Isaiah. He knew the Lord as ‘The Holy One of Israel.’ On some thirty occasions Isaiah used that title for God.”

Ferguson offers us three things we can glean from Isaiah’s encounter with God, and what we should expect as well:

First, we will realise that the holiness of God is the total integrity of his being. To encounter him in his holiness is to be overwhelmed by God. Christians in this century have sometimes spoken of being ‘broken before God.’ That almost expresses what Scripture means, but not quite. For God does not ‘break’ his children (‘A bruised reed he will not break, and a smouldering wick he will not snuff out’ was how Isaiah later described the Servant of the Lord – Is. 42:3). Rather, what we experience is more akin to being ‘dismantled.’…

What we come to realise in God’s holy presence is that we are what our spiritual forefathers called ‘totally depraved.’ We may not be ‘as bad as we might be.’ But the point is that no part of our lives is free from the pollution of sin. There is a spiritual down-drag everywhere. Our sinfulness sets up spiritual ‘G-forces,’ which influence every single action and motivation. In the presence of the Holy One of Israel, we can only say, as Paul discovered, ‘I am unspiritual, sold as a slave to sin . . . What a wretched man I am!’ (Rom. 7:14, 24)….

The immediate repercussion of this recognition of God’s holiness is that, second, all self-deception is challenged. We see how easily we have misread our true spiritual condition, how superficially we have thought about our relationship to God. We have rather casually compared ourselves with others, and received at least a passing grade in our own estimation. But now, before God, we are ‘undeceived.’ We discover, as did the young Scottish preacher of the nineteenth century, Robert Murray M’Cheyne, that in our hearts lie the seeds of every known sin. Only upbringing, environment, and the restraints of society prevent us from running headlong into sins of enormous proportions….

When the dawn of this day of God’s holiness breaks upon our spirits, we are delivered from all superficial and inadequate thoughts about our own sanctification. We are also preserved from any cheap teaching that encourages us to think that there are short cuts by which we may more easily obtain holiness. Holiness is not an experience; it is the re-integration of our character, the rebuilding of a ruin. It is skilled labour, a long-term project, demanding everything God has given us for life and godliness….

The holiness of God teaches us that there is only one way to deal with sin – radically, seriously, painfully, constantly. If you do not so live, you do not know the presence of the Holy One of Israel.

The discovery of God’s holiness has a third profound impact on our lives: We enter into a deeper awareness of the blessings of forgiveness. This was certainly true for Isaiah…. The effect of this encounter with the Holy One was that Isaiah was prepared for his ministry. He who has gazed at his own sinfulness will be able to persevere in the face of setbacks. He will not be surprised by the sins of those of whom he ministers; he will grieve over them….

What is more, he has a glorious view of God, and of his power to save and to keep. The man who has seen little of his own sin will be little acquainted with the wonders of grace…. What we know of God determines the ministry and service we render. Perhaps nowhere is this truth more critical than at this point: He who would know what fruitfulness is must know what God’s holiness is.