My readers by now should be used to somewhat odd articles with somewhat odd titles. But there is a reason – or two – for a piece such as this. The first simply deals with my recent reading habits, and that has included a lot of reading on the life of Winston Churchill. 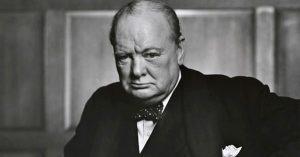 One need not read many biographies or autobiographies about Churchill to learn of his rather sad childhood. He had almost no loving relationship with his father, who was highly critical of young Winston. And his mother – although she encouraged him along the way – was not all that much better, and both parents were largely absent as he grew up.

But one will also note that his upbringing had much to do with the great leader he later became in adulthood. All the good books about his life spend some time on this reality. Geoffrey Best offers us a representative quote on this from his 2001 biography, Churchill: A Study in Greatness (Penguin):

“His childhood was in some respects miserable and it seems impossible to believe that the extraordinary personality of his adult years was not largely forged by it, or in reaction to it. His private life no doubt interacted significantly with his public life.”

In addition to less than ideal parenting, he faced other obstacles. As another biographer of Churchill put it:

Winston’s childhood did little to suggest he would come anywhere near to matching the achievements of his illustrious predecessors, such as the Duke of Marlborough. He was prone to ill health, had various speech impediments (including a lisp and a stammer), and had an academic record that could at best be described as patchy. A letter from the assistant master at Harrow sent to Churchill’s mother, Lady Randolph, in July 1888, for instance, detailed several of his faults, including forgetfulness, carelessness and a lack of punctuality.
He began his schooling at St George’s in Ascot aged eight, and his various physical frailties made him an obvious target for bullies. It was, perhaps, this experience that made him so determined to stand up to apparently mighty foes in later life.

A second and much less important reason for writing this is autobiographical. I did not have a terrible childhood, but it does not contain many pleasant memories either. A long-standing poor self-image among other things meant I did not have the cheeriest of childhood.

Indeed, by my early teens I was suicidal for various reasons. The one thing – the only thing – that could turn all this around was a conversion to Christianity when I was 18 years of age. But those interested in more details on this can read all about it here: billmuehlenberg.com/2012/06/27/coming-home-my-testimony-part-1/

I am not saying I had an unhappy childhood and I am now a great leader – far from it. Only the former part of that is more or less true. But a rather wasted and aimless life was turned around back in 1971, and hopefully some things of worth have been achieved since then.

They may not be great things, but they are some steps above from where I was once at. An active Christian ministry, some books under my belt, some articles, some influence here and there – that is something. Of course greatness is ultimately not measured by what one does but who one is.

In that sense I feel terribly un-great. But enough about me. As I kept reading about Churchill it occurred to me that likely many other people who we now think about as being great began with a less than great childhood. I actually used the words of my title to do an Internet search on this.

Some web hits just looked at various celebrities, pop stars, Hollywood figures, and so on. But I eventually came across some other helpful pieces. A number of names emerged. Many great people that we all know of today had difficult and unhappy childhoods.

Some of them include: Beethoven, George Washington, Ben Franklin, and Albert Einstein, to name but a few. Of course having a bad childhood is no indicator that one will become a great leader. Many folks with a lousy childhood went on to be horrible adults.

One example of this would be the cult leader and mass murderer Charles Manson. Talk about a lousy upbringing, consider just a few snippets from his story:

Charles Manson’s mother was a 16-year-old girl named Kathleen Maddox, and his father was a transient laborer named “Colonel,” whom he never met. Kathleen may have been a prostitute, although Manson denies that’s true. Regardless of how she made her money, Kathleen was a far cry from the world’s best mother.
When Manson was born, she didn’t even bother giving him a name. When the nurses handed her the paper, she wrote “No Name,” and to this day, his birth certificate is registered as “No Name Maddox.”
It wasn’t until Kathleen married William Manson that Charles got the full name he’s known by today. This didn’t mean that he earned a supporting father figure, though. William disappeared from his family before he was old enough to form memories.
When he was still an infant, Kathleen took her son to a restaurant and had him resting on her lap when she sparked up a conversation with the waitress. The waitress was eager to become a mother herself, and thinking that baby Manson was cute, she joked that she’d buy him from Kathleen.
“A pitcher of beer and he’s yours,” was Kathleen’s reply. The waitress probably thought she was joking, but she brought Kathleen an extra pitcher anyway. What she didn’t expect was that as soon as Kathleen finished her beer, she sneaked out of the restaurant—and left Charles behind.
Manson only made his way back home because his uncle found out what had happened. He tracked down the waitress a few days later and got the boy back to his mother.

Oh dear me. Of course the obverse of what I just said above holds true here: a lousy upbringing does not need to lead to a lousy adult life. Again, people like Churchill demonstrate how sad childhood experiences can be overcome, and greatness can still be achieved.

My point in all this is threefold. First, parenting matters, and it matters significantly. People are what they are in large measure because of their parents. That entire theme cannot here be explored, but let me just repeat how important a mother and a father is to a young child.

In his book The Church Jesus Prayed For, Michael Cassidy records this moving story:

I remember being deeply moved when I first read the story of the famous James Boswell (1740-94) who became celebrated as a close friend of Samuel Johnson, the writer, philosopher, and wit. Boswell tells in his autobiography of a day when, as a child, his father took him fishing. He records it as the most wonderful and memorable day of his childhood. Later his father’s journals were found and they recorded the father’s commentary on that day in these terms: “Today went fishing with my son. A day totally wasted.” For the father, a day of totally wasted effort, and for the son the highlight of his childhood.

Second, the truth is, the often quite sad childhoods that we have had can nonetheless become a platform for later greatness. In one sense, nothing is wasted in our lives, and past experiences – as bad as they might have been – can often become the foundation for future greatness.

From a biblical point of view, we can think of that comforting passage from the book of Joel where we read about how God “will restore the years that the locust has eaten” (Joel 2:25). In one sense, nothing in our lives is ever wasted, and God can use our past experiences – both good and bad – for his purposes.

Third, and related to this: we need not let our childhood experiences determine who we become. Sure, they have a huge influence on us, often for the remainder of our lives. But real change is possible. This is especially true when we bring God into the picture.

Jesus Christ is in the business of transforming lives. He can take the most messed-up, bummed-out, and beaten-down lives there are and turn them around radically. We have 2000 years of church history giving us millions of examples of this.

My own story of course was not so radical. By the standards of many, I had a pretty good childhood. Sure, I was all rather morose, depressed, lonely and withdrawn, but many kids have gone through much, much worse situations. But a screwed-up 18-year-old kid had his life wonderfully changed back in August of 1971.

The truth is, no matter what you have gone through as a child, or even through most of your life, there is hope for something better. No lives are so bad that they cannot be redeemed and transformed, even at a late age. Simply consider one of the greatest persecutors of the early Christian church.

God zapped Saul in his tracks and he became the mighty Apostle Paul. He also changed the hardened slave-ship captain John Newton into a soft and loving Christian who wrote the hymn Amazing Grace. And he took a no-hope messed-up hippy like myself and set me on a new path.

He is able to change anyone who will allow him to do so. If you have had a particularly unhappy or difficult childhood, that need not determine how you live the rest of your life. Let God come in and turn things around. He is in the change business. He takes even the worst of self-centred sinners and turns them into trophies of his grace.

And believe it or not, he can even weave in some of those unpleasant experiences of your childhood into a new and improved adult life. He can use what you went through for his glory. He is a gracious God, and he will redeem things if we let him.

As Newton put it:

Amazing grace! How sweet the sound
That saved a wretch like me!
I once was lost, but now am found;
Was blind, but now I see.