Those faithfully reading through the Old Testament should be in the final three historical books, which appear just before the Wisdom literature (Job, Psalms, etc). Ezra and Nehemiah tell the story of the return from exile, the restoration of Jerusalem, and the rebuilding of the temple, while Esther tells us about God’s providential care of the Israelites.

And all this happened just as was foretold by Moses, Jeremiah and others. In Deuteronomy 30:1-3 for example we find these words: 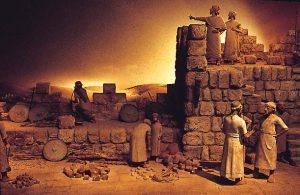 These two shorter books deal with this important chapter in Israel’s history. The previous books of Kings and Chronicles told the story of how Israel and Judah were subdued and taken into exile because of sin and disobedience. Judah’s 70 years of captivity in Babylon now comes to an end with some of the Jews returning home.

The three key leaders here were Zerubbabel, who rebuilt the temple; Ezra, who spiritually ministered to the Jewish people; and Nehemiah, who rebuilt the wall around Jerusalem. A rough timeline would include these approximate dates:

Just as with Samuel, Kings and Chronicles, Ezra and Nehemiah were originally one book in the Hebrew Bible. They both tell one story which covers around a century. Henrietta Mears offers us some of the similarities between the two books:

Both books begin at Persia and end at Jerusalem.
Both center around the man of God who wrote them.
Both begin with a Persian king’s decree.
Both tell of building as their chief theme.
Both books contain a long prayer of humiliation and confession in the ninth chapter.
Both end with the purification of the people.

As to Ezra, James Hamilton notes how its 10 chapters can be outlined: “Ezra falls nicely into two parts. The first part, chapters 1-6, covers 80 years and concludes with the rebuilding of the temple. The second part takes place in just one year and concludes with the people sending away foreign wives. Both parts begin with a Persian decree, contain a list of returnees, and continue with an account of opposition overcome.”

Various authors have highlighted the ability of Nehemiah as a leader, and the characteristics of his leadership. There is much to be learned here. James Montgomery Boice for example offers us four key aspects of his leadership: his submission to God; his ability to focus on the right goals; his wisdom in handling complex situations; and his courage to act decisively.

Earlier I penned a piece looking at some of the spiritual lessons to be found in the book of Nehemiah: billmuehlenberg.com/2014/06/17/nehemiah-doing-the-work-of-god/

As I wrote in that piece, a major theme we find there is we must both pray and work:

The work of God must be done in practical terms (we must do something) but it also must be buttressed by prayer and spiritual warfare. Either one without the other will not get us very far. Working like mad without prayer cover is futile, but simply praying while doing nothing won’t get us very far either. We see this clearly spelled out of course in Neh. 4:16-23.

As mentioned, this unique book is all about the divine care of God’s people. The setting is still in Babylon (now under Persian rule), where a number of Jews had chosen to stay behind instead of returning with the other exiles. The amazing story told here informs us of God’s close and intimate awareness of, and participation in, the affairs of men.

Matthew Henry says, “If the name of God is not here, His finger is.” Or as Fee and Stuart put it, “Although the book of Esther is known for the fact that God is never mentioned in the book (cf. Song of Songs), the author nevertheless expects his intended readers to see God at work at every turn in the story.”

They offer this summary: “The book of Esther tells the story of God’s providential protection of his people during a bleak moment in the Persian empire, thus preparing them for the future gift of the Messiah.” Or as I put it in an earlier article:

The Old Testament book of Esther is much loved by many, especially by Jewish readers. For in it we learn about the remarkable preservation of the Jewish people. It is an altogether providential occurrence, although rather oddly, God never gets a mention in the book.
Indeed, it seems rather strange to talk about the theological message of the book, given this apparent divine absence. Not only is God not mentioned, but neither is prayer, the law, the temple, or other clear religious themes. But both Jews and Christians consider the very heart of the book to be about God’s providence.
It is about how God providentially protects his own people and brings about remarkable reversals of fortune. In what seems to be a bunch of amazing coincidences, we see God at work behind the scenes, accomplishing his purposes. And once we are aware of the background to this book, we can see how very relevant it is to our own situation today.
billmuehlenberg.com/2011/02/06/esther-and-providence/

All three of these books tell us that God is greatly concerned about the nations. Yes, he has a special love and care for his own people, but he also deals not just with individuals, but nations as well. And God’s people can cooperate with God in being real history makers. See more on this here: billmuehlenberg.com/2017/08/03/prayer-nations-rees-howells-dunkirk/

An expository commentary worth getting is this: