The first of five books which make up the poetic books, or the wisdom literature portion of the Old Testament, is the book of Job. Before discussing it, let me say a few words about this type of literature. While there is of course poetry found throughout the Old Testament, and most OT books have at least some poetry, it is especially found in these five books.

The other four books are: Psalms, Proverbs, Ecclesiastes, and Song of Songs. However, trying to delineate the wisdom literature can be a bit imprecise. Some narrow it down to just Job, Proverbs and Ecclesiastes, and some take a broader view, adding books like Ruth and Esther to the five main books. But here I will just deal with the five books often associated with this. 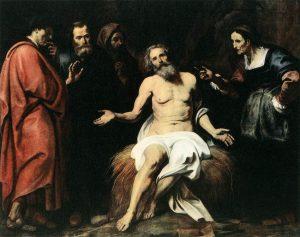 The ESV Study Bible says this: “Each of the books included in this overarching introduction has distinctive content. Still, in these poetic strands of the Bible, whether inclined toward wisdom or hymnody, there are a number of themes that surface repeatedly.” They list five:
-the fear of the Lord
-the limits of human wisdom
-the righteous and the wicked in relation to God
-suffering
-the nature of true piety

Tremper Longman explains how Job fits in with the wisdom genre:

Job famously suffers, but the book’s primary issue is not the nature of suffering, nor is it interested in answering the question of why we suffer. No, Job’s suffering presents the occasion for raising the real issue of the book: wisdom. Job is not a theodicy but rather a wisdom debate. All the human participants in the book present rival claims to wisdom and dispute each other’s perspective. Thus, like Ecclesiastes, Job presents more than one voice, and proper interpretation depends on properly situating these varied voices.

Assuming Job lived during the time of the Patriarchs, it appears that serious reflections on the problem of suffering and evil have been around for at least four millennia then. Of course other patriarchs, like Abraham, also had to grapple with the problem of evil on a very personal level (as in the sacrifice of his son: see Genesis 22). Christopher Ash (2004) says this:

In the 42 chapters of Job we find the lengthiest discussion of the problem of suffering and evil in the Bible, and how to wisely understand it. It is not only a book filled with deep theological truths about God and his dealings with man, but it is a literary masterpiece as well.

In his 1969 Introduction to the Old Testament, R. K. Harrison said this of the book: “by any standard of comparison it ranks among the most significant pieces of world literature. Certainly it is unmatched in the writings of the Old Testament for its artistic character, its grandeur of language, depth of feeling and the sensitivity with which the meaning of human suffering is explored.”

David Pawson says this about the book:

It is a great work of literature and defies strict classification. It combines epic poetry, drama and debate with an intriguing plot and profound dialogue. Not surprisingly, the book has been much admired by some of the greatest minds. Thomas Carlyle said, ‘It is a noble book’, Alfred Lord Tennyson described it as ‘the greatest poem of ancient or modern times’ and Martin Luther said, ‘It is most magnificent, sublime, as no other book of Scripture’. It has been placed on a par with the works of Homer, Virgil, Dante, Milton and Shakespeare as one of the greatest pieces of literature of all time.

A very simple outline of the book goes like this:

Fee and Stuart break it down a bit further:

Chapters 1-2 prologue
Chapters 4-27 the three dialogues-disputes
Chapter 28 the discourse on “Where does wisdom come from?”
Chapters 29-41 the three monologues
Chapter 42 epilogue

The book makes it clear that there is not a strict one to one connection between sin and suffering. There are no neat and easy answers here to suffering. That was the problem of Job’s friends: trying to get everything wrapped up in a tidy theological package.

But, as Mike Mason put it, “it is the essence of hypocrisy to cling to easy answers in the face of difficult realities. But with Job easy answers are not possible. Implicit in the book is the lesson that theology must not try to be any clearer about God than God is about Himself. This is where so much fundamentalist religion goes astray, as it seeks to pin things down that are unpinnable, to systematize truths that by nature are unsystematic.”

A key theme found in the book is that God is in control. He may have been working through the instrumentality of Satan, but it was still God who is calling the shots. Even Eliphaz, the friend of Job, who had a much more limited perspective on these matters than we do, could say with confidence: “For he wounds, but he also binds up; he injures, but his hands also heal” (Job 5:18).

While he was wrong to make the claim that Job suffered as a direct result of sin, he was right to acknowledge that it is Yahweh who both smites and heals. Thus while his theodicy was defective, his theology was on surer footing. Says Robert Alden: “Eliphaz had a high view of God. He was no dualist who saw the bad coming from an evil deity and the good coming from God.”

For more lessons and spiritual truths to be gleaned from this important OT book, see an earlier piece of mine: billmuehlenberg.com/2016/05/25/gospel-according-job-2/

Some useful introductions to wisdom literature are:

Critical and academic commentaries on Job that are quite helpful include:

Expository and devotional works include: