With the cause of the blaze that took down much of Notre Dame still uncertain (was it an accident, or arson, or terrorism?), many commentators have already noted the deep symbolism of the event. While the smoke still rises, many are asking if this is not a fitting picture of France in particular, and Europe and the West in general.

That is, with irreligion reigning supreme, and Europe being the most secular continent on earth, is not this tragedy a very graphic picture of what has been happening for quite some time now? Sure, around half of the French population still claims to be Christian in various forms – but that would largely be nominal at best.

The secularist malaise has certainly penetrated France where it matters the most: in politics, the media, philosophy, education and law. That the common man may still pay some lip service to Christianity counts for little. Several centuries of the assault on faith has borne noticeable fruit. The French Enlightenment was a key component in all this. 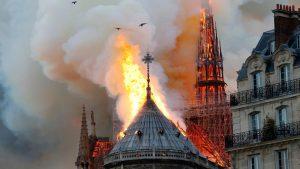 And of course we look to 1789 as a major expression of all this. The ravages of revolutionary thought and action in Paris and beyond are well known. Diderot could famously declare that “man will never be free until the last king is strangled with the entrails of the last priest”. And that is just what happened.

Thousands of clerics were executed (perhaps as many as 5,000), with many tens of thousands forced to flee. Churches were closed, looted, and destroyed, and church properties were confiscated. People were forbidden from wearing crosses, church bells were not allowed to ring, religious processions were banned, and a secular war of terror was effectively unleashed on the French people.

And of course the very same cathedral in Paris was desecrated by the militants with a Goddess of Reason set up in its high altar in 1793 with a nation-wide “Festival of Reason” promoted. All this was nothing less than full-tilt state-sponsored atheism being established. Thankfully it did not last long and eventually the cathedral was converted to store food.

Move ahead to 2004 and the Constitution of Europe. Hugely significant – and certainly ominous – is the fact that the 70,000-word constitution does not once mention the term ‘Christianity’. This is really quite incredible when you think about it. What future is there for a free Europe which has spiritual and cultural amnesia, forgetting its very foundations, ignoring its very roots?

Raw secularism will never satisfy the human soul nor provide the social and moral glue needed for a successful and vibrant culture. It is as G. K. Chesterton put it in his 1908 classic Orthodoxy: “The secularists have not wrecked divine things; but the secularists have wrecked secular things, if that is any comfort to them. The Titans did not scale heaven; but they laid waste the world.”

Not surprisingly therefore we now see Islam filling the void in Europe with all the disastrous results which follow such massive shifts. As mentioned, the exact cause of this fire is not at this point known, but we do know some other things with much more certainty. For example, France and Europe have experienced countless attacks on churches in recent years as I discussed in my previous article: billmuehlenberg.com/2019/04/16/notre-dame-and-the-death-of-europe/

Indeed, many people have been warning about the Islamisation of Paris in particular and Europe in general for years now. Let me quote from just one piece that was penned a decade ago:

Friday in Paris. A hidden camera shows streets blocked by huge crowds of Muslim worshippers and enforced by a private security force. This is all illegal in France: the public worship, the blocked streets, and the private security. But the police have been ordered not to intervene. It shows that even though some in the French government want to get tough with Muslims and ban the burqa, other parts of the French government continue to give Islam a privileged status.

An ordinary French citizen who has been watching the Islamization of Paris decided that the world needed to see what was happening to his city. He used a hidden camera to start posting videos on YouTube. His life has been threatened and so he uses the alias of “Maxime Lepante.”

His camera shows that Muslims “are blocking the streets with barriers. They are praying on the ground. And the inhabitants of this district cannot leave their homes, nor go into their homes during those prayers. The Muslims taking over those streets do not have any authorization. They do not go to the police headquarters, so it’s completely illegal,” he says. The Muslims in the street have been granted unofficial rights that no Christian group is likely to get under France’s Laicite’, or secularism law.
www1.cbn.com/cbnnews/world/2010/august/islamization-of-paris-a-warning-to-the-west

Things are of course much worse today. Over the years numerous books have been written by those very concerned about how far down the tubes Europe has been regressing. Consider just 16 of them penned over the past 20 years:

But let me return to where I began. Whither Paris and the cathedral? French President Macron has promised to rebuild. Several French billionaires have already pledged hundreds of millions of euros. While far too many priceless treasures have been irretrievably lost, the cathedral can be rebuilt. It will once again rise above the Paris skyline.

Much more difficult to replace is the hole in the soul – both in the lives of individual Frenchmen, and in the nations of Europe. So penetrating and so successful has been the secularisation of Europe that any sort of major spiritual renewal will be a very big ask indeed.

Let me offer some concluding words on this, first by some Christian thinkers. Rod Dreher writes:

This catastrophe in Paris today is a sign to all of us Christians, and a sign to all people in the West, especially those who despise the civilization that built this great temple to its God on an island in the Seine where religious rites have been celebrated since the days of pagan Rome. It is a sign of what we are losing, and what we will not recover, if we don’t change course now….

The flames of Notre Dame de Paris are a call to repentance and conversion. As the monks of Norcia have been doing since their church met catastrophe, so let us all do as we mourn the loss of one of Christendom’s greatest cathedrals. There can be no greater tribute to what this holy and revered temple meant to its builders and to all those faithful who worshiped beneath its vaults all these centuries than to turn, in sackcloth and ashes, back to God, and to raise again the vaults of His sanctuaries in our hearts and families and communities — while there is still time.
www.theamericanconservative.com/dreher/notre-dame-de-paris-sign-of-the-times/

Or as Rich Lowry wrote:

A cultural calamity played out on live TV when the Paris cathedral that has been a focal point of Christendom for so long was apparently gutted by a raging fire, destroying a significant part of an inheritance built up over hundreds of years in a few hours. Notre Dame stands for so many qualities that we now lack — patience and staying power, the cultivation of beauty, a deep religious faith, the cultural confidence and ambition to build a timeless monument of our civilization — that the collapse of its spire was almost too much to bear.
www.nationalreview.com/2019/04/notre-dame-cathedral-fire-distressing-message/

And finally, some wise words by two well-known Jewish commentators. Dennis Prager was surely right when he wrote:

The symbolism of the burning of Notre Dame Cathedral, the most renowned building in Western civilization, the iconic symbol of Western Christendom, is hard to miss. It is as if God Himself wanted to warn us in the most unmistakable way that Western Christianity is burning — and with it, Western civilization. Every major Western (and one major non-Western) social and intellectual force has conspired to rid Europe of Christianity and the civilization it produced.
townhall.com/columnists/dennisprager/2019/04/16/notre-dame-an-omen-n2544832

And this shorter but no less potent tweet by Ben Shapiro also deserves to be run with here: “If we wish to uphold the beauty and profundity of the Notre Dame cathedral, that means re-familiarizing ourselves with the philosophy and religious principles that built it.”

9 Replies to “Notre Dame and the Fate of the West”