Some Christians really seem to think that they can improve on Jesus!

One of the most appalling things you will find in some parts of the Christian church today is the mindset that we can actually do things better than Jesus. Some Christians and church leaders believe that they can somehow out-Jesus Jesus. Sure, they may not say it exactly that way, but that is the clear implication of what they are saying and doing. 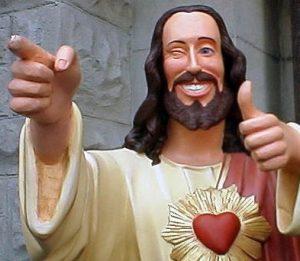 I have seen too many cases of this over the years. Consider just one example. Some years ago I heard a megachurch pastor say that we cannot preach like they did in older times. ‘Maybe in the past one could get away with a gospel that spoke about hell, judgment to come, repentance and the wrath of God, but today this will just not cut it. We now need to do things differently.’

Um, reality check: There is one person in the New Testament who spoke more about hell, judgment to come, repentance and the wrath of God than anyone else. His name was Jesus. Yet some of these contemporary Christian leaders believe that is no longer how we must go about doing things today.

‘It may have worked for Jesus and Christian preachers and leaders for the past 18 or 19 centuries, but we must do things differently today if we want to reach people. We need to get with the times. Things change, and so should we.’ So they are in fact saying that Jesus got it wrong.

No, Jesus was not wrong to preach and teach about such things, and neither are we. In fact, we can use a whole lot more of this sort of stuff today. All we get in so many pulpits in the West is feel-good mush, motivational pep talks, and endless messages about how much Jesus accepts us just as we are, and how he wants us to succeed and be happy and be prosperous and always be cheery and even lose a lot of weight.

We not only hardly ever hear about sin and repentance, but we hardly ever hear about the true cost of discipleship. We hear almost nothing about taking up our cross, denying ourselves, saying no to the old man, and crucifying the flesh. We just hear messages in which it is all about me. But a me-centred gospel is the polar opposite of the biblical gospel.

And then we are surprised that so many people are falling away from the faith. We keep hearing about well-known celebrity Christian leaders who have renounced their faith and dumped their families, and so on. Should we really be surprised about this, given the anaemic, sugar-coated and fleshly gospel that is mostly being preached today?

Thankfully I am not alone in thinking this way. Some others have also noted this major change in the gospel message. For example, just hours ago I was reading about how the gospel has radically shifted over the centuries. In his brand-new book The Identity and Attributes of God, Terry Johnson speaks to this very thing. He is worth quoting at length:

What the Bible teaches about God’s holiness, his purity and perfection, his love of righteousness and truth, his abhorrence of sin, his rewarding of the good, his wrath and anger against evil, his demand for repentance, and the insistence upon the purified lives of his people, is a much confused, much maligned, and much neglected part of the Christian faith. Until the middle of the nineteenth century, nearly all gospel preaching was of the ‘fire and brimstone’ variety. Preachers proclaimed God’s holiness, God’s law, God’s wrath and anger against sin, the necessity of the new birth, the need for faith and repentance, and the importance of holy living. Jonathan Edwards’ ‘Sinners in the Hands of an Angry God’ is perhaps the supreme, if notorious, example of the older gospel message. Whatever else might be said about it, such preaching did result in deep repentance, genuine faith, and a deep, deep appreciation of grace.

About the middle of the nineteenth century a shift occurred under the influence of post-Enlightenment romanticism and liberal theology. The emphasis in Christian preaching shifted from the holiness of God to the love of God. ‘God is love’ became the primary concern of the gospel message, while ‘God is light’ (grammatically identical with the former) slipped into the background….

This shift suited the ethos of the times and was widely influential on subsequent evangelicalism. Modern people were becoming increasingly uncomfortable with the biblical picture of a God who in judgment would destroy whole nations, men, women, and children. . . . Modern people did not like the ideas of wrath, judgment, vengeance, eternal punishment, and hell. Such notions were considered unpleasant, discouraging, and even primitive. Some moderns even did not like the cross: it was far too violent, far too brutal and bloody, to attribute to God….

God has been receiving a ‘makeover’ for some time now, as his ‘harsher’ attributes have been toned down or eliminated and his ‘softer’ attributes highlighted. Modern people have tamed and civilized the God of the Bible. The result is a god who is but a shadow of his former self. Although they would never have directly said, ‘Let’s make a new god’, this essentially is what has happened….

Jonathan Edwards convincingly argued in his great sermon ‘Men Naturally Are God’s Enemies’ that people have always found the biblical God distasteful. It may not seem so. They may go to church, read their Bibles, pay tithes, keep the Sabbath, and even pray and worship. Yet in doing so they worship not the God of the Bible, but the god of their own imagination. If shown the biblical God, they will go nearly mad with rage. People hate that God and want nothing to do with him (Rom. 1:30).

Yes quite right, and as if on cue, I have had exactly this very thing happen to me just moments ago on the social media. Some gal came to an earlier post of mine about a well-known Christian leader who had recently apostasised. She was very upset by what I and other commentators had said. She made it quite clear how ‘unChristian’ and ‘unloving’ we were, and she actually said this apostate would be in heaven.

To that I replied: “If a guy has rejected the faith, rejected his wife, and is cosying up to the homosexual agenda, yet you claim he will be in heaven regardless, then your view of God is a far cry from the God of the Bible. And if you had actually bothered to read my article instead of merely emoting here, you would have seen that I said we all need God’s grace and we must pray for him.”.

That just got her even more angry, and she went off on a lengthy series of tirades, attacking us, judging us and accusing us of all manner of things. Oh dear, you just gotta love it when folks tell us how spiritually superior they are and what great Christians they are because they say it is so very wrong to judge and condemn others and even decide that other believers are not Christians.

But at the very same time they come to my page and judge and condemn me and others, and even decide that we cannot possibly be true Christians. Wow. Jesus spoke about Pharisees and their hypocrisy. Needless to say, I finally had to bring her increasingly ugly, unedifying and fleshly attacks to a halt by letting her go as a social media ‘friend’.

It seems that this was the perfect example of the very thing I am writing about in this article. She has obviously grown up in one of these churches which preaches nothing but ‘love,’ regardless of how little biblical content that term may have. But biblical truths like the holiness and righteousness and wrath of God are likely never heard about in her circles.

So she has constructed a god in her own image and likeness. Such a god bears no resemblance to the God of Scripture, but looks everything like the gods of this age. Such is the bitter fruit of several generations of preaching a watered-down and men-pleasing gospel.

I don’t think life is always just full of coincidences. I instead think that often God has some neat divine timing going on. The impetus to write this piece, based in part by what I had just read in Johnson’s book, was nicely augmented by this exchange with this angry critic.

It is not pleasant to have to deal with people like that (and I did tell her I was praying for her, and I hope you will pray for her as well), but it certainly helps to see that what I am talking about here is not just theoretical, but we find real-life cases of this all around us.

9 Replies to “‘We Can Do Better Than Jesus’”