When people stop believing in God, they do not become irreligious – they simply find new gods to worship.

Everyone is religious. Christians are religious. Hindus are religious. Muslims are religious. And believe it or not, atheists are also religious, as are secular humanists and others. Everyone has a set of beliefs and values that they live their life by. If a person does not believe in and worship the one true God, then they will find another god.

Often that god is self – or some cause that people devote their lives to, or some belief that they commit themselves to. They will give themselves over to some ultimate explanation of life, some moral cause, or some purpose greater than themselves. 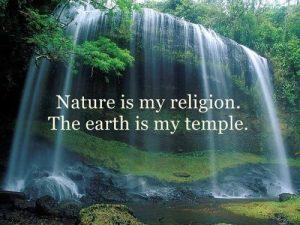 Such belief systems, philosophies, or worldviews serve “to interpret the universe for them, to guide their moral decisions, to give meaning and purpose to life, and all the other functions normally associated with religion” as Nancy Pearcey puts it. Thus there is such a thing as secular religions.

In the West today we find countless people who have rejected Christianity but have not stopped being religious. They have simply substituted other gods for the God of the Bible. They still want their life to have meaning and purpose. They still have a sense of making atonement of some kind for their various failings and shortcomings. They still have guilt feelings that they seek to deal with.

Thus they will often find substitute religious causes to join. These groups have secular versions of biblical themes such as some sort of beginning, a fall, sin, redemption, and eschatology. These counterfeit religions give these folks a sense of meaning and fulfillment. That is because they are in fact made in the image of God, and if it is not the true God that they worship and follow, then they will make up their own.

One of the big god-substitutes of today is the green religion. Many people who have rejected more traditional religion have embraced environmentalism as their big picture belief system. It gives them a sense of belonging and purpose, and it assuages their guilt. It has its own version of the biblical story line.

Many commentators have pointed all this out. Let me mention just one important thinker who was making this case in the early 1980s. In 1983 American sociologist Robert Nisbet wrote an article in the American Spectator entitled “Modern Man and the Obsession”. In it he said this:

As an historian, I am obliged by the record of the Western past to see Environmentalism — of the kind espoused by the Commoners and the Ehrlichs — as the third great wave of redemptive struggle in Western history; the first being Christianity, the second modern socialism.

The appeal of Environmentalism, in its more extreme manifestations at least, becomes irresistible to that permanent cadre of political and social radicals Western society has nurtured ever since the French Revolution. This cadre has never been primarily interested in the protection of nature, but if such a movement carries with it even the possibility of political and social revolution, it is well that the cadre join it; which, starting with the late 1960s, it did.

In its more militant and aggressive manifestations Environmentalism has become a social movement devoted increasingly to political, social, and economic ends. More and more, in both structure and aim, Environmentalism resembles other fundamentally revolutionary movements in Western religious and political history.

Good points. But this article was based on part of a book he had penned a year earlier. In his 1982 book Prejudices: A Philosophical Dictionary, Nisbet had incisively made this case that environmentalism has become the third great redemptive movement in human history, following Christianity and Marxism.

Indeed, said Nisbet, it has its notions of sin, guilt and redemption, its sacred texts and its venerated leaders. And like all false religions, radical environmentalism has its share of zealots. He is well worth quoting from. Consider his opening paragraph:

‘From the Gospel of Capitalist Efficiency to the Gospel of Utopianism’ would serve very well as subtitle here. It is entirely possible that when the history of the twentieth century is finally written, the single most important social movement of the period will be judged to be environmentalism. Beginning early in the century as an effort by a few far-seeing individuals in America to bring about the prudent use of natural resources in the interest of extending economic growth as far into the future as possible, the environmentalist cause has become today almost a mass movement, its present objective little less than the transformation of government, economy, and society in the interest of what can only be properly called the liberation of nature from human exploitation. Environmentalism is now well on its way to becoming the third great wave of redemptive struggle in Western history, the first being Christianity, the second modern socialism. In its way, the dream of a perfect physical environment has all the revolutionary potential that lay both in the Christian vision of mankind redeemed by Christ and in the socialist, chiefly Marxian, prophecy of mankind freed from social injustice.

Consider the issue of sacred texts in the movement:

All mass movements must have their sacred texts: the New Testament for Christians, the Manifesto or Capital for socialists. It is perhaps too early to identify authoritatively the sacred text for all environmentalists in their struggle for the millennium, but at the moment it would appear to be Rachel Carson’s Silent Spring, published in 1962. Carson’s prediction of earth’s doom unless all chemical fertilizers and pesticides were banned immediately had, for the preservationists, the same electric quality given off two thousand years before by Christian preachings and, more than a century before, by Marx’s Manifesto. It was a short step from Carson’s dithyramb of desolation to the position that what is really corrupting of man and earth is technology itself, and nowhere more odiously than within the capitalist industrial system.

He mentions how the early environmentalists were quite different from what they are today. He concludes this way:

In less than a century, however, environmentalism has become, without losing its eliteness of temper, a mass socialist movement of, not fools, but sun worshippers, macrobiotics, forest druids, and nature freaks generally, committed by course if not yet by fully shared intent to the destruction of capitalism.

Taken over the long run, the sin of environmentalism as we know it so stridently today lies in the created myth that nature has become. We are lulled into the belief that nature is benign, above all innocent. The ridiculous conception of human nature that Rousseau and his descendants advanced is matched by the conception of nature as mild in stream and forest. But one would do better to think of nature as Mount Saint Helens, a raging tornado, an unending drought, an earthquake, incessant visits of locusts, ants, and lice, and regular attacks of everything from famine to smallpox. That is how our forefathers saw nature. Only in an age of high and ubiquitous technology is it possible to think differently.

Let me finish by saying two things. One, there is no question that many of the radical greens can properly be called religious zealots. Just think of how fervently and religiously they push their cause, tout their beliefs, and recruit followers or disciples. I have known many who have made a religious faith out of their environmentalism.

Indeed, I think of one individual who used to be a keen Christian, but she seems to have thrown all that away as she has latched onto a single-issue leftist/greens agenda item. She still has religious zeal and commitment, but sadly it seems it is now all for this political agenda, and not for the cause of Jesus Christ.

Two, yes of course, Christians are called to be good stewards of the environment. This is the world which God has made, and we are meant to exercise responsible stewardship over it. We are not to worship planet earth, but we are to care for it. An earlier article discusses this further, and offers some helpful books on the matter: billmuehlenberg.com/2009/11/12/recommended-reading-on-the-environment-and-climate/

As those titles make clear, there are many ways we can be good stewards of the world we live in without succumbing to the utopianism, anti-humanism, nature-worship, and religious mysticism of the radical greens.