Here are more really bad memes that we should not be using or sharing online.

Memes are one way to express important ideas, especially on the social media, if done well and done properly. But far too often they are in fact simply ways to spread falsehoods and lies, because they are too much like dodgy bumper-sticker clichés, leaving out or distorting vital truths. This is certainly the case with religious memes that Christians use all the time. 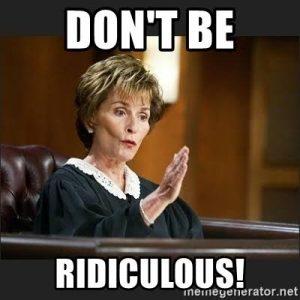 Biblical truth is never to be ripped from its context. And biblical truth involves sharing the whole counsel of God. Indeed, one of the key means of properly interpreting the Bible is to compare Scripture with Scripture. Theological truths are deep and nuanced, and great care is needed to express them properly.

For all these reasons, memes by their very nature can be greatly unhelpful and misleading, causing more harm than good. One can only get so many words on a small meme, and most biblical truths require far more than that. And even if one simply quotes a Bible passage, every text has a context. If we ignore that, we simply have a pretext.

So great care is needed, especially for believers. Some memes can be helpful and accurate, but even then they may need supplementary explanation and discussion. So with all that in mind, let me offer more memes that are too often cringeworthy rather than useful.

“If you believe in yourself anything is possible”

Um, no. This is pure humanism, or mind-over-matter New Age mumbo-jumbo. Yes, we have some believers using this as well, such as those into the name-it-and-claim-it camp, or the positive confession movement, but there is little that is biblical about this.

One thing that comes close to this in Scripture are the words of Jesus in Matthew 19:26: “With man this is impossible, but with God all things are possible.” But this is about having faith, not in yourself, but in God. That is certainly a very huge difference.

Another possible passage to appeal to is Mark 9:23: “Everything is possible for one who believes.” Yes, faith, or belief, is important, but it is the one we place our faith in that really matters. Indeed, the biblical emphasis is NOT on our great faith in God, but our faith in a great God. That makes all the difference in the world.

And simply believing real hard in something will seldom get you results. I can believe really quite strongly that I am some young, handsome rock star with all the ladies swooning over me, but that ain’t gonna happen, no matter how hard I ‘believe’. What we should be believing in must always align with the Word of God and his will.

“And they will know you are my disciples by your:
Rules
Theology
Righteousness
Power
Rhetoric
Purity
Clubs
Love
-John 13:35”

In the meme, the first seven words in the list are crossed out while the last one is circled. This is another misleading meme, one that can cause great damage, simply because it emphasises some biblical truth at the expense of other biblical truth. That will always get you into trouble, and basically all the heresies and cults operate this way.

Is that verse about love in the Bible? Yes. But is that the only way Jesus said we can determine who is the real deal? No. For example, in Matthew 7 he said we will know where a person is at by their fruit. And Paul speaks about right beliefs that indicate who is a real Christian, while James emphasises right works as an indicator of genuine faith and discipleship.

So all of Scripture must be brought to bear here, not just one text set against all the others. Yes biblical love is important, but it needs to be grounded in truth and expressed in good works. And Jesus said if you love him you will keep his commandments. So four of the other things found on the list above ARE clear indications of whether you really are one of Christ’s disciples.

“There But For the Grace of God Go I”

This well-known phrase, often attributed to the 16th century English evangelical preacher and martyr, John Bradford, is another thing we often hear, or find in memes. Once again, it contains some truth. But it can easily be misused and abused.

We would all be in big trouble if it were not for the wonderful grace of God. That much goes without saying. We all need his grace on a daily basis – in fact, moment by moment. But too often we say this as we make excuses for sin. Yes, I suppose that if I were in the same lousy circumstances as some murderer or rapist, I might have gone down a similar path.

But this is giving too much credit to a bad environment or a poor upbringing. One need not go off the rails even if it seems that everything is going against you. Plenty of people have managed to do the right thing and become terrific role models for others, even though raised in very hard and difficult circumstances.

Think of neurosurgeon Ben Carson as just one example. And we even have cases of twins with the same upbringing and even the same DNA – but they end up turning out quite differently. So yes we are to be greatly thankful for the grace of God, but do not let this saying become a cloak to cover up the sins of others.

“If it’s meant to be, it will happen”

This is another dopey and unhelpful saying. The simple truth is this: Christians are not fatalists. Yes, we of course believe that God is sovereign and is in control. But we also believe that people are responsible for their actions as well. This may seem to be a paradox, but both biblical truths are fully emphasised in Scripture.

Thus we must hold on to both truths simultaneously. And the best advice for us is to let God take care of the divine sovereignty bit while we take care of the human responsibility bit. Having a proper view of biblical truths helps us not to become fatalists who do nothing about sin and evil in the world.

We are right to fight great evil, be it the Nazis or the abortion industry. We do not just sit back, do nothing, and foolishly claim that it was meant to be. Again, while God is working out his purposes, we are to do what we are called to do. And that includes being salt and light, and resisting evil and promoting righteousness.

“Only God can judge me”

Once again, this can be partially true – and it can also be partially false! If we mean by this that God alone fully knows everything about us, and he alone knows every detail of the human heart, then sure, no one else knows us like God. So when it comes to matters such as the state of the soul (whether a person is saved or not), at the end of the day, only God knows that perfectly.

But it is also true that we can judge a person who claims to be a Christian by their fruit, by their beliefs, and by their actions. Scripture in other words gives us various tests to see whether people are really true sons of God or not. And given all the biblical admonitions to encourage one another, warn one another, and spur one another on in the Lord, it is fully appropriate that we do make such assessments.

And as I have written in so many articles now, of course we are to judge others. As but one clear example of this, Paul rebukes the Corinthians for refusing to judge one of their own who was living in grievous, unrepented of sin. Paul chews them out and commands them to get it together in this regard (See 1 Corinthians 5). But see more on this issue of judging here: www.billmuehlenberg.com/2008/10/08/thou-shalt-judge/

“The NIV Bible has removed 45 verses and is owned by a person who publishes a Satanic Bible.”

Sadly there are a number of dumb memes like this making the rounds in the social media. This post bears false witness in two crucial ways (and thus should NOT be shared). There are no removed verses. Only the original manuscripts are inerrant, not any later translations.

And verses are not “removed”. They are all assessed according to the best manuscript evidence available, and then they are either used or passed over. More questionable ones that are not used will be noted in the margins of a good Bible translation. So when these folks complain about “missing Bible verses” one simply has to reply, “But compared to what?” There are no missing verses as such.

As to the issue of the ownership of Christian books and Bible publishers, just about every Christian publisher today is owned by some bigger non-Christian outfit, so the charge of “secular ownership” really means nothing. But see more on all this here: billmuehlenberg.com/2018/05/07/the-king-james-only-controversy-part-3/

There is no shortage of such unhelpful, unbiblical and often idiotic sayings, quotes and memes. The very fact that this article is one of many demonstrates this point. I am not saying that believers should not use memes and the like while on the social media. I use them all the time.

But what I am saying is that we need to be far more cautious and careful in what we use and how we use it. Think twice before sharing some meme that you see online. Ask yourselves some critical questions first before sharing. For example, is it fully biblical?

And even if it quotes Scripture, can it be quite misleading and problematic, since the context is missing, or because it gets things out of biblical balance? The meme might make perfect sense to you, but it may mislead or confuse others. So use your God-given brains before rushing to share everything you find in cyberspace.