Christians should be interested in philosophy. Here are 22 books that make that case:

I realise that by using the ‘P’ word I may have lost the great majority of my Christian audience. They may be asking, “What? Philosophy? Why would I want to have anything to do with that?” Well, let me try to answer that question in this article. 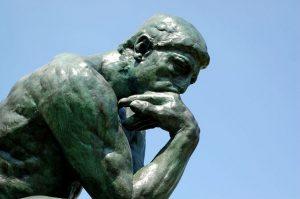 Why should believers have an awareness of philosophy, or want to study it? There would be various reasons for this. Let me offer just two general reasons: One, for much of Western history (certainly during the middle ages) philosophical works and theological works were basically one and the same.

A secular philosophy class will carefully examine the works of Augustine, or Abelard, or Anslem, or Aquinas. But so too would a Christian course on historical theology or church history. Most of the important philosophers for so many centuries happened to be Christians as well. So you cannot study the one without the other in many cases.

Also, ideas have consequences. Many philosophers have had a huge impact on the world we live in – for good or ill. The thoughts of Nietzsche for example had at least an indirect impact on Hitler and the Nazis. And Karl Marx of course had a massive impact on Soviet Communism, and on socialism today. And other thinkers – although not philosophers as such – have also had a major influence, be it someone like Darwin or Freud.

Let me offer a few quotes to finish this section with. One writer, C. Marvin Pate, argues that philosophy and theology are fully compatible – both deal with “the metaphysical real, the surreal world, and ultimate reality.” Indeed, philosophy “is preparation for the gospel; philosophy anticipates and culminates in theology.”

Geisler and Feinberg remind us that we should neither glorify nor vilify philosophy. They argue that the questions of philosophy “are significant and of fundamental and enduring value. It is true that philosophical thought can significantly contribute to theological understanding. However, the errors of philosophy must be recognized and refuted, to confirm the reasonableness of Christianity.”

Philosophers are in the business of thinking clearly. To understand and evaluate their work is excellent mental exercise….
Philosophy over the centuries has had a major influence on Christian theology….
Sadly, through most of the history of Western civilization, philosophy has been governed by non-Christian assumptions….

There would be tens of thousands of books on philosophy, and plenty penned by Christians. Here I am greatly narrowing things down. Many books that could be mentioned here I will not offer, such as books on apologetics, philosophy of religion, comparative religion, competing worldviews, religious pluralism, and so on.

Nor will I look at more specialised books, such as Christian assessments and evaluations of various philosophers and philosophical schools of thought, be it Aristotelianism, empiricism, Thomism, idealism, existentialism, postmodernism, etc.

Thus many obvious names that might be included here are not, even though they are major experts in apologetics, worldviews and Christian thinking. But you will find plenty of titles by folks like Copan, Moreland, Craig, Geisler, Zacharias, Schaeffer and so many others in bibliographies such as this: billmuehlenberg.com/2018/06/18/an-apologetics-reader/

Two areas then are covered here: the history of Western philosophy; and general philosophical concepts, terms and ideas. I offer eleven books in each section, and all the titles approach the subject from a Christian point of view.

A. History of western philosophy

Brown, Colin, Christianity and Western Thought, vol. 1. Apollos, 1990.
This is the first of a three-volume set on the history of Western thought, covering nearly 1300 pages in total. This volume goes up to the eighteenth century, with the last two centuries covered by Wilkens and Padgett (see below). An excellent and comprehensive series.

Brown, Colin, Philosophy and the Christian Faith. Tyndale Press, 1969.
This earlier volume by Brown is not a complete history of Western philosophy. Here he begins with medieval philosophy and takes us up to modern times. But it is a very helpful 300-page overview.

Clark, Gordon, Thales to Dewey: A History of Philosophy. Houghton Mifflin, 1957.
Clark (1902-1985) was an American Reformed theologian who wrote as much on philosophy as he did theology. This older volume of almost 600 pages is still worth reading.

Copleston, Frederick, A History of Philosophy, 9 vols. Doubleday, 1946-1975.
This is a classic work on the history of philosophy which all serious students should have copies of. The Catholic philosopher penned these 9 volumes over three decades, and two further volumes were added to the series after his death. These volumes are still readily found new, or in second-hand bookstores.

Evans, C. Stephen, A History Western Philosophy: From the Pre-Socratics to Postmodernism. IVP, 2018.
This is the most recent volume on this topic, and at 600 pages it is a very helpful and comprehensive assessment of two and a half millennia of Western philosophy. A very good volume indeed.

Frame, John, A History of Western Philosophy and Theology. P&R, 2015.
As mentioned, it is hard to separate theology from philosophy in much of Western thought. In this large volume of 900 pages the noted Reformed theologian does an excellent job of covering both in great detail.

Hicks, Peter, The Journey So Far: Philosophy Through the Ages. Zondervan, 2003.
In 500 pages the English philosopher offers us a helpful and comprehensive overview of the history of Western philosophy (with a smattering of eastern philosophy thrown into the mix as well).

Moreland, J. P. and William Lane Craig, Philosophical Foundations for a Christian Worldview. IVP, 2003.
This is one of those volumes that may fit better in a bibliography on books about apologetics, worldviews, or the philosophy of religion, as opposed to a straight-out history of Western philosophy. But it really does contain a lot of hard-core philosophy, and with these two heavy hitters, and 650 pages, it is well worth mentioning here nonetheless.

Singer, C. Gregg, From Rationalism to Irrationality. Presbyterian and Reformed, 1979.
This is not a full-scale history of philosophy, since the first, short chapter covers all of classical and medieval philosophy. The remainder of this 500-page book covers modern thought, from the Renaissance up till today.

Wilkens, Steve and Alan Padgett, Christianity and Western Thought, vol. 2. IVP, 2000.
This and the next volume continue the set first began by Colin Brown (see above). Here the nineteenth century is covered in some detail, looking at things like romanticism, idealism, Hegelianism and Darwinism.

Wilkens, Steve and Alan Padgett, Christianity and Western Thought, vol. 3. IVP, 2009.
In this final volume in the trilogy, twentieth century Western thought is covered. Philosophical schools such as idealism, existentialism and postmodernism are examined, along with such thinkers as Wittgenstein, Heidegger, Marx, Husserl, Foucault and Rorty.

B. Other general or introductory works on philosophy from a Christian perspective

Copan, Paul, A Little Book for New Philosophers. IVP, 2016.
While this is indeed little (130 pages), it examines big concepts and questions such as why believers should study philosophy, and how they should study it. A useful introductory study.

Deweese, Garrett, Doing Philosophy as a Christian. IVP, 2011.
In some 350 pages the author looks at a number of key philosophical concerns from a Christian perspective. Such issues as metaphysics, epistemology, aesthetics, ethics, and the philosophy of science are covered.

Deweese, Garrett and J.P. Moreland, Philosophy Made Slightly Less Difficult: A Beginner’s Guide to Life’s Big Questions. IVP, 2005.
Although a brief volume (160 pages), the authors offer a helpful introduction to how Christians can think about key philosophical concerns, such as epistemology, metaphysics, ethics, and anthropology.

Geisler, Norman and Paul Feinberg, Introduction to Philosophy: A Christian Perspective. Baker, 1980.
Here five main philosophical themes and issues are covered: What is philosophy? What is knowledge? What is reality? What is the ultimate? What is good and right?

Groothuis, Douglas, Philosophy in Seven Sentences. IVP, 2016.
In this short volume of 160 pages the Christian apologist looks at seven key philosophers and important issues they raised. They include: Aristotle, Augustine, Descartes and Kierkegaard.

Morris, Thomas, ed., God and the Philosophers: The Reconciliation of Faith and Reason. Oxford University Press, 1994.
In this helpful volume a number of key philosophers who are also believers share their stories. All up, twenty contemporary thinkers discuss how their faith intersects with philosophy. They include: Morris, George Mavrodes, Marilyn McCord Adams, Peter van Inwagon, Eleonor Stump, Jerry Walls, and Arthur Holmes.

Nash, Ronald, Life’s Ultimate Questions: An Introduction to Philosophy. Zondervan, 1999.
In this book the American Christian philosopher (1936-2006) does two things: he examines six major philosophers or philosophical systems, and then deals with major issues and problems in philosophy, all from a Christian perspective.

Pate, C. Marvin, From Plato To Jesus: What Does Philosophy Have To Do With Theology? Kregel, 2011.
The first hundred pages of this book offers a very brief overview of the history of philosophy, while the remainder of the book looks at a number of areas where philosophy and Christian doctrine intersect.

Rogers, Jack and Forrest Baird, Introduction to Philosophy: A Case Study Approach. Harper & Row, 1981.
In this useful volume a number of Christian philosophers such as Arthur Holmes, C. Stephen Evans, and Alvin Plantinga look at particular issues in philosophy, such as Socrates and the meaning of life, Aristotle on happiness, Augustine on the problem of evil, Hume and miracles, and so on.

Scruton, Roger, Philosophy: Principles and Problems. Continuum, 1996, 2005.
The English Christian philosopher here introduces us to key philosophical issues, such as the nature of truth, reality, personhood, morality, freedom and God. A brief but quite helpful overview.

13 Replies to “Philosophy: A Guide For Christians”