Christians must not succumb to emotive climate catastrophism:

C. S. Lewis once warned about “Christianity and…” That is, the dangerous tendency to supplement or add to the Christian faith some cause or some ideology or some trend. ‘Christianity and socialism’ would be one such example. Some clueless Christians will always elevate and morph some secular ideology or ism into gospel truth.

All that does is destroy Christianity while it puts on a pedestal some human belief system or activity. Today we see the same thing happening with Christianity and climate alarmism. We have countless Christians, pastors, churches and even entire denominations hopping on the climate change bandwagon, treating it as an extension of the faith. 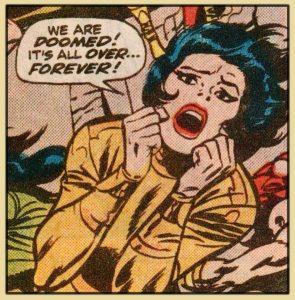 Thus we today have plenty of church leaders preaching the gospel according to Al Gore and Greta Thunberg instead of the gospel of Jesus Christ. We hear plenty of Chicken Little fear-mongering sermons about the end of the world instead of hearing about the real gospel message – the biblical one.

As I have said so often, believers do of course have a responsibility to be good stewards of planet earth. But worshipping it or making it to be the be-all and end-all of our faith simply becomes a form of idolatry. And the more extreme the climate alarmism, the more believers should give it a wide berth.

More than 500 scientists and professionals in climate and related fields have sent a “European Climate Declaration” to the Secretary-General of the United Nations asking for a long-overdue, high-level, open debate on climate change. Just as 16-year-old Swedish climate activist Greta Thunberg addressed the U.N. Climate Action Summit in New York accusing world leaders of robbing her of her future, scientists were begging the United Nations to keep hysteria from obscuring facts.

“Climate science should be less political, while climate policies should be more scientific,” the declaration states. “Scientists should openly address the uncertainties and exaggerations in their predictions of global warming, while politicians should dispassionately count the real benefits as well as the imagined costs of adaptation to global warming, and the real costs as well as the imagined benefits of mitigation.” The scientists underscored the importance of not rushing into enormously expensive climate action before fully ascertaining the facts.

“There is no statistical evidence that global warming is intensifying hurricanes, floods, droughts and suchlike natural disasters, or making them more frequent,” they declared. “However, CO2-mitigation measures are as damaging as they are costly. For instance, wind turbines kill birds and bats, and palm-oil plantations destroy the biodiversity of the rainforests.” www.breitbart.com/environment/2019/09/24/500-scientists-write-u-n-there-is-no-climate-emergency/

And one website has been set up where concerned scientists can declare their concern about the catastrophists. So far nearly 31,500 American scientists have signed it, declaring that “There is no convincing scientific evidence that human release of carbon dioxide, methane, or other greenhouse gases is causing or will, in the foreseeable future, cause catastrophic heating of the Earth’s atmosphere and disruption of the Earth’s climate. Moreover, there is substantial scientific evidence that increases in atmospheric carbon dioxide produce many beneficial effects upon the natural plant and animal environments of the Earth.” www.petitionproject.org/

BTW, it will be wise to ignore the fake news groups such as Snopes which claim that this is all bogus and they are not really genuine scientists. Groups like Snopes have far more activist agendas that they are pushing than these scientists and other concerned citizens.

What about the so-called “consensus” amongst scientists that we keep hearing about? One authority put it this way:

The “consensus” isn’t what it’s cracked up to be, as veteran meteorologist and former National Hurricane Center Director Neil Frank demonstrated in a major article for the Cornwall Alliance’s website. The real consensus is probably something more in the range of 50 to 60%, and it’s not a consensus that human emissions of CO2 are causing, or will cause, dangerous global warming, but simply that GAT [global average temperature] has risen over the past century and a half and that human activity has contributed to that warming.

Second, consensus isn’t a scientific value. It’s a political value. Want to know who won an election? Count votes. Want to know how much a doubling of atmospheric CO2 concentration will raise GAT? You don’t count votes, you do the hard empirical research. So anyone who starts appealing to consensus isn’t really talking science.

Third, many scientists who do embrace the dangerous-to-catastrophic anthropogenic warming idea probably do so largely because of group pressure, as Judith Curry discussed in a major paper on how the IPCC created consensus. cornwallalliance.org/2019/10/climate-change-and-the-battle-for-peoples-minds-part-2-of-interview-with-christian-renewal-magazine/

Indeed, the idea that the overwhelming majority of scientists support the notion of man-made climate change is simply incorrect. For example, many of you would have heard the oft-repeated claim that 97 per cent of scientists fully support the global warming gospel. That simply is not true. A short video on this is well worth watching: www.youtube.com/watch?v=SSrjAXK5pGw&fbclid=IwAR12Dcsiq3qmV063G-ysESLps1fUGEns0MHSKzA_hBYV7dFEyKIV97I4rrA

This is not the place to go into a full-orbed discussion about biblical Christianity and the environment. So just a few quick things will be said, along with mention of a few resources that are worth being aware of. As to Christian considerations about the environment, a few bullet points can be offered here:

-God has given us dominion over the earth (Genesis 1:28).
-God wants us to be good stewards of the world that he created.
-Because of the entrance of sin into the world, God has pronounced a curse upon the earth (Genesis 3:14-19). This in large measure explains what we are up against.
-Our environmental issues are at root a moral problem – due to human sin – and not something to be fully resolved simply by scientific, technological or economic means.
-While we must care for this planet, we are not to worship creation, but only the creator.
-Undue emphasis and exaggerated concern about the environment can easily lead to idolatry if we are not careful.
-We will one day be living in a new heavens and a new earth, so we must take care of what God has given us.
-Christians can and do differ on the science of climate change, so we need to listen carefully and prayerfully to what is being said, making up our minds based on the evidence, not on emotional alarmism.
-Biblically informed scientific evidence, rather than emotive outbursts from children or movie stars, should be what guides us here.
-Panic over an imminent end of the world or mass extinction is not compatible with the biblical truth that God is in control, and that the end of this world will not occur until God brings it about according to his own purposes and plans.
-Belief in God’s controlling hand over this world does not mean we are fatalists who do nothing. Christians are to responsibly use sensible means to help care for the environment.
-As always, there is an interplay of divine sovereignty and human responsibility that takes place here.

One Christian environmental scientist has recently warned about not getting entangled in climate idolatry. He reminds us that “in recent years, the church’s support for the climate movement seems to be morphing into a social justice issue that is void of sound Biblical doctrine.” He closes his piece with these words:

The presence of skeptics does not guarantee the immunity of the church from falling prey to the radical nature of climate environmentalism. A lot of my Christian friends remain uninformed about the details of the climate crisis movement and the players involved in it. If anything, they were surprised when I raised critical questions about Greta’s claims about “dying people” and “stolen future.”

The church’s position hangs in the balance. Though being neutral, the church is increasingly being exposed to climate crusaders who are imploring them to join the climate fight. With the Pope and Archbishop calling out their followers to embrace climate activism, it won’t be long before the Evangelical, Reformed, Baptist, and other denominations begin to get attracted to climate activism.

My final note to the church body: Resist idolatry and treat climate predictions with caution. Embrace empirical, evidence-based science. Don’t fall victim to the emotional appeals of school children, unelected leaders of the United Nations, and a few religious leaders who have no expertise in climate sciences and no understanding about its complexity. www.christianpost.com/voice/when-christians-get-entangled-in-climate-idolatry.html

There are now of course numerous Christian groups dedicated to care for the earth. One group worth mentioning is the Cornwall Alliance. Early in 2000 the Interfaith Council on Environmental Stewardship published The Cornwall Declaration on Environmental Stewardship. Soon after it was released, some 1,500 religious leaders and laymen from around the world endorsed it. That led to the creation of the Cornwall Alliance in 2005.

This in part explains their mission: “The Cornwall Alliance is a network of evangelical Christian scholars – mostly natural scientists, economists, policy experts, theologians, philosophers, and religious leaders – dedicated to educating the public and policymakers about Biblical earth stewardship.” Their site is here: cornwallalliance.org/

There are plenty of books written by Christians discussing the environment and our role in caring for it. I have pulled a handful of volumes from my shelves that offer a biblically balanced and helpful assessment of these issues.

19 Replies to “Christians, Climate and Catastrophism”