What are we to make of the apostles casting lots?

Trying to understand what this verse is saying is not difficult. The main issue that arises here is how contemporary Christians might apply what we find occurring here. The verse is about how the early church chose a successor for the traitor Judas. Included in this process is the casting of lots. 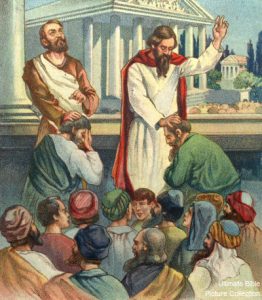 By way of context, the first half of Acts chapter 1 deals with the ascension of Jesus, while the second half – a full 15 verses – deals with the replacement of Judas. Two men are proffered, and one is finally selected. Verses 21-26 read as follows:

So one of the men who have accompanied us during all the time that the Lord Jesus went in and out among us, beginning from the baptism of John until the day when he was taken up from us—one of these men must become with us a witness to his resurrection.” And they put forward two, Joseph called Barsabbas, who was also called Justus, and Matthias. And they prayed and said, “You, Lord, who know the hearts of all, show which one of these two you have chosen to take the place in this ministry and apostleship from which Judas turned aside to go to his own place.” And they cast lots for them, and the lot fell on Matthias, and he was numbered with the eleven apostles.

The apostles prayed and sought the Lord, and along with the casting of lots, they found the right man for the job. But believers today might be wondering if the casting of lots is a suitable – and a godly – means by which they can determine the Lord’s will for their lives.

Various questions can arise here. Is it not a bit like magic, or superstition, or even gambling, to use such means today? Is it the same as flipping a coin, drawing straws, or throwing dice? Was it OK for the disciples 2000 years ago, but no longer an acceptable means now? Or is it a fully biblical thing to do, for all believers for all times?

A few things can be said in response. First, this method was used, or at least referred to, a number of times in Scripture – mainly in the Old Testament. If you simply search the ESV for the word “lots” you will get 23 results. You will get a further 19 results if you look up “the lot.”

Most of the references have to do with God’s people doing this. But sometimes pagans are doing it as well, such as when the sailors cast lots about who was responsible for the wild storm (Jonah 1:7): “And they said to one another, ‘Come, let us cast lots, that we may know on whose account this evil has come upon us.’ So they cast lots, and the lot fell on Jonah.”

And except for the Acts passage under question, the only other New Testament references to this practice concern the soldiers casting lots for the garments of Jesus at the crucifixion, as found in each of the four Gospels. Mark 15:24 for example says this: “And they crucified him and divided his garments among them, casting lots for them, to decide what each should take.”

Several of the more significant examples of this method being used in the OT include the following:

Leviticus 16:9 And Aaron shall present the goat on which the lot fell for the Lord and use it as a sin offering.

Joshua 18:8 So the men arose and went, and Joshua charged those who went to write the description of the land, saying, “Go up and down in the land and write a description and return to me. And I will cast lots for you here before the Lord in Shiloh.”

1 Samuel 14:40-42 Then he said to all Israel, “You shall be on one side, and I and Jonathan my son will be on the other side.” And the people said to Saul, “Do what seems good to you.” Therefore Saul said, “O Lord God of Israel, why have you not answered your servant this day? If this guilt is in me or in Jonathan my son, O Lord, God of Israel, give Urim. But if this guilt is in your people Israel, give Thummim.” And Jonathan and Saul were taken, but the people escaped. Then Saul said, “Cast the lot between me and my son Jonathan.” And Jonathan was taken.

Some additional clarification can be found in the book of Proverbs where we twice read about the lot:

Proverbs 16:33 The lot is cast into the lap, but its every decision is from the Lord.

Proverbs 18:18 The lot puts an end to quarrels and decides between powerful contenders.

All up, the biblical evidence suggests that this means was used on occasion, and was not something specifically forbidden or condemned by God. But let me turn my attention to the passage in Acts. Various commentators can be appealed to here.

If you want plenty of detail, the four-volume, 4500-page commentary by Craig Keener is the way to go. It will come as no surprise that he spends four pages on the issue of casting lots, mostly offering various bits of background information and detail.

While such info is helpful here, many have still wondered if the apostles were amiss in using the lot. Eckhard Schnabel, in his also sizable commentary on Acts (ZECNT, 2012 – 1200 pages), offers some helpful thoughts on this matter:

Whatever the precise method of casting lots was, Matthias was indicated. This casting of lots is often contrasted with the immediately following account of the coming of the Holy Spirit on the apostles and believers, who thus no longer needed this “mechanistic” manner of determining the will of God. Three factors should be considered, however. (1) The casting of lots was a divinely sanctioned manner of determining God’s will used for centuries in Israel. (2) Luke could have omitted the detail of the manner of Matthias’s selection if he had regarded casting lots as an inappropriate method for the church. (3) The presence of the Holy Spirit does not necessarily make decisions easier, unless there is a direct prophecy about what action should be taken. In other words, the Jerusalem believers did not act in unbelief but used an entirely proper procedure to ask the Lord to make his choice among the two candidates.

For a brief – but as usual, reliable – discussion of things, the quite useful 1990 commentary by John Stott offers a handy summation:

It is instructive to note the cluster of factors which contributed to the discovery of God’s will in this matter. First came the general leading of Scripture that a replacement should be made (16-21). Next, they used their common sense that if Judas’ substitute was to have the same apostolic ministry he must also have the same qualifications, including an eyewitness experience of Jesus and a personal appointment by him. This sound deductive reasoning led to the nomination of Joseph and Matthias. Thirdly, they prayed. For though Jesus had gone, he was still accessible to them by prayer and was acknowledged as having a knowledge of hearts which they lacked. Finally, they drew lots, by which they trusted Jesus to make his choice known. Leaving aside this fourthly factor, because the Spirit has now been given us, the remaining three (Scripture, common sense and prayer) constitute a wholesome combination through which God may be trusted to guide us today.

So, should Christians use lots – or the equivalent – today to determine God’s will? Three brief considerations can be offered here. First, when we read about the next two important selections being made in the book of Acts (as found in Acts 6 and 13), we read nothing of lots being employed, but just prayer as the main means used to make the choice.

Second, it should be pointed out that the full New Testament of course did not exist back then when they chose Matthias. Various books would soon enough be penned, and after a period of time the whole NT canon would be complete. With a finished Bible, Christians now have their primary source for decision-making.

Third, and as noted above, in the very next chapter of the book of Acts we read about how the Holy Spirit was poured out upon the believers. Given what I just shared by Stott about how today we as believers all have the Holy Spirit, we may well not need to rely on things like a coin toss – at least for important spiritual decisions.

With a full Bible and the fulness of the Spirit, that may be all we need as we seek God’s will. Sure, if you want to flip a coin to see which of the kids gets to sit in the front seat of the car, or gets the last can of Coke, then it is OK, and there is no danger of falling into magic or occultic practices.

But the mature believer will think carefully, study Scripture, pray a lot, and consult with other wise believers as he seeks the will of God on various major matters. For more on that see this two-part piece: billmuehlenberg.com/2011/05/20/on-finding-god%e2%80%99s-will-part-one/