Truth really is our primary weapon:

Let me begin by mentioning a dream I had last night. It seems I and a few others were under attack by some bad guys. They were seeking to break into our property, and we were trying to defend it. The problem was, the bad guys had weapons, but we did not. It was not a fair fight I said. 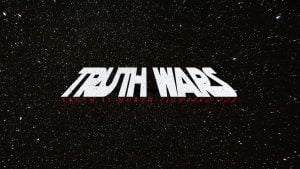 Two thoughts popped into my head upon awakening. One, this is getting to be the case in the US where lefties and Democrats are pushing to disband the police, defund the police, or disarm the police. That sure ain’t gonna work well. See more on that here: billmuehlenberg.com/2020/06/10/the-radical-left-and-the-war-on-police/

Two – and as is often the case – I thought about any spiritual application that might be found. So I thought of the Christian’s arsenal. The obvious passage on this is Ephesians 6:10-20 which speaks of the whole armour of God. As is well known, all the armour is defensive in nature, with just one offensive weapon: “the sword of the Spirit, which is the word of God.”

Of course Jesus made it clear that the Word of God is truth. As we read in John 17:17, “your word is truth”. So our primary offensive weapon is truth. While biblical truth is the main example of this, the Christian believes that all truth is God’s truth. So whether we talk about mathematical truth or Scriptural truth, we need to make use of it.

And – to revert to my dream – if we are under attack, we must have the truth and we must use it. Great Christians have always known this. As Alexander Solzhenitsyn said in 1970 in his Nobel Prize in Literature lecture, quoting an old Russian proverb: “One word of truth shall outweigh the whole world.”

Many more quotes from many more individuals could be offered here, but let me deal with just one important Christian author. He is a prolific writer and has often centred his thoughts on the issue of truth. I refer to the great Christian apologist and thinker Os Guinness.

The 79-year-old English writer and commentator has penned dozens of very important volumes over the past half century. Many of us first became aware of him in his association with Francis Schaeffer, and the publication of his superb 1973 book, The Dust of Death.

Here I want to draw upon just one of his key works. Twenty years ago he released Time for Truth (Baker, 2000). Although rather brief (just 125 pages), it is packed with powerful commentary and terrific insights. He especially takes on the postmodern war on truth, and lays out the vital importance of Christian truth.

In his introduction he reminds us of the practical relevance of truth: “Truth matters supremely because in the end, without truth there is no freedom. Truth, in fact, is not only essential to freedom; it is freedom, and the only way to a free life lies in becoming a person of truth and learning to live in truth. Living in truth is the secret of living free.”

In Ch. 4 he spends some time in defining the biblical notion of truth. He writes: “In the biblical view, truth is that which is ultimately, finally, and absolutely real, or the ‘way it is,’ and therefore is utterly trustworthy and dependable, being grounded in God’s own reality and truthfulness. . . . Belief in something doesn’t make it true; only truth makes a belief true. But without truth, a belief may be only speculation plus sincerity.”

The Christian faith is not true because it works; it works because it is true. It is not true because we experience it; we experience it – deeply and gloriously – because it is true. It is not simply ‘true for us’; it is true for any who seek in order to find, because truth is true even if nobody believes it and falsehood is false even if everybody believes it. That is why truth does not yield to opinion, fashion, numbers, office, or sincerity – it is simply true and that’s the end of it.

In stark contrast is the postmodern take on things. Power relationships are the focus there. Says Guinness:

The promise of postmodernism at first sight is a brave new world of freedom. ‘Truth is dead; knowledge is power,” the exuberant cheerleaders tell us. We must all therefore debunk the knowledge-claims confronting us and reach for the prize – freedom from the dominations constraining us. What could be simpler and more appealing? There is only one snag. If truth is dead, right and wrong are neither, and all that remains is the will to power, then the conclusion is simple: Might makes right. Logic is only a power conspiracy. Victory goes to the strong and the weak go to the wall.

Postmodernism of course grew out of, and was a reaction to, modernism. This earlier stance is also problematic for the Christian. Modernism got some things right (truth exists, is objective, etc) but it got things quite wrong (man is the sole arbiter of truth, and no outside revelation is needed). Guinness says this:

The Jewish and Christian view of truth flies directly in the face of the modern view. . . . Expressed most powerfully in the Enlightenment, the modern view of truth made two claims: First, that truth is objective, certain, and knowable by the unaided intellect without the interference of personal distortions; and second, that the freer the thinker, the more he or she is committed to the fearless pursuit of truth at any cost. The biblical position rejects both these claims as pretentious and false. As human beings we are by nature truth-seekers; as fallen human beings we are also by nature truth-twisters. And a proper account of truth in the human project must do justice to both.

Those last two lines are crucial. Yes, because we are made in God’s image, we have a longing for truth. But because of the Fall, we are all sinners who run from the truth, or twist the truth for our own ends. So we both seek the truth and yet hide from the truth, or distort it.

But truth is the weapon believers have, and we need to make full use of it. Whether it is fighting in the culture wars, or dealing with other belief systems, or seeking that which is morally right, we must be people of truth. We must believe it, affirm it, and use it to take on the lies of the surrounding culture. As Guinness writes:

Postmodern forms of relativism, skepticism, cynicism, and the like may appear to shatter traditional convictions to smithereens. But fears that such views are beyond argument are groundless. For no human being lives outside the reality common to us all. Whatever people may say the world is or who they are, it is what it is and they are who they are. Again, no argument is unarguable, but there are thoughts that can be thought but not lived. When all is said and done, reality always has the last word. The truth will always out. Standing up to falsehood, lies, and crazy ideas is never an easy task, but … it is far easier than the hardest task of all, becoming people of truth ourselves.

The last chapter of the book speaks to this very matter. One final quote: “We face the challenge of practicing the truth before God. To become true we must live bathed in the full floodlight of One who is true. Only when we realize that all our pretenses, evasions, and fig leaves are useless can we achieve the honesty and humility needed for change. As Abraham Heschel used to say, going far beyond Socrates, ‘An untransformed life is not worth living’.”

Being people of truth, proclaiming the truth, and practising the truth. That is our offensive weaponry which we need to fully utilise. In these very dark days this is all the more important to understand and to implement.