Straight thinking on the calls to disband the police:

OK, I confess: back in my wild youth you would often hear me shouting, “Off the pigs!” I and my radical-left counter-culture friends hated all forms of authority, and the police were on the top of the list. Of course I have since then had a change of heart and mind. But we know that radical leftist groups still detest the police.

With the recent George Floyd episode, the calls are escalating for the police to be disbanded, or at least heavily defunded. The left is using this as their latest excuse to continue their war on the police. Anyone even remotely familiar with the left knows what a long-standing battle this is. 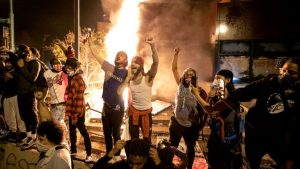 And it must be pointed out once again that yes, police sometimes go bad. No one I know has said there is no misuse or abuse of police powers. But in a fallen world, there are those who abuse their power in every single institution, be it the media, the courts, education, the churches, health care, and so on. Yet I am not hearing calls for all those institutions to be disbanded or shut down.

I have already written on this matter before, covering both political and social aspects, as well as biblical and theological matters: billmuehlenberg.com/2020/06/05/on-eliminating-the-police/

But more needs to be said. What are these calls really all about? The radical left has regularly made it clear just what they mean when they talk about scaling back the police or cutting back their funding. While some hardcore anarchists want no state and no police at all, most on the left do NOT envisage this. They do not intend that there be no powers in place.

The left is always about power and control. So they will have their own authorities in place, be they secret police, thought police, militias, or various forms of Statist forces who will enforce their hard left ideology. They love power, but they want it on their own terms.

They do not want neutral police forces respecting the rule of law that applies to everyone. They want ideological police forces that are enforcers of their coercive utopianism. The history of the left makes this clear. The Bolsheviks for example attacked existing police forces just prior to the revolution in Russia. And once in power they established their own secret police.

The Cheka was formed in 1917 and given powers to arrest suspects, conduct summary trials, lock up political prisoners, and execute ‘enemies of the State’. Although disbanded in 1922, it of course morphed into the OGPU, the NKVD, and the KGB.

Make no mistake: the radical leftists calling for an end to police or their defunding are not seeking a police-less State. They just want their police in power, to push their hard-left PC agendas, and keep all recalcitrants in check. That is their goal.

Indeed, we simply need to ask ourselves who is pushing all this. Al Perrotta has just penned an important piece looking at this in detail. He writes, in part:

So What is Behind the “Defund the Police” Movement?

So if defunding the police makes crime rise and police more likely to use excessive force, why be for it? It’s certainly not about valuing black lives. “Defund the Police” is history repeating itself. (Just like Antifa is a repeat of Hitler’s Brown Shirts.) The Marxist revolutionaries behind the Weather Underground similarly called for an end to police. Except for certain Black Lives Matter members in unscripted moments, we’re not hearing the police called “pigs,” but the idea is the same.

Former FBI deputy counterterror director Terry Turchie told Laura Ingraham Friday night that Antifa and the “Defund the Police” crowd are running the old radical playbook, the Weather Underground’s Prairie Fire. Prairie Fire listed six main points to bring down the U.S. government. One point was to push “police racism.” Said Turchie, “It is the issue that communist societies use to literally tear apart Americans and to be divisive.”

Counter-terrorism expert John Guandolo echoed this on The Kyle Olson Show.He exposed the “coordinated effort” behind the riots and the “Marxist-communist” origins of Black Lives Matter, Inc. But don’t believe them. Project Veritas has just released another Antifa undercover video. Straight from a soldier’s mouth: “We believe in the complete abolition of the system itself, including police.” stream.org/defund-the-police-or-destablize-america/

The simple truth is this: even if the regular police were allowed to stay, the cutbacks in funding and police powers would mean only one thing: crime would increase as the police decrease. This is empirically verifiable, as well as the stuff of common sense. Consider just one study on this: a 70-page Princeton University study from 2018 offered this clear conclusion: “More Cops, Less Crime.” www.princeton.edu/~smello/papers/cops.pdf

And we can look to other places to see how flawed this policy is. Mexico is in all sorts of strife after it disbanded police in many areas and replaced them with local self-defence militias. Crime and corruption certainly did not end. As John Daniel Davidson reports:

Despite the insistence of the protesters, getting rid of law enforcement won’t usher in a more just or equitable order. But it will invite new arrangements for security, as it did in Mexico. These arrangements, however well-intentioned, will fall prey to the same corruption and unaccountability as the forces they replace, especially if the underlying causes of societal decay are left to fester. thefederalist.com/2020/06/09/if-you-want-to-know-what-disbanding-the-police-looks-like-look-at-mexico/

Or consider the situation in New York, where we now have Muslims forming their own ‘community patrol’ groups throughout some areas. Hmm, what could possibly go wrong? Indeed, many are quite worried about all this: www.nytimes.com/2019/02/03/nyregion/muslim-community-patrol-brooklyn.html?smid=tw-share

Anyone with brains not turned to mush by leftist propaganda knows that this will not end well. Consider a meme currently making the rounds on the social media. A picture of a defunded police dispatch call centre is shown, with a distraught caller ringing the emergency number 911 to report a home invasion. The police at the other end of the line reply, “Stay calm, we are sending our thoughts and prayers.”

Or as the satire site Babylon Bee puts it:

Congressional Democrats have announced a proposal to abolish the police and replace them all with traveling bands of hippies singing John Lennon’s classic song “Imagine.” The police forces will arrive at the scene of a crime, pull out their djembes and guitars, and start singing beautiful lines like, “Imagine there’s no heaven / It’s easy if you try.”

Criminals are expected to begin weeping as soon as they see the peace, love, and tolerance displayed by the hippies. “Our early research has been very promising,” said Rayne Windflower, head of hippy research in the city of Minneapolis. “The science seems to indicate that as soon as you approach someone who is breaking the law and start singing ‘Imagine all the people living for today’ they drop their deadly weapon, return all the goods they have stolen, and join us in a dancing circle to smoke some weed.” babylonbee.com/news/democrats-propose-replacing-all-police-with-traveling-bands-of-hippies-singing-imagine

But in the meantime, all the celebs and politicians and elites calling for the end to, or reduction of, the police all happen to have their own small private security armies in place. Yes, they have armed guards, armed security, armed forces keeping them safe and secure inside their walled compounds. But they want you – the ordinary citizen – to have no such protections and no such safety.

As one American sheriff has put it:

Defunding police is yet another proposed solution based on a false narrative that will only make life worse for blacks in America, contends the former, four-time elected sheriff of multi-racial Milwaukee County. “The biggest losers in all this will be poor black people in crime-ridden ghettos. The police are the only thing standing between them and violent criminal predators,” said David Clarke in an interview Monday with WND.

“You’d have to loathe black people to do that to them.” Clarke, 63, said the proposal advocated by the Black Lives Matter movement, which has quickly gained traction among Democratic leaders in cities such as Los Angeles, New York and Minneapolis, “isn’t a serious public policy proposal, it’s buffoonery.” www.wnd.com/2020/06/sheriff-david-clarke-loathe-black-people-defund-police/

Or as Herman Cain has written:

In an op-ed for the Washington Post last week, writer Alyssa Rosenberg proposed that all TV cop shows be canceled. This is how far we’ve gone culturally toward the idea that police officers – by their very nature – are the enemy of civilized society.

Of course, police officers are essential to the preservation of civilized society. It’s astonishing that the same people who have been saying for years that the public doesn’t need guns, because the police will protect them from crime, now wants the police done away with. Anyone who doesn’t understand this should check out the 2013 film The Purge, which depicts a 24-hour period in which all crime – including murder – is legal. This is essentially what the disband-the-police people are asking for. hermancain.com/stop-affirming-idea-police-officers-enemy/

No thinking person, and certainly no biblical Christian, can go along with any of this madness. Should there be regular reviews of the police and their policies and practices, reforms where needed, and changes prudently brought about? Of course. All institutions need to be routinely assessed and monitored, in the hopes of continuous improvement.

6 Replies to “The Radical Left and the War on Police”