Now the progressives are calling for the end of the police:

We know that various leftist hate groups have made it quite clear that they want to eliminate the police – and quite literally. As their signs so often read, “The only good cop is a dead cop”. But that is not what I wish to discuss here. I instead want to speak to the growing calls being made by various leftist politicians and leaders to actually defund, if not disband, the police.

Yes, you read that right. Increasingly we are getting these progressives telling us we don’t need the police, or we have too many police, or there is a better way to run a society than with police. Mind-boggling I know, but there it is. Let me preface what I want to say about this by making the following factual observations: 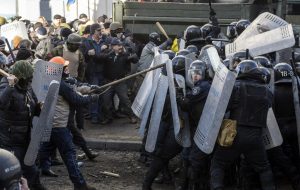 -In almost every American city now in flames, we have had Democrats in charge -– either as governors or mayors or both.

-In almost every jurisdiction where we have had draconian Covid lockdown measures in place, with churches closed and weddings and funerals banned or restricted, we had Democrats in charge.

-In almost every jurisdiction where prisons were emptied of prisoners – to keep them safe from Covid – we had Democrats in charge.

-In almost every place where the rioting, looting and arson attacks were basically given a green light with no or little police intervention – at least early on – we had Democrats in charge.

-In almost every place where we find the most hatred of, and opposition to, US President Donald Trump, we have Democrats in charge.

-And now, in every place where we hear these calls for the police to be disbanded or greatly curtailed, we have Democrats in charge.

Is it just me, or is there some pattern emerging here? The truth is, in an election year, with leftist hatred and rage against Trump at an all-time high, they are willing to do almost anything to see him turfed out of office – hopefully even well before the November elections.

The economy-destroying measures caused by the Covid lockdowns is one way to try to bring this about. And mass protests with wanton destruction and mayhem is another way to bring it about. And couple all this with these utterly idiotic and reckless calls to get rid of the police, and we have the perfect storm brewing for the leftists.

Of course they have always been about power and control. That is what they lust after more than anything else. And what better way to achieve this than to spread rioting and terror throughout our cities, all the while seeking to get rid of the police. Anarchy results, and the leftist politicians who are drunk on power can order ever more draconian lockdowns and take away even more freedoms from the people.

Hmm, it seems like it is all going according to plan. Oh, and just in case you think I am making this up about getting rid of the police, let me offer just a few recent examples of this being called for. Here is what they are seeking to do in LA:

Los Angeles officials have proposed sweeping cuts to the city’s annual budget and police department while calling for that money to be invested in marginalized communities after nationwide protests over the death of George Floyd. Mayor Eric Garcetti announced at a press conference on Wednesday night the city would “identify $250 million in cuts so we can invest in jobs, in health, in education and in healing” following demands from the Black Lives Matter movement and other activist groups to divest funding from the Los Angeles Police Department. www.independent.co.uk/news/world/americas/los-angeles-police-department-budget-cuts-defund-lapd-eric-garcetti-press-conference-a9549001.html#gsc.tab=0

And related to all this, check out this virtue-signalling lunacy from toy-maker giant LEGO:

In the aftermath of protests spurred by the killing of George Floyd, LEGO has paused advertising for products including police stations, city police vests and the White House. The move reflects a recent trend among companies expected by the consumer to have a voice and take a stand on social issues. “We stand with the black community against racism and inequality,” Amanda Madore, senior brand relations manager for LEGO, said in a statement to USA TODAY. The company did not pull the products from sale — just the ads for more than 30 products, according to CNBC. “Our intention was to temporarily pause all digital advertising in response to events in the U.S.,” Madore confirmed. www.usatoday.com/story/money/2020/06/04/lego-police-white-house-product-ads-us-tensions/3148197001/

Lastly, consider this shocker from Minneapolis.

Ten days after the police killing of George Floyd in Minneapolis, Minnesota, several members of the Minneapolis City Council are seeking to get rid of the police department — permanently. Ward 3 Councilmember Steve Fletcher announced the effort on social media, saying that he and other councilmembers are looking to “disband” the Minneapolis Police Department, calling it “ungovernable” and “irredeemably beyond reform.” Without any historical precedent, there’s no easy path forward. “Several of us on the council are working on finding out what it would take to disband the MPD and start fresh with a community-oriented, non-violent public safety and outreach capacity,” Fletcher tweeted. www.insider.com/minneapolis-city-council-members-look-to-disband-police-department-2020-6

Wow! Let’s get rid of the police and just have a bunch of tree-hugging hippies passing out flowers and loving everybody into a safe and secure community! Nirvana! Heaven on earth! Woodstock revisited! Utopia now!

Hmm, just what drugs are these folks taking? But let me see if I can get this all straight:

-Democrat lefties have released all sorts of violent criminals onto the streets of American cities.

-Democrat lefties want open borders where anyone can just waltz right into America, even if they are hardened criminals and drug-runners.

-Democrat lefties want to see as many mass protests in American cities as possible, regardless of how violent, destructive and anarchistic they may become.

-Democrat lefties still don’t want churches and synagogues fully opened, but they are happy to see tens of thousands of marchers on the streets, mobbing together as they scream about police tyranny.

-Democrat lefties want to defund if not disband the police.

-Democrat lefties want to gain even more power for themselves.

Hey, what could go wrong?

Christianity and the police

Let me also offer a biblical take on all this. Hopefully all level-headed citizens will see the folly and madness in these calls for the elimination of the police. But how might a Christian think about this? Let me offer a few brief thoughts. First, the Bible does not speak too much about policing, but we do have some general truths to run with.

As I have stated repeatedly, getting the biblical balance right is essential in so many of our current debates. That is fully true here as well. The biblical Christian rejects radical libertarianism, especially anarchism. God created the state and there is a place for it.

But biblical Christians also reject runaway statism where the government is seen as being able to do no wrong. We do not believe the state should have unchecked power and control, with the populace being mere sheep in total and unquestioning submission.

One of the core biblical statements on the role of state is found in Romans 13:1-7. Verse 4 informs us that the governing authority “is God’s servant for your good. But if you do wrong, be afraid, for he does not bear the sword in vain. For he is the servant of God, an avenger who carries out God’s wrath on the wrongdoer.”

The use of the sword makes it absolutely clear that the use of force (and force is not the same as violence) is part of the God-given role of government. Yes, it may mean, even more, such as the right to capital punishment, as I discuss here: billmuehlenberg.com/2015/02/13/the-sword-of-romans-13/

But at the very least it certainly means that the use of force to maintain order and combat evil is part of the divine mandate for the state. And the state exists because we live in a fallen world. Only old hippies whose minds have turned to mush would think that we can live without the state and some sort of police force.

The biblical doctrine of sin and of human depravity means Christians do NOT believe in some nifty utopia where everyone just gets along and sings kumbaya all day. We know that evil abounds in the human heart, and to maintain order and justice in a fallen world, we need things like the police to keep evil in check – at least in its outward expressions.

So these calls for no police or far fewer police are not only ludicrous in the extreme, but they are patently unbiblical as well. But leave it to coercive utopian leftists and Democrats to come up with nonsense like this.

14 Replies to “On Eliminating the Police”