My topic here involves how we are to understand the sword – and the state’s use of it – as found in Paul’s discussion of government authority in Romans 13:1-7. Many scholars understand this to be a reference to the death penalty, and that is the case I seek to make here.

I should first point out that the Bible makes it clear that God has ordained the death penalty (even before the giving of the Mosaic law), and it is not rescinded in the New Testament. But read this two-part article for much more detail on this:
https://billmuehlenberg.com/2007/10/11/on-capital-punishment-part-1/
https://billmuehlenberg.com/2007/10/12/on-capital-punishment-part-2/

The passage in Romans speaks about the reason why God has ordained human authorities to rule in a fallen world, and the first five verses provide the context for the verse about the sword (v. 4):

Let everyone be subject to the governing authorities, for there is no authority except that which God has established. The authorities that exist have been established by God. Consequently, whoever rebels against the authority is rebelling against what God has instituted, and those who do so will bring judgment on themselves. For rulers hold no terror for those who do right, but for those who do wrong. Do you want to be free from fear of the one in authority? Then do what is right and you will be commended. For the one in authority is God’s servant for your good. But if you do wrong, be afraid, for rulers do not bear the sword for no reason. They are God’s servants, agents of wrath to bring punishment on the wrongdoer. Therefore, it is necessary to submit to the authorities, not only because of possible punishment but also as a matter of conscience. 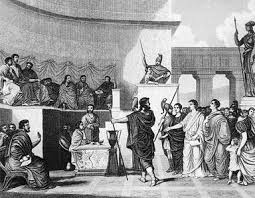 The question of course is this: what exactly is meant by ‘bearing the sword’? At the very least, this phrase means that the magistrate has the right to use force, to inflict punishment. But can it also refer to capital punishment? And/or does this phrase specifically refer to it?

There are various ways we can get some help on this. I will simply confine myself to what some of the better commentaries are saying about the matter. That admittedly may narrow things down just a bit, but the 30 or so commentaries I have on the book of Romans are some of the better ones around, and they can offer much help in this regard.

As to what this phrase actually entails, opinions differ on this, with some saying we just cannot know for sure, while others are quite happy to suggest that this indeed refers to the right of the state to inflict death on wrongdoers for certain crimes.

Of the commentaries I own, those which don’t even raise the issue as to whether it refers to the death penalty or not include N. T. Wright (NIB, 2002 – although he alludes to it in his popular level Paul For Everyone volume), and F. F. Bruce in his 1963 TNTC commentary.

The majority of commentators do believe that capital punishment is in view here – in part at least if not in total. Those who say it is possible but unlikely or at least uncertain include Ben Witherington (2004), Leon Morris (PNTC, 1988), the Catholic commentator Joseph Fitzmyer (AB, 1993), and Franz Leenhardt (1961).

Hardly anyone offers an unqualified ‘no’ on this, with those who think it is not capital punishment being at least open to the counter arguments. Let me begin with one who is not fully convinced either way. In his 1996 NICNT commentary Douglas Moo says this:

“Probably, then, Paul uses the phrase to refer generally to the right of the government to punish those who violate its laws.” In a footnote however he continues, “The phrase does not, then, directly refer to the infliction of the death penalty; but in the context of first-century Rome, and against the OT background (Gen. 9:4-6), Paul would clearly include the death penalty in the state’s panoply of punishments for wrongdoing.”

But as I say, most commentators (at least of those whose commentaries I own) believe that this does indeed refer to the death penalty. Among these are Colin Kruse. His 2012 PNTC commentary examines some of the various interpretations offered over the years, then comes to this conclusion:

John Stott is another who believes the death penalty is in view here. In his 1994 BST commentary he writes: “Since the word for ‘sword’ (machaira) has occurred earlier in the letter to indicate death (8:35), and since it was used of execution (eg., Acts 12:2; Rev 13:10), it seems clear that Paul means it here as a symbol of execution.”

It would not be necessary to suppose that the wielding of the sword contemplates the infliction of the death penalty exclusively. It can be wielded to instil the terror of that punishment which it can inflict. It can be wielded to execute punishment that falls short of death. But to exclude the right of the death penalty when the nature of the crime calls for such is totally contrary to that which the sword signifies and executes. We need appeal to no more than New Testament usage to establish this reference. The sword is so frequently associated with death as the instrument of execution (cf. Matt. 26:52; Luke 21:24; Acts 12:2; 16:27; Heb. 11:34, 37; Rev. 13:10) that to exclude its use for this purpose in this instance would be so arbitrary as to bear upon its face prejudice contrary to the evidence.

And Thomas Schreiner in his 1998 BECNT commentary canvases the options and then says this:

The reference instead is to the broader judicial function of the state, particularly its right to deprive of life those who had committed crimes worthy of death. Paul would not have flinched in endorsing the right of ruling authorities to practice capital punishment since Gen. 9:6 supports it by appealing to the fact that human beings are made in God’s image. Precisely because human beings are so valuable as God’s image bearers, it follows that one who intentionally takes the life of another should be deprived of his or her own. The government’s function is to inflict wrath, to vindicate justice.

Of course how all this is teased out in terms of contemporary Christian ethics is the subject of much more discussion and debate. Let me close by simply appealing to two other NT episodes concerning the death penalty. Twice we find people up against the death penalty, and in neither case do they deny its validity.

The first concerns Jesus before the Roman governor Pilate. In John 19:10-11 we read: “’Do you refuse to speak to me?’ Pilate said. ‘Don’t you realize I have power either to free you or to crucify you?’ Jesus answered, ‘You would have no power over me if it were not given to you from above. Therefore the one who handed me over to you is guilty of a greater sin’.”

It is interesting that Jesus does not say that Pilate is wrong here, but he instead simply reminds him where his power has come from, including his God-ordained power to take human life.

The second episode has to do with Paul before Festus. We find this in Acts 25:11: “If, however, I am guilty of doing anything deserving death, I do not refuse to die. But if the charges brought against me by these Jews are not true, no one has the right to hand me over to them. I appeal to Caesar!”

Again, we do not find Paul arguing about the wrongness of the death penalty. He not only fully accepts it, but is willing to be put to death if he is indeed guilty of a capital crime.

But for more biblical and theological detail on all this, see the two-part article I link to above. The case I have simply sought to make here is that the phrase ‘bear the sword’ may well refer to the death penalty. That does not of course settle all the other aspects of debate over capital punishment, but it adds one more bit of information to the overall discussion.