Remember how the world was outraged when the Taliban blew up and destroyed two large 1500-year-old Buddha statues in Afghanistan in 2001? ‘What barbarians’ everyone thought. ‘This great cultural, artistic and historical artefact has been destroyed by madmen and lunatics.’

Well, the barbarians are still with us. But now it is not the Taliban but hate-filled leftists who are destroying statues and banning works of art and literature and film that are deemed to be not politically correct. And with that they are working overtime to rewrite history. Just about anything associated with white, Western culture is now being targeted. 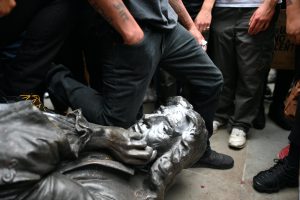 Especially after the George Floyd episode, the leftists are screaming racism and are denouncing anything that is part of our Western heritage. These folks are the New Taliban. They have the same fundamental worldview, involving a hatred of the West and a desire to destroy everything that is a part of it.

Examples of this are now legion. Let me begin with Australia. Just one case will suffice. Consider this news item:

Thousands of people have signed a petition demanding the removal of a statue of Australia’s first prime minister, Sir Edmund Barton, from a traditional burial site in NSW. Port Macquarie woman Arlene Mehan, of the Mid North Coast’s Birpai people, is leading the campaign to force Port Macquarie-Hastings Council to move the statue from Town Green park… “As a Birpai woman, I’m looking for something to dismantle in the local community that represents racism and the statue does,” she said. www.abc.net.au/news/2020-06-11/push-to-remove-statue-of-australias-first-pm/12340492

This has been happening in America for some time now. Here are just two recent examples – both from Virginia:

Virginia Gov. Ralph Northam has both “the authority and the moral obligation” to remove a massive statue of Confederate Gen. Robert E. Lee in Richmond, Attorney General Mark Herring’s office said in a court filing Wednesday. Herring will defend the governor’s decision in a lawsuit filed by a Virginia resident and “ensure the removal of this divisive relic,” the filing said, calling the statue a “piece of state property freighted with exclusionary meaning to broad swaths of Virginians.” globalnews.ca/news/7052031/virginia-attorney-general-defend-robert-e-lee-removal/

The Christopher Columbus statue was torn down by protesters in downtown Richmond Tuesday night. It happened around 9 p.m. at Byrd park, following a peaceful demonstration outside of the statue in honor of indigenous people. Shortly afterward, the statue was ripped from its foundation, spray painted, then set on fire. After that, the statue ended up in the lake. www.nbc12.com/2020/06/09/christopher-columbus-statue-torn-down-thrown-lake-by-protesters/

And in the UK things are really getting out of hand. For example, one of the greatest opponents of fascism ever, Winston Churchill, is being targeted by – you guessed it – antifascists:

Winston Churchill’s memorial statue has been desecrated and daubed with the word “racist” during the Black Lives Matter protest in London. The British war hero’s statue in London’s Parliament Square has been defaced with Churchill crossed out with black marker pen and the words “is a racist” underneath. Protesters have also pinned a poster to the memorial with the words “Black Lives Matter”. Shocking pictures also show protestors climbing atop the statue to protest. This is the second day the statue has been defaced after protesters graffitied it with neon green writing during Saturday’s rally. www.express.co.uk/news/uk/1292632/Winston-churchill-statue-london-protests-black-lives-matter

And numerous statues also deemed to be racists are now being taken down, or are being targeted for removal:

Black Lives Matter activists are calling for the removal of 60 statues of slave owners and racists across Britain. Top of their target list is the statue of Cecil Rhodes and petitions also exist to remove the statue of slave-trading West India Docks founder Robert Milligan, and the statue of former Home Secretary Henry Dundas who delayed the abolition of slavery and that stands atop a column in Edinburgh. But on a website called Topple The Racists, set up by Black Lives Matter activists, members are invited to propose other statues that should be torn down across Britain. There, a wide range of figures from Britain’s colonial past are being proposed for destruction. www.dailymail.co.uk/news/article-8401857/Racists-heroes-Black-Lives-Matter-want-topple-statues-famous-Britons-slavery-links.html

A statue of 18th century British slave owner Robert Milligan was removed from outside the Museum of London Docklands Tuesday afternoon. The incident came shortly after toppling of a statue of another slave trader, Edward Colston, in Bristol on Sunday.

The move came as the reaction to statues of such individuals who had been involved in the slave trade or owned slaves is mounting parallel with Black Lives Matter protests sparked by the killing of George Floyd in the U.S. The Canal and River Trust said earlier that it was working toward removing the statue “as soon as possible.” The action followed a decision by London Mayor Sadiq Khan to review London’s landmarks “to reflect the city’s diversity.”

Tower Hamlets councilor Ehtasham Haque recently put up an online petition for the removal of the statue and received more than 1,000 signatures within the first 24 hours. Speaking to Anadolu Agency (AA) as the statue was being pulled down, Haque said he was “relieved.” He said the removal of the statue was “our contribution to the campaign for justice to our brother George Floyd … We have removed the statue of a slaver, Robert Milligan, who used to own 526 slaves when he died in 1809.” www.dailysabah.com/world/europe/another-slave-owner-statue-pulled-down-in-uk

Um, Khan is a Muslim. As such he is devoted to his religious hero Muhammad. Wakey, wakey: Muhammad was a slave owner. As WikiIslam proudly puts it:

Under Islamic laws, slavery is explicitly permitted. As Saudi Sheikh Saleh Al-Fawzan, a member of the Senior Council of Clerics had said in 2003, those who argue that slavery is abolished are “ignorant, not scholars. They are merely writers. Whoever says such things is an infidel.” Muhammad himself was a slaver. He not only owned many male and female slaves, but he also sold, captured, and had sex with his slaves. wikiislam.net/wiki/Islamic_Law#Slavery

Will Khan step down, or will he apologise for his religious beliefs? Will all the outraged protestors be circling his home, screaming for him to get on his knees, or else they will burn his house down? While we may not have statues of Muhammad to pull down and destroy, there are some other options. As Douglas Murray said in a tweet: “Perhaps the Woke mob can insist that anybody named after him just changes their name? That should do it.”

And while we are at it, when will we start tearing down and destroying other statues of leftist icons? For example, eugenicist Margaret Sanger who helped to set up the world’s largest abortion group, Planned Parenthood, was a racist with close ties to groups like the KKK. As she wrote, “Eugenics is … the most adequate and thorough avenue to the solution of racial, political and social problems.” But I won’t hold my breath on seeing her statues smashed by the leftist mobs.

And it is not just monuments and statues but almost everything that is deemed to be politically incorrect and racist. Now they are banning films like Gone With the Wind: www.breitbart.com/politics/2020/06/10/gone-with-the-wind-number-one-best-seller-at-amazon-after-hbo-blacklist/

Classic television shows are also being censored by our New Taliban: www.spectator.co.uk/article/the-madness-of-censoring-shows-like-little-britain

Brendan O’Neill has recently written about this “neo-Maoist war on the past”. He says this:

Britain is in the throes of a Cultural Revolution. Statues are being tumbled, past art erased, people cancelled. Wide-eyed Woke Guards, heirs to Maoist-style intolerance, are compiling lists of monuments to target and individuals to humiliate. They are remorseless. Nothing old that runs counter to their newthink can be tolerated. Tear it all down.

How did this happen so fast? How did protests over the police killing of a black man in Minneapolis become a PC war on statues, street names, art and people judged to be suffering from wrongthink? Partly, it speaks to the colonisation of public life by the narrow, eccentric concerns of the over-educated middle classes and ostensibly progressive bourgeoisie. That millions of people, white and black, are losing their jobs as a result of the lockdown and yet left-wing debate is dominated by the question of which 200-year-old statue to tear down next is testament to the left’s replacement of class and economic questions by virtue-signalling and an obsession with woke propriety.

More fundamentally, this is all a continuation of what had already been happening. We live in an era of intolerance and unreason. From higher education to the political sphere, from the new media to activist circles, PC censoriousness is rampant. New orthodoxies emerge with extraordinary speed and are enforced with rigour. Say the wrong thing on gender or race and you’re out. Question the gospel of genderfluidity, wonder out loud if ‘white privilege’ is really a thing, deny the truth of the End of Days foretold by climate change – you do all these things at your peril. What we are witnessing right now is something that is actually disgustingly cynical: the exploitation of the anger over George Floyd’s death to bolster the zealous crusade to institutionalise PC orthodoxies that would have been as alien to Floyd as they are to most normal people.

Let’s call it what it is. It’s re-education. The Woke Guards might use more flowery language than the Red Guards, talking about ‘a radical reorientation of our consciousness’ (in the words of much-celebrated author Ibram Kendi). But it amounts to the same enforcement of orthodoxy that we have seen in history. It’s time to stand up to this Cultural Revolution. This isn’t about defending slave traders, which is the latest slur that the enforcers of woke orthodoxy throw at their critics. It’s about defending reason, freedom, the right to dissent, and the pluralism and complexity of the public square. www.spiked-online.com/2020/06/10/this-has-become-a-neo-maoist-war-on-the-past/

Quite so. This is a war on history and on Western civilisation. And what we have is a New Taliban that is fully behind it all. Today’s leftists are simply emulating their own past heroes – heroes with plenty of statues still around. The main one, Karl Marx, said, this: “The first battlefield is to rewrite history.” And he also said, “Take away the heritage of a people and they are easily persuaded.”

That is exactly what all this New Taliban cultural cleansing is about.

36 Replies to “Leftist Hate, Hypocrisy and the Rewriting of History”