There is much more to being a Christian than simply claiming to be one. All sorts of folks think they are a Christian, or pretend to be a Christian, but they are nothing of the sort. We see this in various areas, but it is certainly found in radical leftists who like to add the adjective “Christian” to their latest campaigns and agenda items.

Progressive Christians are a case in point. They use God words but know little about the real God of the Bible. Instead they simply push all the usual left-wing agendas, disguising them in religious language. See more on this here: billmuehlenberg.com/2011/01/23/progressive-christianity/

And plenty of lefty trendies also like to use the designation Christian when it suits them. Plenty of the social justice warriors for example fit the bill here. I have these folks attacking fairly often, claiming I am the one who is not a Christian, because I do not go along with their hyper-left agendas and beliefs. 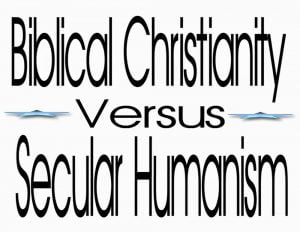 I recently had one such gal telling me how fed up she is with me and how she will not come to my site again. My crime? Simply exposing radical leftism at work. She is a self-professed socialist and hardcore leftist, yet she had the gall to say I was the fake Christian, and she was somehow the real deal!

These folks are often Christian in name only. What they really tend to be are card-carrying secular humanists. As such, they will often more or less look like this:
They prefer the Guardian, the New York Times and the Age to the Bible.
They think in socialist and Marxist terms and concepts instead of biblical ones.
They see sin as class divisions instead of our own moral rebellion against God.
They see salvation as the overthrow of capitalism, whites, and the West.
They would rather read the Gospel According to Marx than the Gospel According to Mark.
They adore prophets like Bernie Sanders, Michael Moore, George Soros, and Greta Thunberg instead of Jeremiah or Isaiah.
They cherish heroes like Marx and Lenin, Che Guevara, Mao, and Malcolm X, while paying lip service to Jesus.
They are happy to use the Bible when it suits their purposes, but it is only theological liberalism, which matches their political liberalism.

See more on all this here: billmuehlenberg.com/2017/07/15/theological-liberalism-progressive-christianity/

So just what is secular humanism? There is plenty of room to move in defining this, depending on where you are coming from. Some align it with atheism and aggressive hostility to Christianity, while others are less hardcore in this regard. Some see it a full-blown worldview, while others see it more as a political and cultural movement.

One can also argue about how it arose in the first place. A recent book argues that it springs out of the Christian worldview, and could not exist without these theological foundations. See Theo Hobson’s God Created Humanism: The Christian Basis of Secular Values (SPCK, 2017, 2018).

The latest edition of Understanding the Times by Jeff Myers and David Noebel (David C. Cook, 1991, 2016) says this about secular humanism:

Secularism is derived from the word saeculum, which is a Latin term for a span of time, typically a generation. . . . Secularists’ concern is for the current age (as opposed to eternity) and human beings (as opposed to God). Regardless of their personal theological commitments, Secularists seem to believe that all public considerations – education and government, primarily – must be based on materialism, the idea that only the physical world exists.

Secularism, as with other worldviews, offers a comprehensive view of reality. The authors continue:

To Secularists, any reference to the supernatural is ignorant, superstitious, or both. . . . Secularists are people of faith. They have a thorough faith in the scientific method, the theory of naturalistic evolution, and materialism. They have faith in what they consider to be reasoned arguments that are self-evident to all who are not deluded by other faiths. Above all, they have faith in their own human capacities.

Plenty of books could be mentioned here which represent this point of view, but simply reading the three Humanist Manifestos (1933, 1973 and 2000) will present you with all you need to know about their beliefs and values. But see here for more on this: billmuehlenberg.com/2007/05/22/secular-religion/

With so much great material already available on secular humanism, it might be best if I simply finish by quoting from some excellent titles. These volumes cover various aspects; philosophical, theological and sociological. All the books mentioned are well worth getting.

Two Catholic priests who wrote important books on atheistic philosophy are worth citing here. They note how secularism is not sustainable, and how it tends to destroy everything in its path. The French writer Henri de Lubac (1896-1991) penned a now classic book in 1944 called The Drama of Atheistic Humanism (Ignatius). In it he carefully examines the beliefs of people like Nietzsche, Comte, Marx and Feuerbach.

He said this: “It is not true, as is sometimes said, that man cannot organize the world without God. What is true is that, without God, he can only organize it against man. Exclusive humanism is inhuman humanism.” And American author Vincent Miceli (1915-1991) wrote a very valuable book in 1971 called The Gods of Atheism (Arlington House).

He also offers a very thorough assessment of these important and influential intellectual figures of the past few centuries. In the book he said this:

Moses failed to write the following commandment: ‘Thou shall not be an atheist.’ Instead his first commandment read: ‘I am the Lord thy God . . . Thou shalt not have strange gods before me.’ It was as if Moses had written: ‘Atheists are not godless men; they are men addicted to false gods’. Thus, the battle of love to which the Christian is honourably called today is the struggle to liberate his atheist neighbours from enthrallment to false gods and to help these neighbours find the True God.

Or as G. K. Chesterton put it in his 1908 classic, Orthodoxy: “The secularists have not wrecked divine things; but the secularists have wrecked secular things, if that is any comfort to them. The Titans did not scale heaven; but they laid waste the world.”

The 1982 volume by James Hitchcock, What is Secular Humanism (Servant Books), is also worth quoting from. He writes: “Modern Secular Humanism has been stained with blood from its very birth.” And again: “The Terror was the first example of a familiar modern phenomenon: a movement to remake the world in the name of humanity gives birth to a murderous and destructive fanaticism.”

The ultimate failure of Secular Humanism is in the fact that of its very nature it promises what it cannot fulfil. . . . In the Twentieth Century, mass slaughter has been perpetrated not by religious believers in opposition to heresy but by secularists convinced that their plan for a worldly utopia is the only possible one. . . . In modern times much greater suffering has been perpetrated in the name of humanity than has ever been done in the name of religion. . . . The great seventeenth-century Christian apologist Blaise Pascal wrote, ‘He who plays the angel plays the beast.’ When man aspires to a higher place in creation than the one to which he is entitled, he ends up in a lower place.

Francis Schaeffer also spoke much about secularism. Here are a few representative quotes from his 1981 volume, A Christian Manifesto (Crossway Books):

“Humanitarianism is being kind and helpful to people. The humanities are the study of literature, art, music, etc. – those things which are the product of human creativity. Humanism is the placing of Man at the center of all things and making him the measure of all things.”

“These two world views stand as totals in complete antithesis to each other in content and also in their natural results – including sociological and governmental results, and specifically including law.”

“We must never forget that the humanist position is an exclusivist, closed system which shuts out all contending viewpoints – especially if these views teach anything other than relative values and standards. Anything which presents absolute truth, values, or standards is quite rightly seen by the humanists to be a total denial of the humanistic position.”

And a few more quotes of his from The Great Evangelical Disaster (Crossway Books, 1984):

“Rightly defined, secular humanism – or humanism, or secularism, or whatever name you may wish to use – is no bogeyman; it is a vicious enemy. . . . Humanism is the deviant denial of the God who is there, with Man defiantly set up in the place of God as the measure of all things.”

“Do you really understand that the biblical view of man and the secularist view are a total antithesis – and as such, they result in a totally conflicting view of human life, with totally different consequences?”

Finally, this quote from the late Ravi Zacharias:

The problem with secularization is as it sweeps over a culture and takes root, you begin to lose definitions in the process. How do we define right from wrong, moral from immoral? …When secularization has done its work, it will lead to a generation that has lost its sense of shame. You show me a human being without a sense of shame, and I will show you a human being who will stop at nothing. Secularization literally comes from the Latin word “saeculum” which means “worldly.” There is no transcendent moral order.

Biblical Christianity and secular humanism are indeed two competing worldviews. Yet what I said at the outset still must be addressed: Why are there so many people calling themselves Christians who in so many ways are really just secular humanists?

12 Replies to “Secular Humanists Pretending To Be Christians”