Some thoughts on John Piper’s views on the US election:

Those who have followed me over the years know that I wrote quite a lot about Trump during the 2016 presidential cycle. Back then I and millions of other Christian conservatives had legitimate concerns about the guy. But during the past four years he has proven to be far better than many of us thought he could be. See here for more on my turnaround: billmuehlenberg.com/2020/02/04/on-trump-for-potus-in-2020/

The debate still rages among Christians – especially evangelicals – over Trump, and how we might vote this time around. There are, however, many Christians like me who have shifted from hesitancy about Trump to support for him – warts and all. 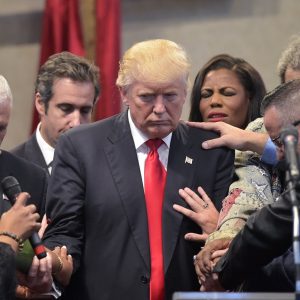 Sure, I and others full well knew that a Clinton win in 2016 would have been real bad news for America, but in the last four years the Democrats and the left have become even more radicalised, more “progressive,” and more opposed to everything we care about.

Never have the Dems moved this far left in their history, and a Biden/Harris win really would be disastrous for the US. Yet some evangelical leaders are still trying to tell us not to vote for Trump, or not to vote for either candidate. American pastor John Piper has been one very famous example of the latter.

He recently wrote an article that some – including myself – have found to be somewhat confusing and concerning. He says for example that the sin of pride is just as deadly as the sin of abortion. Well, yes, in the sense that all sins are deadly, and all sins lead us away from God and to eternal punishment.

But a sin like abortion of course leads to the actual physical death of the innocent. That is something God has often strongly spoken against. And I am sure that over the years Piper has taken the view that most of us have that not all sins are equal, and some are more odious than others. I make that case elsewhere: billmuehlenberg.com/2010/11/12/are-all-sins-equal-part-one/

You can read Piper’s piece for yourself here: www.desiringgod.org/articles/policies-persons-and-paths-to-ruin

So how might I and others respond? Needless to say, I have long liked Piper, and have often quoted from him. Indeed, I own 35 of his books. He has been a key populariser of the theology of Jonathan Edwards, perhaps America’s greatest philosopher and theologian.

Thus I for the most part always appreciate what he has to say. But here I might have to beg to differ. The stakes are getting too high to effectively waste a vote, or argue against picking sides. Yes, we have no perfect parties nor perfect candidates, but in a fallen world we have to make do with what is available.

While I could offer a lengthy discussion on all this, let me draw upon a few responses to Piper made by others. Their wisdom is also worth running with here. I begin with two shorter replies. In a Facebook post James White said this:

John Piper’s article demonstrates that even godly men can fall into the same pit of error: this isn’t about either Trump or Biden, both of whom are horribly flawed candidates. This is about a Marxist revolution and whether you will even *get* to vote in 2024. The reality I wish he understood is seen not in Trump’s arrogance or Biden’s cowardice–but in history in that Marxism brings death and tyranny. One side is literally promoting the utter abolishment of the Imago Dei. I do not understand how that can be missed. I would “get” (but disagree with) Piper saying he cannot vote for Trump due to morality, or Biden due to worldview and cowardice; but if this is a statement that he believes you could positively promote the worldview professed by Kamala Harris—astonishing if true, deeply disappointing as well.

Or as Jenna Ellis tweeted, “Unfortunately, @JohnPiper conflates the responsibility and privilege of voting with the need for the Church to take a more active role in culture. We must vote to PROTECT our God-given right to BE THE CHURCH. This article is designed to suppress Christian vote – DON’T LET IT.”

And several full length articles can be cited here. A few quotes from an article by Gary DeMar are worth offering. He says, “There are stark differences between the two political parties on most issues. When weighed on the scales of God’s law, it’s clear that the Democrats deserve all the criticism they are getting and then some. The Republicans need to be taken to task as well, but in terms of this election, the Democrats need to go down in flames.” And again:

Seeing evil and doing little or nothing to stop it because it might “undermine” an “authentic Christian witness” is bewildering to me. The numerous policies being promoted by the Democrat Party will hurt Christians as well as our unbelieving neighbors. Abortion and forcing parents to allow their eight-year-old children “change” their sex are just two examples. If you love your neighbor, the choice on November 3rd is clear. Piper offers no practical or tactical advice on how to confront the present social, cultural, and political evil….

I’ll end with this: I am sure the Jews being sent to the gas ovens were more concerned about their own physical death at the command of a tyrant than someone who might be arrogant but worked to stop the trains on the way to their doom. There is a difference, and anyone unable to note the difference is confused. americanvision.org/24777/my-response-to-john-pipers-paths-to-ruin-article/

I also like what Michael Brown had to say on this. He begins by offering seven areas in which he agrees with what Piper said. But he then goes on to discuss his differences. Here is part of what he wrote:

To begin with, the political system itself is earthly and flawed, with all candidates being far from perfect. While it would be ideal for our presidents to be shining examples of morality and character, very few in our history would live up to that ideal. This is not to make excuses but rather to be realistic.

Next, it is one thing to elect a boastful, divisive leader. It is another thing to empower a party that will sanction the killing of the unborn. Or strip away religious freedoms. Or give free reign to foreign, tyrannical regimes.

When it comes to Trump, we can vote for his policies while saying, “I don’t like many of the things he does and feel his example is often very destructive. I will therefore speak out when he acts wrongly and will model something different in my own life.” But a vote for Biden and the Democrats is a vote to empower a party that wants to impose an overtly godless agenda.

Finally, when it comes to listing the sins of Trump, Pastor Piper may have gone a little too far. Has Trump promoted or practiced sexual immorality since announcing his candidacy? To the contrary, hasn’t he expressed regret about some of his past actions? And does he get credit for keeping his promises and commitments in ways that few presidents in our lifetime have done?

Once again, I wholeheartedly agree with Piper’s emphasis on the gospel first (rather than “America first”). But I wonder if future generations would understand if we explained the loss of our freedoms and the slaughter of millions of more babies by saying, “Yes, one party espoused these terrible policies. But we couldn’t vote for the man whose party opposed them because he was too boastful and divisive.”

At times like this, my counsel is simple: Be idealistic in terms of living out your own faith as a witness for the Lord. But be pragmatic when it comes to casting your vote. stream.org/pastor-john-piper-and-the-2020-elections-a-respectful-response/

Of course Brown has penned a recent book on the Christian case for Trump. See my review of it here: billmuehlenberg.com/2020/07/30/a-review-of-evangelicals-at-the-crossroads-will-we-pass-the-trump-test-by-michael-brown/

Other more generic pieces by evangelicals who critique the ‘Christians for Biden’ camp can also be found. As one such example, consider a new piece by Peter Jones. I offer just one paragraph from it:

This election is an attempt at a cultural revolution. If Biden wins, we will be forced to live in a society made up of endless irreconcilable identity groups whose rule depends upon pure power. The power grab will define America’s political past as evil, impose a cancel culture package that will undo the created structures of family and sexuality, protection of the unborn, the practice of Christian religion, everyday fair play based on the Constitution, and free speech. It should be clear that the accusation of systemic racism now coursing through the veins of many of our institutions and corporations, is actually a call for the overthrow of the so-called corrupt American system and the way of life that made America the most civilized nation in human history. cornwallalliance.org/2020/10/a-plea-to-my-evangelical-friends-for-biden/

Suffice it to say that I have penned hundreds of articles over the years dealing with related themes, be it the case for Christian political and social involvement; the importance and the limits of politics; the need to not fully equate the gospel message with any one political party or program; and so on.

At the very least, all American Christians must vote very carefully and very prayerfully in the next week or so. This is a very important election indeed, and how we vote will have far greater ramifications than many might begin to realise.

26 Replies to “Evangelicals and Trump”