As part of my mad dash through Europe – or parts of it – let me focus briefly on the Swiss city of Geneva. It is of course a famous city of the Reformation period, and today noted as an international diplomatic city, with the UN, the Red Cross, and other global groups based there.

The reason I wish to speak to it here is because I was just there, again. While having a quick bite to eat there last night was quite enjoyable, the highlight of the evening was a return visit to a famous sight – at least for theology and church history fans. 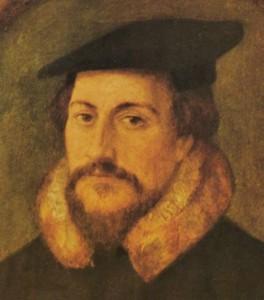 But let me speak just a bit more about Geneva, and its most famous figure, John Calvin. Calvin was born in France, and trained as a lawyer, but he had a “sudden conversion” in 1533. His interest in the Bible and theology led to a break with Catholicism, and he was forced to flee to Basel, Switzerland in 1536, the same year when the first edition of his Institutes of the Christian Religion was published.

Farel, a reformer in Geneva, pressed Calvin to come and help in the Genevan reform. So Calvin very reluctantly came. But the city council was resistant to the implementation of their ideas, so both men were expelled in 1538. Three years later they were invited to return.

Calvin’s main work was pastoral and theological, but his influence in the city was of course significant. But because of his social activities, Geneva became a changed city, and it attracted Protestant exiles from all around Europe. The Scottish reformer John Knox, described Geneva as “the most perfect school of Christ since the days of the apostles.”

In terms of theology, Calvin is of course known for his emphasis on God’s sovereignty and on such biblical doctrines as predestination and election. But his theology entailed far more than just those key themes. And he was not the cold, grey figure he is often made out to be.

This is the man who could write, “There is not one blade of grass, there is no colour in this world that is not intended to make us rejoice.” And he had a high view of the arts as well. While he opposed much art in church worship, in general he fully supported art and music. As he once wrote: “All the arts come from God and are to be respected as divine inventions.”

It is perhaps foolish to even raise this here, but since the many critics of Calvin will forever raise the issue of Servetus, let me speak to it ever so briefly here. Michael Servetus was of course the Spanish physician and Protestant theologian who strongly rejected such basic biblical doctrines as the Trinity, and was eventually executed in Geneva as a result.

Plenty of ink has already been spilled on this episode, but perhaps I can just offer one small defence, as expressed by noted theologian, James Packer. In an essay entitled “John Calvin and Reformed Europe,” he writes this in defence of the sad episode:

The anti-Trinitarian campaigner Servetus was burned at Geneva in 1553, and this is often seen as a blot on Calvin’s reputation. But weigh these facts:
The belief that denial of the Trinity and/or Incarnation should be viewed as a capital crime in a Christian state was part of Calvin’s and Geneva’s medieval inheritance; Calvin did not invent it.
Anti-Trinitarian heretics were burned in other places beside Geneva in Calvin’s time, and indeed later–two in England, for instance, as late as 1612.
The Roman Inquisition had already set a price on Servetus’ head.
The decision to burn Servetus as a heretic was taken not only by Calvin personally but by Geneva’s Little Council of twenty-five, acting on unanimous advice from the pastors of several neighboring Reformed churches whom they had consulted.
Calvin, whose role in Servetus’ trial had been that of expert witness managing the prosecution, wanted Servetus not to die but to recant, and spent hours with him during and after the trial seeking to change his views.
When Servetus was sentenced to be burned alive, Calvin asked for beheading as a less painful alternative, but his request was denied.
The chief Reformers outside Geneva, including Bucer and the gentle Melanchthon, fully approved the execution.
The burning should thus be seen as the fault of a culture and an age rather than of one particular child of that culture and age. Calvin, for the record, showed more pastoral concern for Servetus than anyone else connected with the episode. As regards the rights and wrongs of what was done, the root question concerns the propriety of political paternalism in Christianity (that is, whether the Christian state, as distinct from the Christian church, should outlaw heresy or tolerate it), and it was Calvin’s insistence that God alone is Lord of the conscience that was to begin displacing the medieval by the modern mind-set on this question soon after Servetus’ death.

I did not mean for this piece to get diverted into this particular controversy, but since it was sure to be raised, well, I had to at least speak to it briefly. Not only was Calvin a product of his age, but like every Christian leader, he was not without fault.

But the legacy of Calvin lives on, and he has contributed much to the church at large, not only back then in Geneva but throughout so much of the world today. Countless individuals have been influenced by him. The work of Dutch Prime Minister Abraham Kuyper is just one example of many: billmuehlenberg.com/2012/10/15/notable-christians-abraham-kuyper/

But let me leave you with just a few short quotes from Calvin in conclusion:

“There is no knowing that does not begin with knowing God.”

“Let us not cease to do the utmost, that we may incessantly go forward in the way of the Lord; and let us not despair of the smallness of our accomplishments.”

“The gospel is not a doctrine of the tongue, but of life. It cannot be grasped by reason and memory only, but it is fully understood when it possesses the whole soul and penetrates to the inner recesses of the heart.”

“All the blessings we enjoy are Divine deposits, committed to our trust on this condition, that they should be dispensed for the benefit of our neighbors.”

“There is no work, however vile or sordid, that does not glisten before God.”

“Seeing that a Pilot steers the ship in which we sail, who will never allow us to perish even in the midst of shipwrecks, there is no reason why our minds should be overwhelmed with fear and overcome with weariness.”

“A dog barks when his master is attacked. I would be a coward if I saw that God’s truth is attacked and yet would remain silent.”

“The pastor ought to have two voices: one, for gathering the sheep; and another, for warding off and driving away wolves and thieves. The Scripture supplies him with the means of doing both.”

18 Replies to “Calvin and Geneva”