One of the main postmodern beliefs is that there is no “metanarrative”. That is, there is no absolute, over-riding story that ties everything together, or offers us a coherent and consistent worldview. Instead, all we are left with is our own personal stories.

If you want to claim that it is bigoted and discriminatory to insist that we only eat food through the mouth, and that we must allow those who prefer to eat through their noses or ears, who am I to say this is wrong? If that sounds a bit far-fetched, it seems no more far-fetched to me than what we have done with sexuality, biology, marriage and family.

Marriage has always meant the union of one man and one woman – until the past few decades. That is because biology is one of those stubborn realities which cannot be wished away or altered at one’s whim. At least until recently. Now we think biology is also a social construct.

There is no metanarrative for biology, sexuality, gender, marriage, family and so on. Any version is as good as the next. Even though nature has clearly intended for heterosexual bonding to result in children (one of the primary reasons for marriage), in today’s PoMo world, biology does not mean a hill of beans.

So we have decided to not just jettison biology and gender, but we have gutted the very heart of marriage, and decided we will just make things up as we go along. Now that we have allowed the homosexual militants to smash marriage by claiming gender has nothing to do with it, there is no reason whatsoever to maintain any other restrictions.

If gender goes, then so too should number. And of course age restrictions are also bigoted and discriminatory, so they should be abandoned as well. And while we are at it, we should not be so species-ist about marriage – who says animals or objects cannot be involved?

So the homosexual assault on marriage and family has now done everything we have warned about for so long: it has opened the floodgates, wherein anything and everything is now allowed. Thus we see activist campaigns for polygamy, for polyamory, for incest rights, for bestiality rights, and so on. 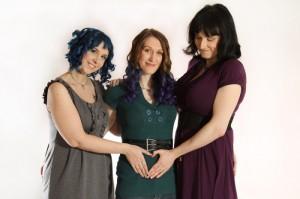 My new book will fully document these developments in great and disturbing detail. Indeed, I have documented multiple dozens of cases of this happening already, and there appears to be no end in sight as to where all this is heading. Consider the latest bit of news – this one involving a “family” of three lesbians and a baby:

Brynn, Doll and Kitten Young – who claim to the only “throuple” in the world – are expecting their newborn in just 3 months time. Doll, 30, and Brynn, 32, had been together for 2-and-a-half years when they decided to spice up their relationship with an additional partner.
Smitten after meeting Kitten, 27, through a threesomes’ website, they decided to tie the knot to each other last August.
And, after undergoing IVF with an unknown sperm donor, the youngest of the group is now with child. “The three of us have always wanted kids and wanted to grow our family,” Kitten, who like Doll took IT expert Brynn’s surname because she is the main breadwinner, told The Sun.
“We decided that I’d be the one to carry the babies because I’d like to be a full-time mom,” she added. Massachusetts became, in 2004, the first state to legalize same-sex marriage. It does not allow polygamy, however, meaning the trio’s marriage is not officially recognized. Despite this, they claim their union is the real deal. “In our eyes we are married. We had specialist lawyers draw up paperwork so our assets are equally divided,” said Brynn.

“In our eyes”. Yep, that says it all. When we throw out absolute truth and universal morality, then that which is right and wrong, true and false, becomes merely a matter of personal preference. And no one can disagree with personal preference. You like chocolate ice cream, while I prefer vanilla – both are neither right nor wrong – they simply are.

Such PoMo relativism of course means the end of civilisation. “In our eyes, chocolate ice cream is the best.” “In our eyes, Jews are not human beings, and can be treated as such.” “In our eyes, blacks are not real humans so we can enslave them as we will.” “In our eyes, unborn babies are not people, so they can be killed whenever we want.”

Not everyone was thrilled with this news item however. An editorial in the Washington Times put it this way:

Justice Antonin Scalia warned of such mischief when his colleagues tossed out the Defense of Marriage Act. “By formally declaring anyone opposed to same-sex marriage an enemy of human decency,” he wrote in his dissent in United States v. Windsor, “the majority arms well every challenger to a state law restricting marriage to its traditional definition.”
Justice Scalia predicted in 2003 that the majority decision in Lawrence v. Texas, striking down a law making sodomy illegal, would become the battering ram to eliminate prohibitions on bigamy, same-sex marriage, adult incest, prostitution, bestiality and obscenity, among other things.
That’s yesterday’s news, however, for Kitten, Doll and Brynn, who say they only want to demolish the stigma against polygamy. “The three of us have been brave enough to stand tall and go against what society calls normal,” Brynn told another tabloid, The London Daily Mail. ” … and we deserve the rights afforded to others.”
The three Youngs are the latest example of what Justice Scalia correctly identifies as the snowball picking up speed as it hurtles downhill. Lesbian activist Masha Gessen lifted the veil on the radical homosexual agenda when she told a Sydney, Australia, audience in May 2012 that same-sex marriage is “a lie.”
“Fighting for gay marriage,” she said, “generally involves lying about what we’re going to do with marriage when we get there,” adding, “It’s a no-brainer that the institution of marriage should not exist.” Noting that she has “three children with five parents,” Ms. Gessen said, “I don’t see why they shouldn’t have five parents legally.”

Yes the homosexual militants have been saying for quite some time now that anything goes in their brave new world of sexual and moral relativism. Truth is whatever we make it to be. Morality is whatever we prefer. That is life in our PoMo world.

Children deserve to be raised by their own biological mother and father, cemented in marriage? Nah, that is just your story. There is no truth here, or right and wrong. There is no metanarrative. There are only 7 billion stories, and we cannot say any is wrong.

After all, we don’t want to be seen as judgmental or intolerant. That is however rather odd in a PoMo world, don’t you think? In a worldview that says there is no ultimate truth and universal morality, there is still one absolute sin: to say something is wrong.

In this world of relativism, there is still one absolute vice: to claim something might not be right, or true, or good. But logical consistency was never a strong suit of the postmodernists. And we are all paying the price now as a result – especially our children and their three “mothers”.

20 Replies to “Postmodernism and Threesomes – Why Not?”