Michael Brown’s new book on the US elections is a must read:

This year’s American presidential election may be one of the most important ever. The differences between the two main parties and their vision for America could not be greater. The Republican vision under Donald Trump seeks to affirm America’s greatness – even despite its various faults. The Democrat vision is to fundamentally remake America into its own radical left image.

Those who are familiar with American Christian commentator Michael Brown will know his views on such matters. In addition to numerous columns on these issues, he had penned a book back in 2018 on this: Donald Trump Is Not My Savior: An Evangelical Leader Speaks His Mind About the Man He Supports as President. 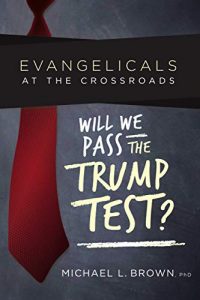 From his various writings it is clear that Brown worships one person only: Jesus Christ. But he is realistic about our political and social climate, and he understands that how he votes will make a real difference. Indeed, how we all vote will make a massive difference in a few months’ time.

He seeks to explain why this election is so crucial, and why a vote for the Democrats will be so detrimental to Americans and to America itself. In this volume he offers 17 short, punchy and well-referenced chapters dealing with a number of concerns, such as:

“Since When Was Loyalty to Trump the Dividing Line for Christians?”
“Does Character Still Count and Does Morality Still Matter?”
“Does a Vote for Trump Really Hurt Our Witness?”
“What Would Bonhoeffer Do?”
“What If Hillary Had Been Elected?”

Consider his chapter on “Since When Was Loyalty to Trump the Dividing Line for Christians?” He notes that both Trump supporters and Trump opponents can use their views on Trump as some sort of litmus test for Christian orthodoxy. Neither should be the case, and he urges us to insist upon biblical balance.

He closes this chapter with these words: “We can vote for Trump and support his presidency without doing so blindly. And we can stand with the president without becoming like the president. There’s quite a difference between the two.”

In his chapter on “Have We Failed the Love Test?” he again demonstrates how both sides have been guilty of unbiblical behaviour. He says this: “I do believe in fighting, but not the way the world fights. As Paul wrote, ‘We are human, but we don’t wage war as humans do’ (2 Corinthians 10:3, NLT).”

In another chapter contrasting pro-Trump cultists with anti-Trump cultists (and yes they do exist in both camps) Brown again seeks to move us away from extremes and into the biblical middle ground:

Personally, I do believe that there are many Trump supporters (including evangelicals) who seem to have a cult-like devotion to him, passionately defending him no matter what. . . . On the other hand, there are plenty of Trump supporters who are anything but cult-like in their support of him. They freely express their differences with him. They publicly bemoan his tweets and comments. They wish he would not shoot himself in the foot so often. And they make clear that they are voting against the radical left more than they are voting for him.

Later in that chapter he makes it quite clear that there is such a thing as Trump Derangement Syndrome. Brown, I and countless others know all too well that this sickness exists: simply dare to say something favourable about Trump and all hell will break loose. He really does seem to be the most hated president ever.

Of course this is a book on politics as much as on Christianity, so Brown has good reasons for urging us to vote for Trump. Early on he lists a number of his many vital accomplishments in his first term, and in his chapter on what a Clinton win would have looked like he reminds us of some hard truths:

Obviously, none of us know for sure what would have happened had Hillary Clinton been elected, but we can be almost certain that: 1) she would have nominated pro-abortion, pro-LGBT liberals to the Supreme Court and other federal courts; 2) she would have kept in place President Obama’s aggressive LGBT-activist policies in our children’s schools; 3) she would have strengthened Planned Parenthood; 4) her Justice Department and Attorney General would not have sided with conservative Christians in legal disputes.

Or as he explains in more detail in another chapter:

As I have often stated, I preferred other Republican candidates to Trump in 2016, but since it came down to Trump vs. Hillary, I voted for Trump. Why? Above all, it was a vote against Hillary Clinton, since I felt some of her key policies would be terrible for the nation. As for Trump, I hoped he would keep his campaign promises and: 1) fight for the life of the unborn; 2) support our religious liberties; 3) appoint conservative justices to the courts; 4) stand with Israel and move our embassy to Jerusalem; 5) push back against LGBT extremism; and 6) strongly oppose radical Islamic terrorism. I also hoped he would be a good economic leader, but that was not as high on my list. Immigration issues were even less important to me, as were a host of other issues that mattered to other voters. The items on my list were what mattered most to me when voting, especially the first five.

And a Biden win will be even worse of course, as he allows himself to be moved to the hard left by his hyper-progressive colleagues. But religious leftists think that a Biden win would be great. So Brown is forced to ask some hard questions in his chapter on “When the Left Demonizes the Right”:

Good questions indeed. In this book he asks many important questions. And since he asks them primarily of Christians, his concluding chapter is quite crucial by way of wrapping things up. In it he offers us “Ten Essential Keys for Passing the Trump Test”. Some of them are:

-We must clearly and emphatically put the cross before the flag.
-We must proclaim that Donald Trump is our president, not our Savior.
-We must put greater emphasis on spiritual activity than on political activity.
-We must regain our prophetic voice.
-We must unite around Jesus rather than divide over Trump.
-We must lead the nation in repentance, knowing that repentance prepares the way of the Lord, opening a path for revival, visitation, and awakening.

As should be clear by now, this book shows us that Brown is not being one-eyed. He is fully aware of the many weaknesses and deficiencies in Trump. He also understands that politics is not everything. But he is also a biblical realist, knowing that in a fallen world we are not dealing with perfect people, but with quite flawed people.

Therefore we have to make do with what is on offer in this election. And in this book Brown shows us how utterly contrasting our two main options are. So we must carefully and prayerfully seek to do the right thing come November 3. The election result – however it goes – may not be the end of the world, but it may be the end of America.

As always, Christians need to keep the big picture – the biblical picture – in mind. And Brown does just that throughout this book. Indeed, it is quite evident that he has his Christian priorities right when he closes his book with these paragraphs:

Let us, then, lead the nation in private and public repentance, in confession of sin and wrongdoing, of turning to righteousness, of turning to God. That is the great hope of America, not four more years of Donald Trump, or any political candidate, but a heaven-sent revival and awakening.

Until that time comes, we pray, we reach out, we serve, we speak, we love, and we get involved in the political process, but with our focus in the right place and our hopes firmly rooted in the Lord and the Lord alone. If we do this, we will pass the Trump test with flying colors. And who knows? Perhaps he too will be mightily touched by God and help lead the nation into deeper repentance and awakening. What is impossible with people is possible with God.

Thank you Michael Brown for bringing much-needed biblical, political, moral and intellectual clarity to one of the most divisive moments in American history. This is indeed a watershed moment, and what you have to say in this book offers us a very useful roadmap for how Christians – and others – should proceed.

7 Replies to “A Review of Evangelicals at the Crossroads: Will We Pass The Trump Test? By Michael Brown.”