The widescale suppression and censorship of information has been done before:

I have often spoken about the politicisation of society. And it is clearly the case that for many years now even things like medicine and science have become heavily politicised. And when this occurs, you can fully expect indoctrination and censorship to replace facts and the free flow of information. 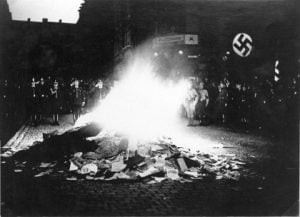 We are certainly seeing this happen with the corona crisis. The censorship of ideas and information not considered to be ‘correct’ by Big Tech companies and social media outfits is every bit as damnable and dangerous as what was done in Germany not so long ago.

The full-fledged debate over hydroxychloroquine and whether it may be of help as a treatment in corona is a clear case in point. Facebook, Google, Twitter, YouTube and other tech giants are now deciding what can be posted on this and what cannot.

For example, the recent White Coat Summit in which a number of doctors sought to make the case for it has been pulled down continuously and prevented from getting a hearing. It goes against the narrative, so the masses will NOT be allowed to even hear the case being made, and decide if there is any merit to it.

The story of this latest case of censorship has been told often by many now, so here is but one link: pjmedia.com/news-and-politics/tyler-o-neil/2020/07/28/facebook-twitter-youtube-remove-doctors-coronavirus-video-claiming-it-is-false-n719341

Tucker Carlson put it this way:

Scientific consensus changes. That’s the point. As we learn more, our conclusions change. Legitimate scientists understand that. That’s called the scientific method. Big Tech companies don’t care one way or the other because their goal is not the truth. Their goal is to control the outcome of an election. It’s not to protect public health. This isn’t about public health, and it’s not about science. It never was. It’s about power. And no one in the history of the world has ever had more power than Google and Facebook have right now. www.foxnews.com/opinion/big-tech-censors-covid-19-video-tucker-carlson

Exactly. And the truth is, the line we are now being told is this: ‘If masks help even a little then they must be worn – no questions asked. But any information about hydroxychloroquine will be banned, and you will be restricted from getting access to it, even if it might help a little.’ It is the usual double standards once again at play.

It is not my intent here to enter into the scientific debate on this – there are others far more qualified. Let me just briefly mention some of them. In a recent piece in Newsweek, Harvey Risch, MD, PhD, and professor of epidemiology at Yale School of Public Health, made an impassioned plea for using this drug. He argues that it is the “key to defeating COVID-19”. But he is fully aware of how things have been politicised:

As professor of epidemiology at Yale School of Public Health, I have authored over 300 peer-reviewed publications and currently hold senior positions on the editorial boards of several leading journals. I am usually accustomed to advocating for positions within the mainstream of medicine, so have been flummoxed to find that, in the midst of a crisis, I am fighting for a treatment that the data fully support but which, for reasons having nothing to do with a correct understanding of the science, has been pushed to the sidelines. As a result, tens of thousands of patients with COVID-19 are dying unnecessarily. Fortunately, the situation can be reversed easily and quickly.

He concludes his important piece this way:

In the future, I believe this misbegotten episode regarding hydroxychloroquine will be studied by sociologists of medicine as a classic example of how extra-scientific factors overrode clear-cut medical evidence. But for now, reality demands a clear, scientific eye on the evidence and where it points. For the sake of high-risk patients, for the sake of our parents and grandparents, for the sake of the unemployed, for our economy and for our polity, especially those disproportionally affected, we must start treating immediately. www.newsweek.com/key-defeating-covid-19-already-exists-we-need-start-using-it-opinion-1519535

And we keep getting studies telling us that there is real benefit to using this drug. One study from just this month is worth being aware of: “A substantial study has found that the arthritis medicine hydroxychloroquine sulfate helped patients survive COVID-19. In fact, the study from the Henry Ford Health System in Michigan said the drug ‘significantly’ cut the death rate of patients.”: www1.cbn.com/cbnnews/us/2020/july/new-hydroxychloroquine-study-proves-trump-right-says-it-significantly-cuts-death-rate

The following site offers us much more along these lines. Many dozens of studies are examined, with this conclusion being drawn: “Global HCQ studies. PrEP, PEP, and early treatment studies show high effectiveness, while late treatment shows mixed results”: c19study.com/

There are many more such pages that can be presented here. As I keep saying, I – like most of you – am not a medical expert, so I have to rely on those who are, and when conflicting claims arise, one can only seek to discern truth from error as best one can. But when one side of the debate keeps being censored so heavily, that is quite telling in itself.

Indeed, I have to go along with California cardiologist Dr. Afshine Emrani on this:

You know what the real conspiracy is? A handful of pompous, Silicone Valley boys trying to control what you read, what you believe. They want to tell you what to think. Google. Facebook. YouTube. Twitter. Imagine Wells Fargo, BofA, Morgan Stanley telling you that you should buy stocks, and a group of private financial advisors making a video telling you that this is a bad time to buy and you should keep your cash. Imagine Google, Facebook, YouTube, Twitter removing that video. Nuts, right? That’s exactly what happened yesterday. A number of working physicians across several disciplines talked about the potential use of hydroxychloroquine and opening up schools and the economy. The video was removed. By Google, Facebook, YouTube, Twitter. Mind you, 1- they have NO effective treatment for Covid19 when a patient gets sick, before ending up in the hospital, and 2- hydroxychloroquine is used by millions of young and old alike and has never been said to be dangerous, and is over-the-counter in many countries such as Mexico! These “elite” Silicone Valley boys don’t think YOU are capable of thinking for yourself. They want to feed you THEIR agenda! They want to tell you what news to listen to, what politics to believe in, what products to buy, what medicine you should take. It is MORE than censorship. They want to OWN you.

So I return to my original point. Not all that long ago we had book burnings as a regular part of tyrannical control. Whenever an ‘official’ narrative is mandated, and all competing views eliminated or banned, that is always a recipe for real trouble.

Do scientists and medical experts differ on the value of things like HCK? They sure do. Do they differ on things like the value of wearing masks? Yes they do. They differ not only with each other, but can often differ with themselves over time. Thus we need to be wary of infallible ‘experts’ who can say and do no wrong. They can get things wrong – repeatedly.

And when science and medicine become politicised, then we are in a real bad way. This happened quite clearly in Nazi Germany. Both were brought to bear to serve the cause of Hitler’s dark ideology. And of course the suppression of other points of view was the norm.

The only thing more worrying than all the censorship and attacks on those holding differing thoughts on these matters is the number of folks who have succumbed to being blind sheeple, doing whatever they are told to do by the powers that be. After all, ‘it is for their own good’ so they must obey without question.

Let me close by quoting from a very important book that first appeared in 1955: They Thought They Were Free: The Germans, 1933-45 by Milton Mayer. One reviewer of the book provides this background to it:

In 1952, American journalist Milton Mayer moved his family to Marburg, Germany, a small town near Frankfurt. There, he set about to answer the question plaguing the world since Hitler’s rise in 1933: how did a modern, western democracy fall prey to Nazism? Mayer was from German descent himself and a Jew, and he decided the answer to this quandary might lie in the “little man.” Mayer met with ten such men in Marburg, men who had average jobs and lived average lives.

Here then are a few paragraphs from the book:

What happened here was the gradual habituation of the people, little by little, to being governed by surprise; to receiving decisions deliberated in secret; to believing that the situation was so complicated that the government had to act on information which the people could not understand, or so dangerous that, even if the people could not understand it, it could not be released because of national security. And their sense of identification with Hitler, their trust in him, made it easier to widen this gap and reassured those who would otherwise have worried about it.

This separation of government from people, this widening of the gap, took place so gradually and so insensibly, each step disguised (perhaps not even intentionally) as a temporary emergency measure or associated with true patriotic allegiance or with real social purposes. And all the crises and reforms (real reforms, too) so occupied the people that they did not see the slow motion underneath, of the whole process of government growing remoter and remoter.

So am I saying that Western leaders today are just a bunch of Nazis? Of course not. But what I am saying is this: “Those who cannot remember the past are condemned to repeat it” (the Spanish philosopher George Santayana in The Life of Reason, 1905).

24 Replies to “Corona and Censorship – Where Have We Seen This Before?”