We can so easily make or break our children:

If you are getting on in years – and especially if you were into the 60s ‘peace and love’ scene – you will instantly recognise the title I have chosen. It of course comes from a 1970 hit song by Crosby, Stills and Nash. While the tune is neat and memorable, the lyrics and the message are not quite what I would necessarily run with. For those interested, you can hear the original version of the song here: www.youtube.com/watch?v=EkaKwXddT_I 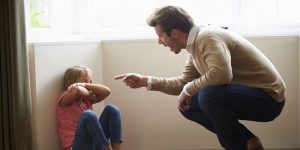 But the title will serve my purposes as I seek to discuss the great care that we parents need to have in regard to our own children. I am especially thinking about the way we speak to them, what we say, and how we say it. But let me offer a story which explains why I am writing on this topic.

What got our attention was a guy yelling quite loudly and harshly, presumably at his son. It seems the son had to slow down, perhaps to avoid running into others, and the dad ran into the back of him. Nothing at all major by the look of it. But sadly everyone in the area could hear the dad tearing into and berating his son.

I forget exactly what his short outburst was, but it went something like: ‘You idiot! Don’t be so stupid! What is wrong with you! Don’t do that again!’ While it is possible this was a one-off by the angry dad, I suspect this may have been the norm. He likely often chews out his young son this way.

Right away I felt quite bad for the boy, and I may have shot up a quick prayer for him at the time. When a youngish child gets their own parents calling him names like ‘idiot’ and ‘stupid’ and gets it repeatedly, that will take a real toll. Sure, it may depend to some extent on the temperament of the child. But if he is anything like me, it will be bad news.

You see, for basically all of my life – certainly when I was younger – I have had a very low self-image. I am not fully certain why that is – poor body image and so on may have been part of it. And strangely, I have very few memories of when I was a child. But one thing does remain with me: When quite young I recall telling my dad, ‘The only thing I am good at is not being good at anything.’

So a poor self-image certainly is not helped when one gets hard, cutting words from one’s parents. Not that my parents were this way. If anything, they were not too talkative, so I got little input – positive or negative. But that in part explains why I am – believe it or not – not all that talkative either.

But enough of me. My point is that many children have a rough time growing up. And today the pressures are perhaps greater than ever. Because of mass media, social media, advertising, etc., trying to be cool and have the ‘look’ is a huge pressure on most kids.

As I say, I feel for the kid, and I will need to keep him in my prayers. And there would be millions of other children just like him in the West. It is tragic. Wounded kids make for wounded adults. This is a national calamity. And with more and more children growing up without both mum and dad makes things even worse.

I have made far too many mistakes along the way, and I often feel quite bad at my many failures here. But if nothing else, I can urge others to seek to do better, and perhaps not follow my example. Our children are sensitive and fragile and easily damaged. The words we speak to them can build them up or tear them down.

And no, I am not pushing the dodgy Positive Confession teaching here, which gives words almost a magical power, and where one can basically create one’s reality by what one says. The point I am trying to make is that kids hear what is being said, and if they get a constant barrage of negative words, criticisms and attacks, that will adversely affect most of them – often for life.

So every parent has a huge responsibility to teach their children well – by both words and by actions. Again, I am not offering any expertise here. For that you need to run with all the terrific resources that are already out there. Groups like Focus on the Family for example have plenty: books, magazines, videos, online teaching, etc.

Since I do have a number of titles from them, I have pulled a few volumes off my shelves, blown off the dust, and can share a few insights with you. Out of some 60 books in my parenting and family self-help section – books I perhaps should have read more closely when my kids were young – I grabbed several volumes and can offer a quote or two from each.

Let me begin by focusing on parents. If you are like me, you may think you have done a lousy job. In his 1991 book Straight Talk, James Dobson is asked about parents whose kids are grown up, and they now know they did not do a great job in raising their kids on the right principles. Dobson responds:

There’s hardly a parent alive who does not have some regrets and painful memories of their failures as a mother or a father. Children are infinitely complex, and we can no more be perfect parents than we can be perfect human beings. The pressures of living are often enormous. We get tired and irritated; we are influenced by our physical bodies and our emotions, which sometimes prevent us from saying the right things and being the model we should be. We don’t always handle our children as unemotionally as we wish we had, and it’s very common to look back a year or two later and see how wrong we were in the way we approached a problem….

I know God will honor that prayer, even for parents whose job is finished. The Lord does not want you to suffer from guilt over events you can no longer influence. The past is the past. Let it die, never to be resurrected. Give the situation to God, and let Him have it. I think you’ll be surprised to learn that you’re no longer alone!

And in his 1996 book Solid Answers he has a chapter on building self-confidence in children, and how there is an epidemic of self-doubt and feelings of low self-esteem. In response to one question on this he writes:

Kids are extremely sensitive to their parents’ love and respect. That’s why adults must learn to guard what they say in their presence. Many times I have been consulted by a mother regarding a particular problem her child is having. As Mom describes the details of the boy or girl’s problems, I notice that the subject of all this conversation is standing about a yard behind her. His ears are ten feet tall as he listens to a candid description of all his faults. The child may remember that conversation for a lifetime. Parents often inadvertently convey disrespect to a child whom they genuinely love….

My final quote comes from Rob Parsons. His 1995 volume The Sixty Minute Father has a chapter on the need to praise children. He says, “So much of the training we give our children is based on catching them doing something wrong and criticising them for it. But there is another way. . . . Although most of us eventually respond to criticism – the faster route is always praise.”

He quotes another who says, “Help people reach their full potential – catch them doing something right.” He then goes on to say:

The power of praise is awesome. There is hardly a person on the face of the earth who does not respond to it. Most of us know how effective it can be in the work situation but forget that to a child it can be like rain in the desert. Praise does so many things at once. It tells us that what we are doing is right. It encourages us to do it again. It makes us want to please the person who has encouraged us. And it builds bonds of affection. It must never be insincere, but it can be given for small victories. . . . The principle of catching our children doing something right is a powerful one.

If you are familiar with his talks, you know that he famously discusses the teenager and his messy bedroom, with clothes and stuff strewn everywhere. How do you say something positive then? How do you give praise in that situation? He suggests this: “Son, your ceiling certainly is tidy!”

As I said, I am no parenting expert, and I am no expert parent. I made many mistakes, and I wish I had done a better job. So do not turn to me for counsel and guidance, but to these experts that I have shared from. And what I shared of course only scratches the surface. So much more can be said.

But I close with a quote attributed to abolitionist and statesman Frederick Douglass: “It is easier to build strong children than to repair broken men.”

As mentioned, I am not a counsellor or a pastor or anything like that. So if some of you are hoping I will now be penning many more how-to type of articles, given how unqualified I am, that probably won’t happen. Unless of course the Lord strongly urges me in that direction!

14 Replies to “Teach Your Children – Well”