Schools today are more about indoctrination than education:

That so much of modern Western education – from kindergarten through to the universities – is becoming increasingly a hotbed for radical left indoctrination and propaganda is something I and others have often written about. Indeed, small libraries exist with volumes by those who have carefully documented the leftward drift of contemporary education in most Western nations.

As such, many students will emerge from the education system well versed in political correctness, wokeness, identity politics, and the complete radical left agenda. Whether they will graduate from high school with any basic skills such as literacy, numeracy and the like is another matter. 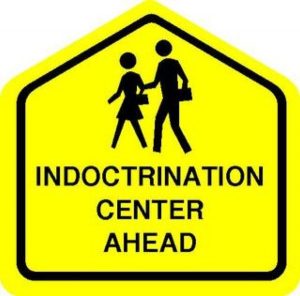 They may not grow up with the ability to read and write – or at least not able to do so very well – but they almost certainly will have had their minds fully primed and pumped on all things leftist, and will leave their schools fully believing that there are many enemies out there which must be steadfastly resisted and hated upon: Western civilisation, capitalism, the natural family, Christianity, traditional morality, and especially America.

As I say, I have often written on such matters. See the other 219 articles here on all things education: billmuehlenberg.com/category/education/

Here I want to do so again, but from a somewhat different angle. In a recent morning prayer walk I passed by a local primary school. As the sight and sounds of young children playing outside came my way, I did something that I may have done for the first time: I sent up a prayer for those kids. It was along these lines:

‘Lord, probably the great majority of these children are not Christians, and do not come from Christian homes. They are unlikely to hear anything of the Christian gospel in the school, but instead are quite likely to be inundated – even at their young ages – with all sorts of secular left propaganda and indoctrination. Please somehow reach them for yourself.’

Just after I finished praying that, and while still near the school, its public address system went off. What I heard was something like this: ‘Children around the nation will all be celebrating aboriginal pride week’ or something along those lines.

Wow, the very thing I had just prayed about! Now there is nothing amiss in learning about a nation’s past, including what life was like before European settlement. But why do I suspect that they will be getting far more than this? Why do I suspect they will get the whole package of leftist group think, including the victimisation narrative, the ‘Whites are evil’ agenda, and all the identity politics that goes with it?

And this is likely not all they will be getting day in and day out during their early years of education. I suppose that all the other leftist agenda items will be covered ad nauseam, including climate hysteria, corona alarmism, the rewriting of history, and the denunciation of Western civilisation.

If you want to know why the West is in such bad shape, and why so many folks seem to have no clue as to what is going on, this is a big part of the reason. We have turned our schools over to the activists and the secular leftists for the most part. And they are quite happy to use them for propaganda and not for genuine education.

And of course this has not happened by accident. The militants have long known about the importance of controlling the schools. Various versions of what Vladimir Lenin is reported to have said can be offered here:

“Give me just one generation of youth, and I’ll transform the whole world.”

“Give me four years to teach the children and the seed I have sown will never be uprooted.”

“Give us the child for 8 years and it will be a Bolshevik forever.”

Plenty of secular humanists can also be cited here. Just one – Charles F. Potter – will make do: “Education is thus a most powerful ally of humanism, and every public school is a school of humanism. What can the theistic Sunday school, meeting for an hour once a week, and teaching only a fraction of the children, do to stem the tide of a five-day program of humanistic teachings?”

Those who are not hostile to the West and faith have also noted the power of schooling. According to Abraham Lincoln, “The philosophy of the school room in one generation will be the philosophy of government in the next.” When the school system taught the three Rs and mostly ran with the values of the surrounding culture, this was not a problem.

But when education has been taken hostage by those who are hostile to the values and beliefs of most of those in the surrounding culture, then it is a big problem indeed. So what is the answer? What is the way forward? Those questions are really the stuff of another article or two.

A few quick things can be mentioned, however. As the state or public school system continues to go downhill, then parents have to explore other options. Homeschooling is of course a major choice here, one that millions of parents are making use of. See my 17 prior articles on this here: billmuehlenberg.com/category/education/homeschooling/

Sure, plenty of parents will claim they cannot homeschool for all sorts of reasons. That is likely true for some – but not for all. And there are of course private and religious schooling options – some of which are better than others. And seeking to reform the public school system – if possible – is also part of the to-do list.

However we proceed as parents and as societies, we need to be fully aware of just how bad the school system is getting in the West. We cannot underestimate how politicised it has become, and how much leftist indoctrination takes place there on a regular basis and throughout all aspects of the curriculum.

To further make this point, let me close with a few more choice quotes. They will not tell us exactly how to personally respond and which path to take, but they should at least make us fully aware of just how bad and entrenched the problems are.

“To control the future requires the control of education and of the child. Hence, for Christians to tolerate statist education, or to allow their children to be trained thereby, means to renounce power in society, to renounce their children, and to deny Christ’s Lordship over all of life.” R. J. Rushdoony

“Character-building, as practiced in our public schools, may well prove to be character-destruction. . . . I can see little consistency in a type of Christian activity which preaches the gospel on street corners and at the ends of the earth, but neglects the children of the covenant by abandoning them to a cold and unbelieving secularism.” J. Gresham Machen

“You cannot send all the Christian kids off to be educated in a school system that is riddled with rank unbelief, shot through with relativism, and diseased with perverse sexual fantasies, and then wonder at the results you get. And why are you not allowed to wonder about it? Because God is not mocked.” Douglas Wilson

“To leave our youthful population in the hands of secular teachers, will be to sell them to the Ishmaelites.” Charles Spurgeon

“We cannot continue to send our children to Caesar for their education and be surprised when they come home as Romans.” Voddie Baucham Jr.

“Your children will go to public school … and they will be trained for somewhere around 15,000 hours in ungodly secular thought. And then they’ll go to Sunday school and they’ll color a picture of Noah’s ark. And you think that’s going to stand against the lies that they are being told?” Paul Washer

7 Replies to “Children, Education, and the Future of the West”