This should be of help as you read through and study Ephesians:

All up the Apostle Paul wrote 13 canonical letters, making up almost half of the New Testament. Ephesians is one of four letters of Paul that we refer to as the Prison Epistles. The other three are Philippians, Colossians, and Philemon. They refer to letters penned by the apostle while he was incarcerated. Thus this book was probably written when Paul was under house arrest in Rome between approximately 60-62 AD. 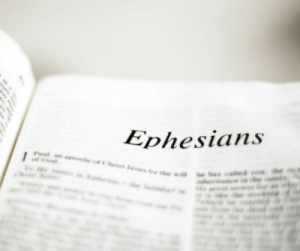 This book is also one in which Pauline authorship is questioned by some scholars. Other such disputed epistles include Colossians, 2 Thessalonians, 1 & 2 Timothy, and Titus. That complex and detailed debate cannot here be entered into, but see the introductions to most of the critical commentaries I list below for full discussions of these matters.

Suffice it to say that Ephesians is a very important epistle of Paul. Although brief (just six chapters), it contains crucial Christian truths concerning doctrine and life. English New Testament scholar Max Turner nicely introduces the epistle and its importance as follows:

No NT writing more joyfully celebrates God’s grace in the gospel than does Ephesians, nor does any contain so rich and concentrated a vein of theological gold. This short letter’s profound and extensive influence on the church’s thought, liturgy, and piety ranks with that of the much longer Psalms, John, and Romans. It was Calvin’s favorite letter, and Coleridge was later to pronounce it “the divinest composition of man.”

Or as Bryan Chapell remarks:

Most Pauline epistles are directed to the problems or progress of an individual church, requiring an initial exposition of doctrinal truths that will drive later practical instructions. However, most scholars understand that Paul writes Ephesians as a general letter to the churches within the vicinity or cultural influence of Ephesus. For this collection of churches in a culture antagonistic to the gospel, the apostle Paul pens themes so grand they can still take our breath away, and they often move even the apostle to doxology and prayer.

One more introductory word of praise for this great epistle. James Montgomery Boice made these observations:

As I study books of the Bible I find that those who write commentaries invariably extol their particular book as deepest, most important, or most relevant. Writers on Ephesians are no exception. William Barclay calls Ephesians “the queen of the epistles.” The English poet Samuel Taylor Coleridge termed this book “the divinest composition of man” because, as he believed, “it embraces, first, those doctrines peculiar to Christianity, and, then, those precepts common with it in natural religion.” John Mackay, a former president of Princeton Theological Seminary who was converted at the age of fourteen through reading Ephesians, called it the “greatest … maturest … [and] for our time the most relevant” of all Paul’s writings. “This letter is pure music,” he said. Ruth Paxson called Ephesians “the Grand Canyon of Scripture,” meaning that it is breathtakingly beautiful and apparently inexhaustible to the one who wants to take it in.

It should be noted, as many have pointed out, that this book shares a number of features in common with the book of Colossians. As I. Howard Marshall says in his New Testament Theology:

There is an extensive amount of material in common with Colossians, although it tends to be used with different nuances. Where Colossians could be said to center attention on Christ, Ephesians gives greater attention to the role of God the Father. Where Colossians is dealing with a specific threat to the Christianity of the recipients, Ephesians is much more concerned with expounding the nature of Christian salvation with respect to the church composed of Jews and Gentiles, and then the character of the new life that flows from this. And Where Colossians is generally argumentative and even polemical in tone, the style of Ephesians is much more that of prayer and meditation. The result is one of the most theological of the New Testament documents…

It is a standard practice of Paul to begin his letters with theological and doctrinal matters, and then finish them with the practical implications of these truths for the Christian believer. Thus we find Eph. 1-3 containing theological truths and matters of doctrine, and the remaining chapters containing application.

Memorable features of this epistle include its emphasis on one people of God in Christ (2:11-22), exhortation to maintain our unity as believers (4:1-16), and the importance of the spiritual armour of the Christian (6:10-20). Let me focus on two important themes.

In chapter 3, verses 1-13 Paul discusses his ministry to the Gentiles, something that was formerly a mystery but is now being revealed – and realised. And Paul writes about this while being a prisoner, urging them not to lose heart. Darrell Bock says this in part on this matter:

God has a programme and Paul is a steward in that programme. He carries out faithfully the assignment God has given him: to make known that in Christ God has designed a way for Gentiles to become co-heirs with Jews – a programme of reconciliation (2:11-22; 2 Cor. 5:18-21)….

What we see is a theology of the plan and programme of God, centred in Christ, that takes us to deliverance but not without suffering. The lessons of suffering are important to learn in a hostile world. Paul is not anxious about his situation because he trusts God and understands the tension that comes with the assignment. He preaches without fear this hope of reconciliation that is a key product of salvation. He wants the Ephesians not to be overly concerned either, but to live out their faith in a way that points to the contrast with how the world functions, including in reflecting this reconciliation.

A second thing worth looking at is Paul’s discussion of principalities and powers and the war we are in, as dealt with in 6:10-20. John Stott offers some useful commentary on this:

The abrupt transition from the ‘peaceful homes and healthful days’ of the previous paragraphs to the hideous malice of devilish plots in this section causes us a painful shock, but an essential one. We all wish we could spend our lives in undisturbed tranquillity, among our loved-ones at home and in the fellowship of God’s people. But the way of the escapist has been effectively blocked. Christians have to face the prospect of conflict with God’s enemy and theirs. We need to accept the implications of this concluding passage of Paul’s letter. ‘It is a stirring call to battle… Do you not hear the bugle, and the trumpet?… We are being roused, we are being stimulated, we are being set upon our feet; we are told to be men. The whole tone is martial, it is manly, it is strong’. Moreover, there will be no cessation of hostilities, not even a temporary truce or cease-fire, until the end of life or of history when the peace of heaven is attained. It seems probable that Paul implies this by his Finally… For the better manuscripts have an expression which should be translated not ‘finally’, introducing a conclusion, but ‘henceforward’ meaning ‘for the remaining time’. If this is correct, then the apostle is indicating that the whole of the interim period between the Lord’s two comings is to be characterized by conflict. The peace which God has made through Christ’s cross is to be experienced only in the midst of a relentless struggle against evil. And for this the strength of the Lord and the armour of God are indispensable.

For a taste of what good expository preaching looks like in terms of this epistle, see this article: billmuehlenberg.com/2018/10/27/martin-lloyd-jones-on-ephesians-2/

As to my possible favourites, Arnold, Cohick, Hoehner and Thielman are certainly very thorough and detailed. Don’t forget Stott for something less daunting, and Lloyd-Jones for first-rate expository sermons.

(Australians can find most of these books at Koorong: www.koorong.com/ )