Christmas is the story of a heavenly rescue plan:

The story of Christmas is the story of the God of the universe leaving the comforts of heaven, entering into our sin-soaked world, and performing a gallant rescue operation for those who could not save themselves. We have had notable rescue efforts recorded in history of course. Think of the 1940 Operation Dynamo in which 340,000 Allied soldiers were rescued from Dunkirk beaches in Nazi-occupied France. You can see more detail on that here: billmuehlenberg.com/2017/08/03/dunkirk/ 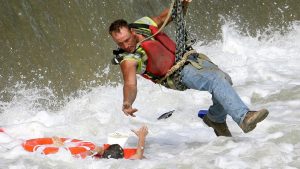 But the heavenly plan to rescue humans trapped in their sin with no way out certainly was the greatest rescue of all time. To take a sin-hardened race of rebels who want nothing to do with God, and find a way that they can be reunited, restored, and reconciled to their Creator is surely the most remarkable of all rescue plans.

And that is the very heart of the Christmas story. It is about Immanuel – God with us. God did not remain aloof and unconcerned about our plight, but he entered into our world as a flesh and blood human. The Incarnation is all about the Son of God taking on a human nature in order that he might rescue us from the bondage of sin.

Scripture makes it perfectly clear that we were NOT in a position to save ourselves. Self-rescue was impossible. Our only hope of being delivered from our precarious and deadly situation was for intervention from without. And that is just what God in Christ did for us.

Rescued from a hopeless situation

I mentioned one historic rescue operation above. The other day on the news I saw a story about another rescue. It was radically different, but for the one needing rescuing, the situation was just as dire, and the outcome could have really gone sour. And it helps to make the case for what I have been saying about the true meaning of Christmas.

It had to do with a little lost kitten who found herself trapped in the very busy and very dangerous (at least for a kitten) M5 tunnel in Sydney at 11 o’clock at night. Traffic of all sorts was zooming by, and she, on one side of the tunnel, was becoming increasingly distraught, panicky and hopeless.

When a large semitrailer came roaring by, that really tipped her over the edge. She stopped running frantically and just laid down and curled up into a ball, seemingly resigning herself to her doom. It was a heart-wrenching moment to behold.

But thankfully traffic controllers who monitored the tunnel spotted her with their cameras. They zoomed in on her and realised an urgent rescue was needed. It was not long before an incident response team was there, and with a little bit of effort, they managed to grab the scared kitten and bring her to safety.

And the story finished with a happy ending. Whether the kitten was just lost, or abandoned, she ended up being adopted into the rescuer’s family. You can see the whole episode in this short video: www.youtube.com/watch?v=M5ud66XCWN8

That story offers us just one small illustration of the heavenly rescue. We too were in dire straits with no way out, and death was imminent. Yet a rescue mission from without came to our aid, and for those so rescued, they too were adopted into a new family – the family of God.

The Bible of course speaks about how humans – such as human fathers – will do loving and sacrificial things for their own, emphasising how much more God will act like that on our behalf. Consider a few such passages. Matthew 7:7-11 says this:

Ask, and it will be given to you; seek, and you will find; knock, and it will be opened to you. For everyone who asks receives, and the one who seeks finds, and to the one who knocks it will be opened. Or which one of you, if his son asks him for bread, will give him a stone? Or if he asks for a fish, will give him a serpent? If you then, who are evil, know how to give good gifts to your children, how much more will your Father who is in heaven give good things to those who ask him!

One also thinks about the Parable of the Persistent Widow in Luke 18:1-8:

And he told them a parable to the effect that they ought always to pray and not lose heart. He said, “In a certain city there was a judge who neither feared God nor respected man. And there was a widow in that city who kept coming to him and saying, ‘Give me justice against my adversary.’ For a while he refused, but afterward he said to himself, ‘Though I neither fear God nor respect man, yet because this widow keeps bothering me, I will give her justice, so that she will not beat me down by her continual coming.’” And the Lord said, “Hear what the unrighteous judge says. And will not God give justice to his elect, who cry to him day and night? Will he delay long over them? I tell you, he will give justice to them speedily. Nevertheless, when the Son of Man comes, will he find faith on earth?”

And Hebrews 12:3-11 comes to mind. Here are verses 9-10: “We have had earthly fathers who disciplined us and we respected them. Shall we not much more be subject to the Father of spirits and live? For they disciplined us for a short time as it seemed best to them, but he disciplines us for our good, that we may share his holiness.”

The point is, while humans may be compassionate and kind to others, how much more is our heavenly Father? And Scripture even looks at how God has the well-being of animals in mind. Jesus himself said this in Matthew 10:29-31: “Are not two sparrows sold for a penny? And not one of them will fall to the ground apart from your Father. But even the hairs of your head are all numbered. Fear not, therefore; you are of more value than many sparrows.”

The fact that God is intimately aware of our situation and willing to act on our behalf should be of great comfort to us all. First and foremost is the divine rescue of lost sinners who avail themselves of his saving work. But also, in our daily lives we can see the gracious hand of God at work.

Since I have already spoken of kittens and sparrows, let me close with the well-known 1905 hymn “His Eye Is on the Sparrow,” made especially famous when sung by Ethel Waters at Billy Graham crusades:

7 Replies to “Christmas: The Divine Rescue”