The new epic war film Dunkirk is doing quite well in the cinemas. I just went to see it, and it is well worth going to. It celebrates and commemorates one of the more amazing operations carried out during WWII. The story is this: as the Germans advanced through France in May 1940, Allied troops were trapped on the beaches of Dunkirk, on the northernmost coast of France, just next to Belgium.

On May 25 the War Office decided to evacuate British forces from there. With air and ground cover from British and French forces, troops were evacuated from the beach during nine days from May 27 to June 4. Every serviceable naval and civilian vessel that could be found was utilised. All up around 900 vessels were involved, with the majority of them owned and manned by civilians.

Over 338,000 men managed to escape on the 900 vessels, of which over 200 were sunk during the operation. The week-long event was called Operation Dynamo, and it was the largest evacuation in military history. As is often the case, films may not always fully line up with actual historical events. 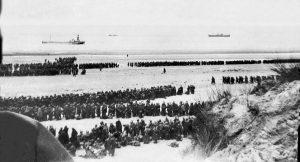 This one was pretty close, but at least two things were left out or downplayed. First, there were so many more civilians involved in this rescue effort than what the film let on. As mentioned, the bulk of the boats were owned and sailed by civilians, so we need to give them credit. Ordinary people can help change the course of history.

Second, the spiritual side of all this was left out. This was in fact a miraculous event, and plenty of prayer went into the effort. Often in times of great national crisis, dedicated public prayer is called for and heartily entered into. That was certainly the case here.

Just as the operation was to begin King George VI declared a national day of prayer while attending a special service in Westminster Abbey. Of interest, General Alan Brooke had said at the time that “Nothing but a miracle can save the BEF [British Expeditionary Force] now.” And this seems to have been just what happened.

It is said that the failure of Hitler and the Nazis to capture the British army at Dunkirk was one of the great turning points of the war. Had they been taken, the British may have had to surrender and the entire course of the war, and of history, would have been much different.

One writeup about this time of prayer is worth quoting from:

When Britain was close to defeat during the 2nd World War, and the entire British Army was trapped at Dunkirk, in desperation George 6th called for a National Day of Prayer to be held on 26th May 1940. In a national broadcast he instructed the people of the UK to turn back to God in a spirit of repentance and plead for Divine help. Millions of people across the British Isles flocked into churches praying for deliverance and this photograph shows the extraordinary scene outside Westminster Abbey as people queued for prayer. Two events immediately followed. Firstly, a violent storm arose over the Dunkirk region grounding the Luftwaffe which had been killing thousands on the beaches. And then secondly, a great calm descended on the Channel, the like of which hadn’t been seen for a generation, which allowed hundreds of tiny boats to sail across and rescue 335,000 soldiers, rather than the estimated 20-30,000. From then on people referred to what happened as “the miracle of Dunkirk”. Sunday June 9th was officially appointed as a Day of National Thanksgiving.

And Jonathon Van Maren has also just written about the “Miracle of Dunkirk”. He says in part:

Just as the trapped British soldiers on the beach seemed sure that they would be destroyed or captured by the oncoming Nazis, a British naval officer cabled three simple words to London: “But if not.”
Those three words tell us volumes about what it means to still be in possession of a Christian culture—they were derived from Daniel 3:17-18, the King James Version—which most Britons still heard in church and was still considered the pinnacle achievement of the English language. Those three words were spoken by the three brave friends of Daniel as they faced the scorching furnace of King Nebuchadnezzar, willing to be burned rather than serve an idol.
“Our God whom we serve,” they told him, “is able to deliver us from the fiery furnace, and he will deliver us out of thine hand, O king. But if not, let it be known unto thee, O king, that we will not serve thy gods, nor worship the golden image which thou hast set up.”
But if not. The British officer who sent those words to his superior fully expected them to understand where they came from in Scripture and what they would mean. God was yet able to deliver the British from what seemed a certain fate, but if not they would resist the Nazis with all their might. In three words, we get a glimpse of what a culture—derived from the word “cultus” or centre—actually looks like. That three seemingly innocuous words would be immediately recognized and their meaning understood shows again how far we are from there to here.

Everyone was amazed by the time the evacuation had ended. Instead of 20 or 30,000 rescued, well over 335,000 were. Winston Churchill gave a speech on June 4 calling this “a miracle of deliverance”. He concluded his speech with these words:

Although a terrific film, we had – typically – at least one rather moronic reviewer feeling the need to make a ludicrous PC point about the film. Brian Truitt, writing for USA Today, actually whined about the film not having major female characters nor “people of color.”

Thankfully John Nolte provided the necessary smackdown to this foolishness:

Where in the world do these freaks come from? Did Truitt do any homework about the background of this movie? He does appear to know that Nolan’s latest is based on a true story, which I guess is a start, but he probably learned that from the trailer. The real question, though, is just how clueless about history, about the biggest world event of the 20th century are you when you find it “jarring” that Wesley Snipes doesn’t show up to save the day or that Sandra Bullock is not driving a tank that will explode if it goes under 50 miles per hour?
Complaining about the lack of women and minority actors in a movie about Dunkirk is like complaining about the lack of Sinatra music in Straight Outta Compton or wondering why cancer failed to get equal time in Philadelphia or hectoring Hollywood over the omission of realistic sex scenes in the Toy Story trilogy.
And we cannot only blame Truitt, who is probably a victim of public schools. How did his trigger warning, one so feeble-minded it ranks as a non sequitur, make it past the USA Today editors? Are they all half-wits or does someone personally dislike Truitt so much they have stopped protecting him from himself?
Sorry if the following is inconvenient to your McCarthyistic desire to bully filmmakers into thinking and believing a certain way, but the settled science tells us the following: Trapped at Dunkirk were young, white males. Saving those young, white males were other white males. Trying to kill those young, white males were other white males.
Journalism is dead, and it was a suicide.

Let me finish with something a friend of mine recently posted on the social media:

We went with our son to see Dunkirk last weekend. I was reminded of a poem I studied in elementary school in Canada and did an internet search to see if I could find it. I did, and here it is. I love poetry, and this one captures the spirit of what was truly a miraculous event. Without the “little boats” the British (and French) armies would have been lost at Dunkirk, and England almost certainly have made peace with Hitler. The courage of ordinary people can change history.

A voice of terror through the land ran like a deadly frost:
“King Leopold has left the field, our men are trapped and lost.
No battleship can reach the shore, through shallows loud with foam;
Then who will go to Dunkirk town, to bring our armies home?”

From bustling wharf and lonely bay, from riverside and coast,
On eager feet came hurrying a strange and motley host,
Young lads and grandsires, rich and poor, they breathed one frantic prayer:
“O send us with our little boats to save our armies there!”

Never did such a motley host put out upon the tide:
The jaunty little pleasure boats in gaudy, painted pride,
The grimy tugs and fishing smacks, the tarry hulks of trade,
With paddle, oar, and tattered sail, went forth on their Crusade.

And on that horror-haunted coast, through roaring bomb and shell,
Our armies watched around them close the fiery fangs of hell,
Yet backward, backward to Dunkirk they grimly battled on,
And the brave hearts beat higher still, when hope itself was gone.

And there beneath the bursting skies, amid the mad uproar,
The little boats of Britain were waiting by the shore;
While from the heavens, dark with death, a flaming torrent fell,
The little boats undaunted lay beside the wharves of hell.

Day after day, night after night, they hurried to and fro;
The screaming planes were loud above, the snarling seas below.
And haggard men fought hard with sleep, and when their strength was gone,
Still the brave spirit held them up, and drove them on and on.

And many a grimy little tramp, and skiff of painted pride
Went down in thunder to a grave beneath the bloody tide,
But from the horror-haunted coast, across the snarling foam,
The little boats of Britain brought our men in safety home.

Full many a noble vessel sails the shining seas of fame,
And bears, to ages yet to be, an unforgotten name:
The ships that won Trafalgar’s fight, that broke the Armada’s pride,
And the little boats of Britain shall go sailing by their side!