We can learn much from ancient Israel:

Much is said in Scripture about the promised land – land of Canaan. Pretty much the entire biblical story line focuses on it one way or another. In the first book of the Bible it is promised to Abram, but hiccups along the way – including a 400-year stay in Egypt – delay the fulfilment of the promises. 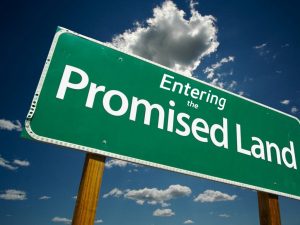 The Pentateuch tells us all about it, Joshua tells us about its occupation, Judges about problems living there, and the other historical books speak about the Monarchy, the golden years, decline, and exile. It’s quite a story. Here I want to look at just one small part of the story – and lessons for Christians today.

The book of Numbers especially focuses on the 40 years of wilderness wanderings, just prior to Israel entering Canaan. It is from this morning’s daily reading of the closing chapters from the book that the inspiration for this article has come – specifically chapters 32 and 33.

In ch. 32 we read about how two and a half of the twelve tribes wanted to stay behind, and not enter into Canaan. A key passage there is Num. 32:6-7: “Moses said to the Gadites and Reubenites, ‘Should your fellow Israelites go to war while you sit here? Why do you discourage the Israelites from crossing over into the land the LORD has given them?’”

After this strong word of rebuke, they agree to help take Canaan, and then they can be allowed to return to the other side of the Jordan. I discussed this matter last year when I had read that portion of Scripture. In the piece I offered some contemporary application: billmuehlenberg.com/2020/03/12/are-you-in-the-trenches/

But here I want to speak more to it. Much can be said about it, and many experts could be quoted concerning it. Here I want to draw upon just one resource: the 2006 expository commentary on the book by Iain Duguid. I was impressed by what he had to say, so it is worth sharing some of his comments about these two chapters.

As to ch. 32, he reminds us of the sins of the two and a half tribes: their desire for affluence and comfort, and so on, and notes how believers today can be just the same:

The key word in the first verse is the verb, “They saw.” Seeing in the Bible is definitely not believing. On the contrary, sight is often the exact opposite of faith. Seeing is frequently the prelude to bad decisions because our eyes tend to make superficial judgments. Eve “saw” that the fruit of the tree of knowledge was good….

The temptation to choose with our eyes rather than by faith is one that we also face. We are tempted to choose spouses based on looks rather than Christian character, or careers based on their income potential rather than the opportunity to use our gifts to serve our community. We are tempted to spend vast amounts of money on clothing, cars, and the accessories of an affluent lifestyle instead of investing our treasure in heavenly causes. Our affluence constantly poses a temptation to us to settle down here and invest ourselves in this world instead of setting our hearts on the things that are above.

Speaking more to the sin of choosing affluence over what is right, he says this:

Moses pointed out the likely impact of their desire to settle down outside the land on the rest of the Israelites. He reminded the Reubenites and the Gadites that their decision might well turn the hearts of the remainder of the Israelites away from the Promised Land (v. 7)….

It is the same way with our self-centered affluence. The decision to settle down comfortably to enjoy what we have, without any thought of God’s call on our lives, never simply affects ourselves. It affects our brothers and sisters in the church as well. Each of us has a part to play in setting the spiritual temperature of our own congregation. If I am cool toward God, comfortably satisfied with what I already have, then that coolness will dampen my neighbor’s enthusiasm for God. Equally, if I am on fire for the Lord, passionately pursuing a life of holiness and service, then something of that heat will radiate out to those around me. We never live our lives in a vacuum. Our commitment, or lack of commitment, affects the body as a whole.

As to Numbers 33, a key passage is found at the very end of the chapter. In verses 55-56 we read: “But if you do not drive out the inhabitants of the land, those you allow to remain will become barbs in your eyes and thorns in your sides. They will give you trouble in the land where you will live. And then I will do to you what I plan to do to them.”

Israel was often told by Yahweh to obey his instructions concerning the taking of Canaan. Failure to do all he had commanded would result in big problems. Duguid comments:

Sadly, Israel never lived up to their calling to persevere in holy war. By the end of the book of Judges, they had become completely like the peoples of the land in which they lived. Even in the book of Joshua, while the con­quest of the land was still in progress, we find hints of their failure to clear the Canaanites out. Consider the following verses:

“Could not,” “did not” — these terms do not sit comfortably in the Word of God. They do not belong as part of Israel’s vocabulary of holy war. But more striking still is the phrase in the last reference: “the Canaanites persisted in dwelling in that land.” The Canaanites were apparently more determined to live there than the Israelites were. The heathens had more determination to cling to their turf than the believers had to dispossess them. Even when the Israelites became stronger, they still did not obey fully the Lord’s com­mand and drive the Canaanites out but instead merely subjected the Canaanites to forced labor. It was certainly convenient to have someone do the dirty work for Israel, but the result was that the Canaanites remained as a continual source of temptation to the Israelites. The confrontation demanded by the Lord degenerated into unholy cohabitation.

Let me pause here for a moment, because just hours ago I spoke at a church and I said similar things. I was discussing the culture wars and the cultural Marxists and how the other side is dedicated, persistent and evangelistic in their activism. They have been hard at work for decades now to achieve their aims, while most of us in the church have been asleep at the wheel. The other side seems far more determined to win than we are. Duguid continues:

The same failure is evident when the boundaries assigned to Israel in Numbers 34 are considered. The area promised to Israel as their inheritance stretched from desert in the south to Lebo Hamath in the north and from the Mediterranean Sea in the west to the Jordan River in the east. This broad swath of land was never fully possessed by Israel. Even at the height of the Solomonic empire, they never succeeded in capturing the entire area assigned to them by God. The unbelief that had kept the previous genera­tion outside the land for forty years continued to dog Israel, leading them to settle for the status quo of the land they had already won instead of constantly pressing forward toward the full possession of the promise. Eventually their compromises with the nations around them and among them caught up with Israel: they were exiled from the land because of the idolatrous practices they had learned from the surviving Canaanites. The threat of Numbers 33:56 was not an empty one: like the Canaanites, Israel too would discover that there were consequences to their sin.

Like them, we have the Lord’s command not to compromise with the world around us. We are to be a “peculiar” people, as the old King James Version rendered Titus 2:14 and 1 Peter 2:9, different from our friends and coworkers, separate from the society in which we find ourselves. As Jesus put it: “If you were of the world, the world would love you as its own; but because you are not of the world, but I chose you out of the world, therefore the world hates you.” (John 15:19)

We are constantly tempted to make concessions and allowances for the world’s way of doing things instead of fully obeying God. As a result we often live compartmentalized lives in which what we say and do on Sunday has very little impact on what we say and do during the rest of the week. Monday through Friday, at school, at home, or in the workplace, we live just like the modern-day Canaanites, bowing down to the idolatries of our culture, while on Sundays we put on our Christian faces and pretend that we are single-mindedly following the Lord.

This may be a good place to conclude my quotation. Today I too was exhorting the people at church to make sure their faith was more than what happens on a Sunday morning. It needs to be something that makes a difference 24/7, and not just in our own lives, not just among God’s people, but in the world around us as well. I gave them a strong word about caring and getting involved.

I am meant to be speaking there again next Sunday, so we will see if anyone returns for Round Two! But we have here at least a couple of basic truths that we must keep in mind. One, we must regularly – daily – be in the Word of God. It is our daily bread which feeds and nourishes us spiritually.

And two, we must always apply to ourselves what we are reading. It does no good to think to yourself as you read books like Numbers that those ancient Israelites were a pretty hopeless bunch. We need to think instead about just how hopeless we are as well.

If we were in their shoes, we would have done just the same. So we always need to apply what we read to our own situation as much as we can. Sure, not everything found in the Old Testament had direct personal application to Christians today, but so very much of it does.

6 Replies to “Lessons From the Entry Into Canaan”