It can get lonely and discouraging doing pitched battle in the trenches:

In an age of computer-driven weaponry and long-distance warfare, the older methods of man-to-man combat is becoming less and less necessary. Why bother with one-on-one fighting when a remote-control guided cruise missile can take out an entire platoon in a matter of moments?

So talk of trench warfare may not be all that familiar with many of my modern readers. But let me discuss it a bit further anyway. This was of course a main form of fighting back in WWI. Here is a bit of description on this from one war history article: 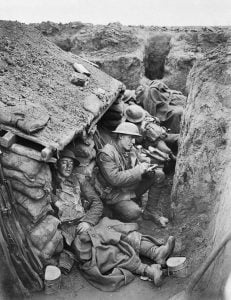 At least initially in World War I, forces mounted attacks from the trenches, with bayonets fixed to their rifles, by climbing over the top edge into what was known as “no man’s land,” the area between opposing forces, usually in a single, straight line and under a barrage of gunfire. Not surprisingly, this approach was rarely effective, and often led to mass casualties.

Later in the war, forces began mounting attacks from the trenches at night, usually with support of covering artillery fire. The Germans soon became known for effectively mounting night-time incursions behind enemy lines, by sending highly trained soldiers to attack the trenches of opposing forces at what they perceived as weak points.

If successful, these soldiers would breach enemy lines and circle around to attack their opponents from the rear, while their comrades would mount a traditional offensive at the front. The brutality of trench warfare is perhaps best typified by the 1916 Battle of the Somme in France. British troops suffered 60,000 casualties on the first day of fighting alone.

And conditions in the trenches were awful:

With soldiers fighting in close proximity in the trenches, usually in unsanitary conditions, infectious diseases such as dysentery, cholera and typhoid fever were common and spread rapidly. Constant exposure to wetness caused trench foot, a painful condition in which dead tissue spread across one or both feet, sometimes requiring amputation. Trench mouth, a type of gum infection, was also problematic and is thought to be associated with the stress of nonstop bombardment.

As they were often effectively trapped in the trenches for long periods of time, under nearly constant bombardment, many soldiers suffered from “shell shock,” the debilitating mental illness known today as post-traumatic stress disorder (PTSD). www.history.com/news/life-in-the-trenches-of-world-war-i

I mention all this because I want to use the term ‘trench warfare’ as a very apt metaphor for the spiritual battles we are in. Every single genuine Christian is in a war whether they know it or not – whether they want to be or not. It is totally unavoidable. To be a Christian means you have been thrown into pitched spiritual warfare, and the powers of darkness are arrayed against you. Thus you must put on the whole armour of God and engage with the enemy.

I am reminded of all this for several reasons. One, I am again reading the book of Joshua. This is all about the Israelites taking possession of Canaan, the promised land. On the one hand they had to go in and fight for the possession of it. But on the other hand, they were told by Yahweh that he was giving them the land. Consider just one passage which so clearly demonstrates this divine/human interplay – Joshua 1:1-11:

After the death of Moses the servant of the LORD, the LORD said to Joshua son of Nun, Moses’ aide: “Moses my servant is dead. Now then, you and all these people, get ready to cross the Jordan River into the land I am about to give to them–to the Israelites. I will give you every place where you set your foot, as I promised Moses. Your territory will extend from the desert to Lebanon, and from the great river, the Euphrates–all the Hittite country–to the Great Sea on the west. No one will be able to stand up against you all the days of your life. As I was with Moses, so I will be with you; I will never leave you nor forsake you. “Be strong and courageous, because you will lead these people to inherit the land I swore to their forefathers to give them. Be strong and very courageous. Be careful to obey all the law my servant Moses gave you; do not turn from it to the right or to the left, that you may be successful wherever you go. Do not let this Book of the Law depart from your mouth; meditate on it day and night, so that you may be careful to do everything written in it. Then you will be prosperous and successful. Have I not commanded you? Be strong and courageous. Do not be terrified; do not be discouraged, for the LORD your God will be with you wherever you go.” So Joshua ordered the officers of the people: “Go through the camp and tell the people, ‘Get your supplies ready. Three days from now you will cross the Jordan here to go in and take possession of the land the LORD your God is giving you for your own.’”

That God is giving them the land and that they have to take the land are both said repeatedly not just in the book of Joshua but throughout much of the Pentateuch as well. God is giving the land to the people as a gift, but they must go in and take possession of it.

And all this is also a type of the Christian life: God by his grace gives us what we need to fully grow in Christ and become what we are meant to be. But at the same time, we are meant to act, to take steps to make this a reality. It is a cooperative effort. See more on this here: billmuehlenberg.com/2020/02/28/cooperating-with-god/

But a second reason for my article is this: I just looked up something on my site as part of a response to someone else on the social media. With well over 5000 articles on this site (this one is the 5061st), I often do not need to go far to find something that I need – I have usually written about it already in the past!

So as I found some articles to share in this online discussion, it suddenly occurred to me that I have been slugging it out in the culture wars for a long time now. CultureWatch began 14 years ago, but I have been involved in these sorts of battles for at least 35 years now – the last 31 years being here in Australia.

So I have spent a fair bit of time in the trenches. I have experienced quite a few battles over the decades. I have plenty of old wounds and scars to show for my time at the front. I have plenty of enemies who have been and still are arrayed against me. Thus I do know a bit about what trench warfare (metaphorically speaking) is all about.

While I do not expect all Christians to be engaged in the culture wars – at least not as much as I am – I do expect that they all should be aware of some of the key battles and should be supporting those who are called to be involved in trench warfare.

Of course I realise that I am not all alone in the trenches, thankfully. God has raised up a number of other brave fighters who are fully engaged. I know it is woefully remiss of me to name names, because so many could be mentioned. Forgive me then, but let me run with just three: the former and current heads of the Australian Christian Lobby: Jim Wallace, Lyle Shelton and Martyn Iles. Champs all three, as are many others.

But still, far too many Christians are sitting on the sidelines. Too many are just wanting to sit all this out, and leave the fighting to a handful of other Christians. Too many believers are either too cowardly or too unconcerned about the battles taking place all around them.

This should not be my friends. We all have a role to play. At the very least, we all can be praying. We all have various gifts, talents and callings that God has given us that should be used in the many wars happening all around us. We dare not try to remain neutral in a time of war.

Let me finish with two quotes. The first is from Numbers 32:6-7: “Moses said to the Gadites and Reubenites, ‘Should your fellow Israelites go to war while you sit here? Why do you discourage the Israelites from crossing over into the land the LORD has given them?'”

The second is from Tolkien’s The Two Towers, part of The Lord of the Rings trilogy (at least the film version of it):

So who will join me in the trenches? It can get a bit lonely out there, and having some fellow warriors by my side would encourage me greatly. Who is with me?

24 Replies to “Are You in the Trenches?”