The film Amazing Grace, the story of Wilberforce and the abolition of slavery, has opened in cinemas across Australia. The film, despite some shortcomings, is well worth seeing. One of the chief drawbacks of the film is the decided underplaying of the strong Biblical and evangelical convictions that inspired and sustained Wilberforce and his colleagues as they fought the slave trade. Yet Amazing Grace does help to remind us that one man, committed to Christ, can make an enormous difference.

Of course Wilberforce was not alone in the fight against slavery, and there were a number of factors that entered into the abolitionist cause. Just one of these factors worth mentioning is the conversion of John Newton. The English slave ship captain underwent a powerful conversion to Christ beginning in 1748 and maturing in the 1750s. Thus he still captained slave ships for some years, but he gave away seafaring in 1754. He became active as an Anglican clergyman and hymn writer. He is best known for penning the great hymn, Amazing Grace, along with many others. He moved to London in 1779, where he and Wilberforce would work together. 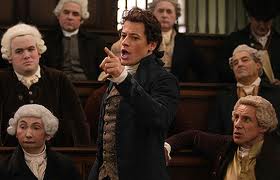 For several decades after his conversion he tended to avoid the slavery issue, in part because he believed that as a clergyman he should not be involved in political disputes. But those concerns eventually receded, and he proved to be an invaluable ally to Wilberforce, both as a spiritual counsellor, and as a source of information about the slave trade. Indeed, his 1788 book, Thoughts Upon the African Slave Trade, based upon his first-hand experience, proved to be an invaluable resource for Wilberforce and the abolitionists. Newton died in December 1807, the year the Abolition Act was passed.

Amazing Grace is a good introduction to Wilberforce and the abolitionists, but it needs to be supplemented with further reading, and a number of good books exist on the topic, to help round out the picture. But both the film and the literature offer us important inspiration and instruction today.

The work of Wilberforce and the Clapham Sect (the group of evangelical activists based in Clapham near London) contains many important lessons for contemporary Christians. Here are seven key lessons:

One. For the believer, there should be no separation between sacred and secular. Spiritual work can be accomplished as much in politics as in the pulpit. Wilberforce was fully motivated by Christian conviction, and he was involved in various “spiritual” works, such as Sunday school societies, the Bible Societies, Jewish missions, and various missionary societies. But he is perhaps best known for his political activism. He saw all work performed for Christ and his kingdom as important and spiritual, not just some. All in all, he was involved in 70 different societies, which embraced both “religious” and more humanitarian concerns. His Christian faith led him directly to activism in the public arena.

Two. Prayer and activism must go together. The Clapham Sect certainly prayed about their cause. But they did all the hard work as well, knowing that activism and prayer must run in tandem. Thus they were real activists, fully researching their subjects, gathering petitions, making speeches, raising funds, awakening the conscience of the general public, as well as fellow Parliamentarians, and so on. They put feet to their prayers, in other words, and were hugely successful as a result.

Three. Working together with others to achieve an important goal is vital. A major reason why the evangelical abolitionists succeeded was because they were willing to work as part of a wider network of forces opposed to slavery. Thus they recognised the great value of cobelligerents, of working with others of quite different persuasions, but united – even if temporarily – for a common purpose. Wilberforce wrote that “bringing together all men who are like-minded” is “a principle I hold to be of first-rate importance”. It is a principle we need to adhere to as well.

Four. Perseverance is essential. Wilberforce formed an Abolition Committee in 1787, and made his first speech on the evils of slavery in 1789. Year after year he introduced his bill to see slavery ended. Year after year he met with failure and rejection. Eleven times the abolitionists were out-voted, once by just seventeen votes.

It was not until March 1807 that the Abolition Bill was finally enacted. And it was not until 25 July 1833 that the Emancipation Act was passed, four days before Wilberforce died. Thus he had to spend nearly 50 years in this work before real victory was achieved. Wilberforce was not a quitter. Neither should we be.

Five. Be prepared for strong opposition. The abolitionists faced huge obstacles, with many powerful vested interests – especially economic – arrayed against them. Even the Established Church was often railing against them. They were regularly derided and ridiculed in Parliament and elsewhere, and were mockingly referred to as “The Saints”. Yet they kept going, despite the intensity of the opposition and the ferocity of the attacks. All important work for God will encounter opposition, and those involved in it will face persecution and villainy. But that is the cost we must pay for doing right.

Six. A sense of calling is vital. Knowing that you have a divine calling for the difficult tasks you undertake provides a real anchor, especially when faced with adversity, opposition, self-doubt and loneliness. Wilberforce knew he was called for this task. He could write in his diary in 1787: “God Almighty has set before me two great objects, the suppression of the slave trade and the reformation of manners.” And he undertook these works with great energy and passion, knowing he was divinely appointed and commissioned.

And he had others who encouraged him along the way. A letter by John Wesley in 1791 is a great example: “Unless the divine power has raised you up to be as Athanasius contra mundum, I see not how you can go through your glorious enterprise in opposing that execrable villainy, which is the scandal of religion, of England, and of human nature. Unless God has raised you up for this very thing, you will be worn out by the opposition of men and devils. But if God is with you, who can be against you? Are all of them stronger than God? O be not weary of well doing! Go on, in the name of God in the power of His might, till even American slavery (the vilest that ever saw the sun) shall vanish away before it.”

Seven. God’s work almost always seems to be done by a minority. The idea of a remnant, of a select few, who battle against the odds, is a theme repeated throughout Scripture. Whether we consider David against Goliath, or Gideon against the Midianites, God seems to prefer working with a few to confound the many. This was certainly true of Wilberforce. He never had more than 20 to 30 committed helpers during his five decades fighting slavery.

In sum, there is much we can learn from Wilberforce and his battle against slavery. We can take heart from his life and work, especially those involved in the difficult culture wars that engulf us. As I often tell audiences when speaking about seemingly intractable problems like abortion, we need to persevere as Wilberforce did.

So we must persist, and the life of Wilberforce needs to be ever at the forefront of our hearts and minds. As Paul rightly reminds us, let us not grow weary in well-doing.