Much ink has been spilled on the ethics of civil disobedience, and whether it is ever justified. People of various belief systems have struggled with the question – both Christian and non-Christian. I have already weighed in on the debate in an earlier article: https://billmuehlenberg.com/2008/11/02/christians-and-civil-disobedience/

Since I there cover most of the biblical material, I will not repeat it here. But I do want to discuss the issue further, especially in regard to the issue of abortion. How much should believers engage in civil disobedience to save the lives of unborn babies headed for the slaughter?

We have various biblical passages which emphasise standing up for the defenceless and the innocent. A classic text is Proverbs 31:8: “Speak up for people who cannot speak for themselves. Protect the rights of all who are helpless”. The KJV renders this passage this way: “Open thy mouth for the dumb in the cause of all such as are appointed to destruction”.

And of course the Sixth Commandment clearly teaches, “You shall not murder”. So what obligation do believers have when we are aware of the murder of the innocent? This is not a new question by any means. Martin Luther wrestled with this nearly 500 years ago. He said this about the Sixth Commandment in his Large Catechism:

“This commandment is violated not only when a person actually does evil, but also when he fails to do good to his neighbor, or, though he has the opportunity, fails to prevent, protect, and save him from suffering bodily harm or injury. If you send a person away naked when you could clothe him, you have let him freeze to death. If you see anyone suffer hunger and do not feed him, you have let him starve. Likewise, if you see anyone condemned to death or in similar peril and do not save him although you know ways and means to do so, you have killed him. It will do you no good to plead that you did not contribute to his death by word or deed, for you have withheld your love from him and robbed him of the service by which his life might have been saved. Therefore God rightly calls all persons murderers who do not offer counsel and aid to men in need and in peril of body and life.”

Very interesting thoughts, which certainly have direct application to the abortion debate. If we know that unborn babies are being killed at the abortion clinic down the road, what is our response to be? Do we have an obligation to stop the slaughter? Should we be willing to violate human laws if need be to rescue the dying?

There are no easy answers to these questions, and pro-lifers are split on the issue. Some see any such activities as counterproductive and harmful to the prolife cause, while others argue that we must take radical action such as this, or the babies’ blood will be on our hands. I cannot here resolve this important and complex debate. 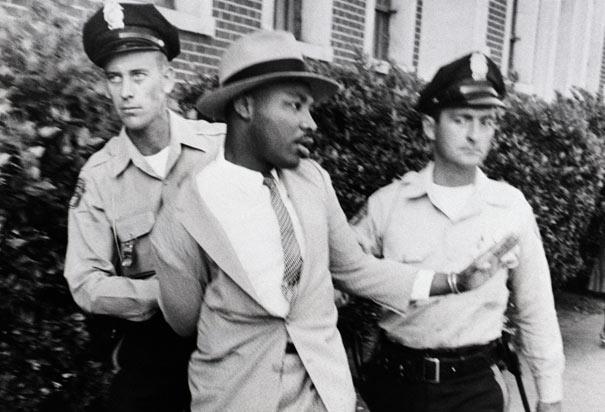 But let me focus on one more aspect of this. We know that during the US civil rights struggle of the 1960s, various public actions were undertaken to fight unjust discrimination. Usually non-violent means were used, but often protestors were willing to violate the law – and suffer the consequences – in order to stand up for the civil rights of Black Americans.

Martin Luther King, Jr., for example put it this way: “An individual who breaks a law that conscience tells him is unjust, and who willingly accepts the penalty of imprisonment in order to arouse the conscience of the community over its injustice, is in reality expressing the highest respect for the law.”

One leading pro-lifer in the US, Randall Terry, has very much been involved in direct action against abortion. He has often cited the example of the civil rights workers. He was just recently arrested as he protested over the decision of Notre Dame to award President Obama with an honorary law degree. The university of course is a (at least nominal) Catholic university, and many Catholics are outraged that this university should give such honours to arguably one of the most pro-abortion Presidents ever.

Terry says this about his actions: “We are following the example of Dr. King and the civil rights movement. They deliberately created social tension in order to expose the grave evil of segregation. Obama’s promotion of killing the innocent is far more evil than segregation; therefore, how can we react with less clarity, valor, and tension?”

And he has challenged those who dislike his tactics: “I fear for ‘pro-life Catholics’ who condemn our actions; I fear for lukewarm clergy who look askance at our measures; I fear for ‘Catholic press’ that lacks the courage or integrity to even cover our activities, is embarrassed by our tactics, ashamed at our boldness, and seduced to silence by the fear of men. Yes: we will stand trial for ‘trespass;’ but the arrogant and the fearful in the Church Militant that ‘trespass against us’ by denigrating what it means to be militant are on trial as well.”

Strong words indeed. And bear in mind that for the moment I neither condemn nor condone such thoughts and actions. But they do raise many vital questions which all biblical Christians must carefully and prayerfully ponder.

Indeed, an appeal to the earlier American abolition movement is also often made by pro-lifers. They remind us for example of what abolitionist Frederick Douglass said a century and a half ago: “If there is no struggle, there is no progress”. They remind us of John Brown and the Underground Railroad. They remind us that in times of moral crisis sometimes extreme actions are needed.

Another pro-lifer is also in the news, and he likewise is urging people to be willing to stand up for their convictions, even if it means facing jail terms. This is how one news release puts it: “Dr. Alan Keyes, who ran for the U.S. Senate in 2004 against Barack Obama, has announced plans to come to Notre Dame to be arrested for protesting Obama’s address and honorary doctorate at Notre Dame’s graduation. Dr. Keyes urges pro-life compatriots around the country to join him, as a witness against Notre Dame’s betrayal of the babies, and in the hope that President Obama will be cancelled.”

This is part of what Keyes has said about his actions: “I will go to South Bend. I will step foot on the Notre Dame campus to lift up the standard that protects the life of the innocent children of this and every generation. I will do it all day and every day from now until the Master comes if need be, though it mean I shall be housed every day in the prison house of lies and injustice that Obama, Jenkins and their minions now mean to construct…

“If this be trespass, then forgive us our trespasses and join us in trespassing until the South Bend jail is filled to overflowing with witnesses to truth; filled beyond capacity; filled until we break the most onerous shackles of all – the ones that bind the heart and mind to evil and our nation to the path of its destruction…

“I ask others who all these years have prayed and labored for the unborn to join us. I know you are there. I have broken bread with you at dinners for crisis pregnancy centers and right to life groups. I have marched with you to proclaim the sanctity of innocent life, and decry the laws that sanction its destruction. I have been uplifted by your faith, your perseverance, your love of God and His Son. The forces of evil mean to lay final claim to a place supposed to be within the precincts of our God and Lord. Come what may, we must come forth now to occupy and hold it against them.”

Stirring words, and a resolute call to action. Again, I have not even fully made up my own mind as to what is the right way to approach these matters. As I mentioned, some Christians abhor all lawbreaking, while others argue that it is the duty of every Christian to resist unjust laws.

In my earlier article I laid out some of the biblical ground rules about such things. But it still takes much contemplation, prayer and seeking the face of God to determine how we must act in such situations. However, at the very least, we can commend people like Terry and Keyes for the courage of their convictions, and we can certainly keep them covered in steadfast and fervent prayer.

And may the Lord grant all of us both courage and wisdom as we each ask ourselves, “How do you want me to respond Lord to this grievous evil of abortion?”

61 Replies to “Abortion and Civil Disobedience”