Sure, we are all responsible before God for our own spiritual growth, but God does hold leaders accountable for the condition of their flock. If the leaders are not where they should be, then the congregation will often not be where it should be either.

Thus the pastor and/or Christian leader has a very heavy responsibility to be all he or she can be in Christ, and to lead by example. Thus Paul could say, ‘follow me as I follow Christ’ (1 Cor. 11:1). Leaders do need to set the example, and when they are not doing this, the whole Body suffers.

As A. W. Tozer put it, “I trust I speak in charity, but the lack in our pulpits is real. Milton’s terrible sentence applies to our day as accurately as it did to his: ‘The hungry sheep look up, and are not fed.’ It is a solemn thing, and no small scandal in the Kingdom, to see God’s children starving while actually seated at the Father’s table.”

With all that in mind I want to recommend to you a somewhat older sermon. I must have first heard it over 30 years ago on an audio cassette. I could not recall the name of the preacher, or the title of the message. All I had in my memory bank was a three-word phrase, “monsters of iniquity”. 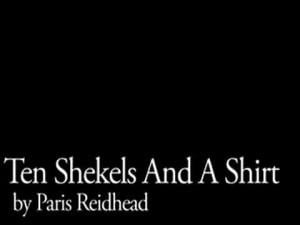 While that might seem to be a rather strange phrase to harbour in one’s memory all these decades, there is a reason for it. The sermon had to do with the basics of the gospel: the reality of sin and the nature of biblical conversion. It had a lot to do with how we are watering down the message of the gospel, and seeking more to please men than to please God.

Anyway, with the wonderful world of Google, I entered those three words into the search field, and I soon found what I was looking for. The sermon was entitled “Ten Shekels and a Shirt” and the preacher was Paris Reidhead. He was an American pastor, missionary and Bible teacher (1919-1992). This sermon is perhaps his most famous, and for good reason. It is spiritual dynamite.

The audio sermon can be heard here: www.ferventinspirit.com/audio/Ten%20Shekels%20and%20a%20Shirt.mp3

The full manuscript of the sermon can be read here: www.parisreidheadbibleteachingministries.org/tenshekels.shtml

I highly recommend that you utilise both simultaneously. That is, it will be of great benefit if you read the transcript as you listen to the audio. It is a very powerful and moving message, one which will greatly challenge and convict all of us.

After you have listened to/read the sermon, some questions will then be worth asking: When is the last time I heard a sermon like this? When is the last time such a topic was preached on in my church? How does the passion and Holy Spirit unction (there’s an old word which some of you may still recognise) of this speaker compare with preachers I listen to today?

I of course am not asking you to run down your own pastor or church. But I am asking that we all seek to set the bar higher, that we strive to go further with God, and that we do not settle for second best. The great value of hearing such preaching is that it spoils us. It makes us unhappy with the mediocre and the mundane.

To whet your appetite, let me reproduce a few choice paragraphs from this powerful sermon. I do not mean to let these nuggets act as a substitute for the whole message. I strongly urge you all to take the time to read and listen to the full message. But these parts of the sermon will hopefully encourage you to enjoy the entire talk.

His sermon has to do with an Old Testament passage involving a young man, Micah, and a Levite, as recorded in Judges 17-19. You can read those chapters or listen to the sermon to get the background context.

But the point Reidhead is trying to make is that we can do things for God in His way, or in humanistic ways. The former will always bring life, while the latter will always bring death. Much of our preaching today is sadly of the latter variety. We have allowed Humanism to contaminate our gospel, as we preach to men about the benefits they will receive, instead of making our appeal Christocentric.

Thus we offer a man-centred gospel, instead of a God-centred one. It is a pragmatic gospel. Says Reidhead, “The question comes then to this, what is the standard of success and by what are we going to judge our lives and our ministry? And the question that you are going to ask yourself, ‘Is God an end or is He a means?’”

He recalls his own missionary work in Africa, and how he in fact employed a humanistic gospel: “If you’ll ask me why I went to Africa, I’ll tell you I went primarily to improve on the justice of God. I didn’t think it was right for anybody to go to Hell without a chance to be saved. So I went to give poor sinners a chance to go to heaven. Now I haven’t put it in so many words, but if you’ll analyze what I just told you do you know what it is? Humanism. That I was simply using the provisions of Jesus Christ as a means to improve upon human conditions of suffering and misery. And when I went to Africa, I discovered that they weren’t poor, ignorant, little heathen running around in the woods looking for someone to tell them how to go to heaven. That they were monsters of iniquity! They were living in utter and total defiance of far more knowledge of God than I ever dreamed they had!”

He continues, “What about you? Why did you repent? I’d like to see some people repent on Biblical terms again. George Whitefield knew it. He stood on Boston Commons speaking to twenty thousand people and he said, ‘Listen sinners, you’re monsters, monsters of iniquity! You deserve Hell! And the worst of your crimes is in that criminals though you’ve been, you haven’t had the good grace to see it!’ He said, ‘If you will not weep for your sins and your crimes against a Holy God, George Whitefield will weep for you!’ That man would put his head back and he would sob like a baby. Why? Because they were in danger of Hell? No! But because they were monsters of iniquity, who didn’t even see their sin or care about their crimes. You see the difference? You see the difference? The difference is, here’s somebody trembling because he is going to be hurt in Hell. And he has no sense of the enormity of his guilt! And no sense of the enormity of his crime! And no sense of his insult against deity!”

He discusses the great revivalists, and how people fell under the conviction of sin as they heard their preaching. He then mentions this amazing preacher and the remarkable impact that he had:

“This phenomena also happened in America in the 18th century at Yale University during the time of John Wesley Redfield. Outdoor evangelistic meetings were held in the amphitheater at Yale University. Policeman controlling the crowds were cautioned to delineate between the common drunk, whose alcohol breath betrayed him (and he was locked up for drunken behavior). Those who had been smitten by God were diagnosed as having ‘Redfield’s disease.’ They were removed to a quiet place until they returned to consciousness. Lives were transformed – men if they had been drunkards, stopped drinking; cruel persons changed; immoral people gave up immorality. Thieves repented and returned what had been stolen. Men and women had seen the holiness of God and the enormity of their sin. The Spirit of God had driven them down into unconsciousness because of the weight of their guilt. Somehow in the overspreading of the power of God, sinners repented of their sin and came savingly to Christ.”

He closes with a most moving and amazing story of two young Moravian missionaries who paid the ultimate price to save other sinners. You must read or listen to the end of his sermon and see what these two young men did for, and in the name of, Christ.

To be honest, such preaching is so foreign to our way of thinking, and is so rarely heard in our pulpits today, that it may not only sound strange and alien, but many of you might even think it is far too severe and far too harsh. But can I suggest that the problem may well lie with us, not with Reidhead.

We have grown accustomed to a soft and mushy gospel which challenges no one, which makes no demands of us, and which seeks to please men. What is desperately needed today are Christian leaders who will want only one thing: to please God, and to revive a sleeping and comatose church.

As John Wesley pleaded, “Give me one hundred preachers who fear nothing but sin, and desire nothing but God, and I care not a straw whether they be clergymen or laymen; such alone will shake the gates of hell and set up the kingdom of heaven on earth.”

26 Replies to “We Need to Hear Preaching Like This”