Hollywood has a big problem. It is constantly facing a major dilemma involving two well-established facts. Fact number one: The denizens of Hollywood are overwhelmingly secular leftists. They mostly are well left of centre, generally despise people of faith, and usually push radical social engineering agendas.

Fact number two: More often than not, the best money-making films are those with a pro-faith and pro-family message. Films reflecting the Judeo-Christian worldview, and/or emphasizing traditional values tend to regularly be the big box office winners. 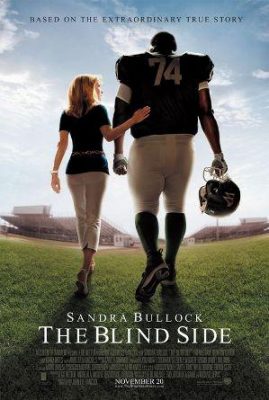 Since the Hollywood crowd is very keen about making money, what are they to do? The bulk of Americans are conservative, Christian and strong family types. Yet the Hollywood elite prefer to slam those values in their films.

But if they want to get rich and stay rich, then they have to cater to the tastes of most Americans. They really are in a dilemma. But love of money tends to triumph over pushing radical leftist agendas, so family-friendly films still keep coming out of Hollywood.

The most obvious recent case of this is The Blind Side which just saw the film’s main star, Sandra Bullock, win the Oscar for Best Actress. Being based on a true story makes it an even more powerful film, centring on the twin themes of a strong faith and a strong family.

Of course this is Hollywood, so the film is not perfect, yet the Christian and family themes come through quite strongly in this film. As mentioned, it must leave many Hollywoodians in a real bind: getting rich off a decent film which does not bag family or faith.

Those not familiar with the story are encouraged to go see the film, to help send Hollywood the message that they should be making more of these sorts of movies. But a quick plot summary can be provided here: A wealthy white family in America’s south takes into their hearts and home a poor struggling black youth.

Their love, support and dedication results in him going on to become a leading successful NFL football player. Without their tremendous love and concern, he very likely would have ended up as just another sad statistic; another young person with a life tragically cut short.

This is quite a breath of fresh air. So often Hollywood portrays both families and faith as wretched, destructive and ugly affairs. Families are usually depicted as dysfunctional, psychopathic freak shows, and Christianity is usually denigrated, slammed and mocked.

To see both coming out as clear winners is quite astounding really. And that is why it has done so very well at the box office. The truth is, the majority of Americans relate to such families. Indeed, the truth is even more profound: there exist millions of families just like the family featured in this film.

Many, many millions of strong, functional, loving, and faith-based families can be found in the US, and around the world. They see their story in this film. They know this is what the real America is like. They are sick and tired of seeing their faith denigrated and their family lives mocked in most other films.

One article about the film compared the heroine of the film with Sarah Palin. And indeed, the two are in many respects quite alike – which makes this film even more remarkable. For the secular left, the most hated woman in America today is clearly Sarah Palin.

Thus for Hollywood – the very heartland of the secular left – to actually make a film which celebrates and glorifies a Sarah Palin twin must be one of the most ironic and perplexing things to come out of Tinseltown in a very long time.

But who cares about what internal agonies and contradictions they are experiencing. The truth is, they actually got things right for a change. We all know there are dysfunctional families, and Christians who have been a lousy witness to their Lord.

But there are also millions of very healthy families, and millions of very committed and Christ-like Christians. It is about time Hollywood woke up to this reality. And even though it may not like it, if it wants to continue with such box-office hits, it should stay on this winning formula and not go back to its tired old ways.

I encourage all of you to go see the film. We all need affirmation and encouragement, as well as inspiration and uplifting. This film will help remind you that faith is vitally important, and that vibrant, healthy families can and do exist. So in this case at least, hooray for Hollywood.

31 Replies to “The Blind Side and Hollywood’s Dilemma”