This is a topic not often heard in today’s churches, and when it is, it is often misunderstood. Many believers think it has no place in contemporary Christianity, and if it is mentioned, it is usually with the disclaimer, “Oh, it really just means respect”.

Thus it is worth looking at this concept in more detail. And with such terminology, a cursory understanding of the original languages is certainly in order. In Hebrew there are a number of terms used. The main noun is yira or mora, and the main verb is yare.

In the New Testament the main Greek term is phobos and phobeo (noun and verb respectively). Context of course in large measure determines how we understand the terms. There is fear of death, fear of man, fear of the unknown, and so on. Here we are concentrating on the fear of the Lord.

Eugene Merrill says this about the terminology: “While the normal meaning of fear as dread or terror is retained in the theological use of the terms, a special nuance of reverential awe or worshipful respect becomes the dominant notion.”

Tremper Longman seeks to summarise the biblical data: “‘Respect’ may not do justice to the gravity of the word, though ‘fear’ may connote an unhealthy dread. Still, the object of fear is the Creator of all, the one who is sovereign over his creation. Those who experience fear in his presence know their rightful place in the universe. An English word that may be a candidate for translation is ‘awe,’ understood as veneration of the sacred.”

There are numerous references to the fear of God in Scripture. It is true that in the NT, our relationship with Jesus enables us to be called friends by our Lord. But as C.S. Lewis reminds us in The Lion, The Witch and The Wardrobe, Aslan (the Christ figure) is not tame, or safe: 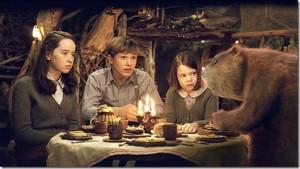 “‘Is – is he a man?’ asked Lucy. ‘Aslan a man!’ said Mr. Beaver sternly. ‘Certainly not. I tell you he is the King of the wood and the son of the great Emperor-Beyond-the-Sea. Don’t you know who is the King of Beasts? Aslan is a lion, the Lion, the great Lion.’ ‘Ooh,’ said Susan, ‘I thought he was a man. Is he – quite safe? I shall feel rather nervous about meeting a lion.’ ‘That you will, dearie, and make no mistake,’ said Mrs. Beaver; ‘if there’s anyone who can appear before Aslan without their knees knocking, they’re either braver than most or else just silly.’ ‘Then he isn’t safe?’ said Lucy. ‘Safe?’ said Mr. Beaver; ‘don’t you hear what Mrs. Beaver tells you? Who said anything about safe? ‘Course he isn’t safe. But he’s good. He’s the king I tell you’.”

While we can have a personal love relationship with God because of what Christ has done for us, the Creator/creature distinction never becomes inviolate. We still approach him with all the awe and reverence that the King of the Universe is due.

Those who do not come to God through Christ have only a genuine terror of the Lord to deal with. As one author notes, “Although there is a desirable reverential fear of God, the Bible also portrays God’s actions as being causes of terror, especially – but not only – for those who do not trust in God.”

Or as Merrill states, “There are, thus, two sides of the fear of the Lord – that which produces awe, reverence, and obedience, and that which causes one to cower in dread and terror in anticipation of his displeasure.”

It may be worth looking at just one particular passage to round out this discussion. Consider Philippians 2:12: “Therefore, my dear friends, as you have always obeyed—not only in my presence, but now much more in my absence – continue to work out your salvation with fear and trembling.” Leaving aside the contentious issue of working out one’s salvation (but see verse 13 for the full context), what is this ‘fear and trembling’ all about?

Gordon Fee offers this commentary: “If the whole universe of created beings is someday (soon, from their perspective) to pay homage to their Lord, then they themselves need to be getting on with obedience (= working out their salvation) as those who know proper awe in the presence of God. One does not live out the gospel casually or lightly, but as one who knows what it means to stand in awe of the living God.”

Yes, the blend of love and fear, even if hard to reconcile, are indeed the twin components of the believer’s walk with God. As A.W. Tozer puts it, “The love of Christ both wounds and heals, it fascinates and frightens, it kills and makes alive, it draws and repulses, it sobers and enraptures. There can be nothing more terrible or more wonderful than to be stricken with love for Christ so deeply that the whole being goes out in a pained adoration of His person, an adoration that disturbs and disconcerts while it purges and satisfies and relaxes the deep inner heart.”

Or as Tozer says elsewhere: “Christ can never be known without a sense of awe and fear accompanying the knowledge. He is the fairest among ten thousand, but He is also the Lord high and mighty. He is the friend of sinners, but He is also the terror of devils. He is meek and lowly in heart, but He is also Lord and Christ who will surely come to be the judge of all men. No one who knows Him intimately can ever be flippant in His presence.”

John Stott put it this way: “The fear of God is a profound respect for His holiness, which includes a fear of the consequences of disobeying Him. It shouldn’t scare us out of our wits; it should scare us into them.” Quite so. And R.C. Sproul offers this perspective:

“We are called to fear God, and Luther described that fear, not as a servile fear, like that of a tortured prisoner for his tormentor, but as a filial fear, similar to that which we have for a parent whom we love and do not want to disappoint. It is not that we fear the loss of certain privileges or other punishment, but that we do not want to displease the parent.”

I conclude with more wise thoughts from the pen of Tozer, as he discusses ‘The Terror of the Lord’:

“No one can know the true grace of God who has not first known the fear of God. . . . The presence of the divine always brought fear to the heads of sinful men. Always there was about any manifestation of God something that dismayed the onlookers, that daunted and overawed them, that struck them with a terror more than natural. This terror had no relation to mere fear of bodily harm. It was a dread consternation experienced far in toward the center and core of the nature, much farther in than that fear experienced as a normal result of the instinct for physical self-preservation. I do not believe that any lasting good can come from religious activities that do not root in this quality of creature-fear. . . . The effort of liberal and borderline modernists to woo men to God by presenting the soft side of religion is an unqualified evil because it ignores the very reason for our alienation from God in the first place. Until a man has gotten into trouble with his heart he is not likely to get out of trouble with God.”