There are always plenty of twisted teachings and dodgy doctrines circulating in our churches. One is known as the Prosperity Gospel or the Health and Wealth Gospel. This has been quite popular in many circles for several decades now.

This teaching claims that all Christians should be well-off: materially, financially and even socially. Success and wealth are the birthrights of God’s children. We simply need to claim the victorious and successful life that has been promised us. Those who find themselves in poverty and hardship are living an unnecessary life of defeat. Such people need to redirect their thinking, strengthen their faith and expect a blessing. They need to claim the promises, walk in faith, and (as is often suggested) contribute their tithes and offerings to the prosperity ministries in order to release their own personal blessing and success. 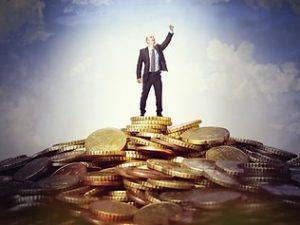 Here I wish to simply look at some of the favorite passages appealed to by these teachers. One of the most popular passages marshaled in support of this doctrine is 3 John 1:2: “Beloved, I wish above all things that thou mayest prosper and be in health, even as thy soul prospereth” (KJV).

The term ‘prosperity gospel’ is largely based on this passage. Newer translations clear up some of the confusion. The key phrase translated ‘mayest prosper’ in the KJV comes from the Greek word euodousthai which is the compound of eu, good, and odos, way or road. The verb here literally means “to be led along a good road” or “to have a good journey.” Its metaphorical meaning is to succeed, to prosper.

In verse 2b John in effect repeats what he wished of Gaius in 2a: physical health along with spiritual health. John’s desire is that Gaius may do well, in body as well as spirit. As such, the terms used here, along with the term translated “be in health” are standard expressions of good will: both “verbs belonged to the conventional language of letter writing” as John Stott notes. Thus we cannot read into this passage a prosperity gospel.

Interestingly, one of the leading American televangelists and prosperity gospellers, Jim Bakker, has admitted that for many years he had wrongly interpreted this passage: “I had preached on this verse for most of my ministry. It seemed to say exactly what I had believed: that God wanted His people to prosper. And I interpreted it to mean prosper financially and materially; in other words, to get rich.”

It was only when he lost everything – his ministry, his mansion, his millions, and his mate – and was languishing in prison that he came to see the real meaning of this and other passages. With hindsight he came to see that he never “really examined the true meaning of the text. . . I simply pulled the verse out of context and used it to justify my God-wants-you-rich theology”. His turn-around on this issue has been quite remarkable. He now even goes so far as to say that “the teaching and preaching of materialism is the most abominable thing that has happened within Christianity in the past three decades”.

A number of passages that have to do with giving are also appealed to in what has come to be known as the doctrine of “seed-faith giving”. Consider Luke 6:38: “Give, and it will be given to you. A good measure, pressed down, shaken together and running over, will be poured into your lap. For with the measure you use, it will be measured to you”. The immediate context of this verse (6:37-42) is judging others and forgiveness. Thus giving in the sense of extending mercy may be in mind here as much as any consideration of material giving.

And the wider context of this passage (6:27-36, love your enemies) makes it clear that we should do what is right regardless of any hope for a reward (v. 35a: “But love your enemies, do good to them, and lend to them without expecting to get anything back”). Thus this passage cannot be used in the way the prosperity gospellers do, since their whole emphasis is on giving so that God can give back to you even more. We might get a material return on our acts of kindness, but our eternal reward should be a sufficient motivation.

Another passage often appealed to is 2 Cor. 9:6: “Remember this: Whoever sows sparingly will also reap sparingly, and whoever sows generously will also reap generously”. The context is the collection for the poor saints in Jerusalem (1 Cor 8, 9). Paul is here urging the Corinthian saints to fulfil their promise to assist the poor in Judea. Three things can be noted here. One, poverty can be the lot of Christians, even faith-filled Christians, as the Jerusalem believers undoubtedly were. Two, God expects wealthier saints to help their poorer brothers.

Three, God does not promise to give to us to satisfy our greed, but to meet the needs of others. Philip Hughes reminds us that “as the whole context shows, the Apostle is speaking of the quality, not the quantity, of giving. The source of the giving is not the purse, but the heart, as the next verse makes clear.” Given the emphases of the seed-faith theology in particular, and the prosperity gospel in general, what Hughes goes on to say is especially relevant:

“Goodness brings its own reward and indeed leads to an increase of goodness. Nowhere, however, does Scripture propose the gaining of rewards as a motive for goodness. Giving for the sake of gain ceases to be goodness flowing from a simple and unselfish heart; it is then that very form of giving which the Apostle deprecates here – giving which is governed by covetousness.”

Verse 11 of chapter nine is also appealed to: “You will be made rich in every way so that you can be generous on every occasion, and through us your generosity will result in thanksgiving to God”. While the immediate context is again that of material giving, the wider context refers to the riches of God’s grace. As R.P. Martin comments, “‘You will be made rich’ … recalls 6:10 and 8:9. Indeed, it fixes the meaning of these references as Paul’s talking of God’s enrichments of grace, not material prosperity per se.”

Related to this passage is 2 Cor. 8:9, often appealed to in the prosperity literature: “For you know the grace of our Lord Jesus Christ, that though he was rich, yet for your sakes he became poor, so that you through his poverty might become rich.” Much of what was said above applies here also. Once again the context is the collection for the poor in Jerusalem. The riches promised in this figurative statement appear to be metaphorical/spiritual in nature. They speak of the riches of salvation, righteousness and the spiritual gifts Paul has been discussing throughout the epistle.

No serious commentator takes this verse to mean a simple promise of material wealth. The theological message is much more important and much weightier. In a few brief words, the pre-existence of Christ is here declared (but not defined), his incarnation and messianic task is set out, the matchless grace of God is exhibited, and the example set for believers is given. Such great and rich spiritual truths should not be watered down by such questionable interpretations.

Philippians 4:19 is another such text: “And my God will meet all your needs according to his glorious riches in Christ Jesus”. A simple reading of this text should be sufficient to answer the prosperity teachers. The meeting of need is promised here, not riches and wealth. As one commentator puts it, “God will grant all our needs – not all our greeds.”

Moreover, the context of this passage (4:10-20) undermines the whole prosperity doctrine. The context shows that Paul was in financial need, and it was only by the gifts of the Philippians that he was able to get through this testing time. According to the prosperity teaching, if Paul really had faith, he never should have been poor in the first place. But he clearly was.

Not only that, but even in that poverty and hardship, he was content (and presumably fully in the will of God!): “I know what it is to be in need, and I know what it is to have plenty. I have learned the secret of being content in any and every situation, whether well fed or hungry, whether living in plenty or in want” (Phil 4:12). Our position in Christ, not in the social ladder, is what matters.

The truth is, God doesn’t want us rich, or poor. He wants us holy. That is his main concern, that we be conformed to the image of his son (Rom. 8:29). If we can become that in wealth or poverty, fine. But if God knows that our ultimate end (conformity to, and fellowship with, himself) is best achieved by the absence of wealth or health, then he is quite willing to allow that to occur.

Success in this life, at least as the New Testament presents it, is not measured by material wealth. The values of the kingdom often turn on their heads the values of the world. As Proverbs puts it, “Keep falsehood and lies far from me; give me neither poverty nor riches, but give me only my daily bread. Otherwise, I may have too much and disown you and say, ‘Who is the LORD?’ Or I may become poor and steal, and so dishonor the name of my God” (30:8,9).

We must conclude that the prosperity gospel is a good reflection of modern hedonistic “me-first” culture, but is a poor reflection of the gospel message. We are here to serve and worship our Lord, not to see what material benefits we can weasel out of Him. A gospel which seeks to answer the question, ‘What’s in it for me?’ has got it quite backwards. The real question should be, ‘What’s in it for God?’

22 Replies to “The Prosperity Gospel”